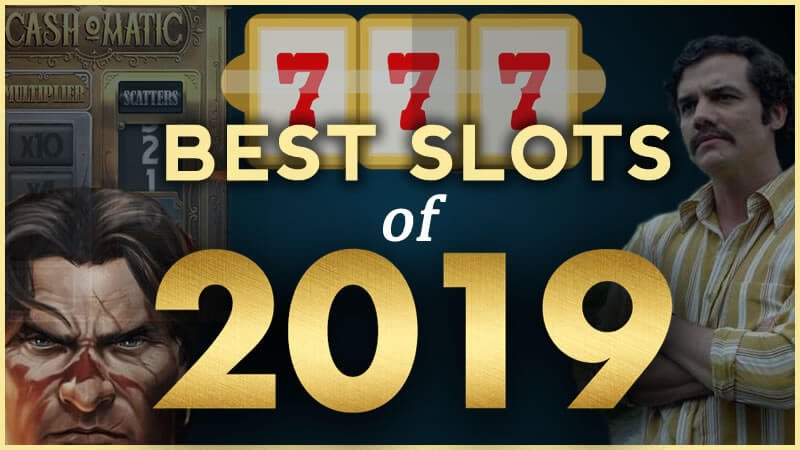 2019 was a great year for new slot releases. Below are our top 10 slot games of the previous 12 months, as rated by our reviewers. All these slots received ratings of 9/10 or higher and are well worth playing in 2020!

Two of the biggest trends of 2019 were slots using megaways mechanics, and slots based around Hasbro’s Monopoly brand. Big Time Gaming made the obvious decision to combine these two trends, and thus – Monopoly Megaways was born. This slot makes full use of the Monopoly theme, integrating the classic board game into the gameplay in a truly ingenious manner. Underneath the reels, part of the classic Monopoly board is revealed, and as you spin the reels, the Mr. Monopoly character will move around this board, adding houses, stations, utilities and community chests to your balance. You see the benefit of this when the free spins round is triggered, since the train stations and utilities you pick up in the base game allow for extra free spins and multipliers in the bonus round. Monopoly Megaways is the kind of well-thought-out slot we want to see more of in 2020, and our reviewers gave it 10 out of 10.

IGT released this slot out in time for Halloween, but Ghostbusters Plus was no rush job – this is a seriously entertaining slot which will appeal to slot experts just as much as movie buffs. Based on the 1984 blockbuster movie, this five-reel, 20-payline slot features symbols decorated with the Ghostbusters themselves, i.e. Spengler, Venkman, Stantz, and Peck. In the Ghost Battles feature, our heroes zap the ghoulish monsters to win you up to 10x multipliers. In the Zuul free spins round, these multipliers reach 25 times your stake, while expanding wilds cover all adjacent positions, and extra ghost wilds add 5 wilds to the screen. As well as being feature-packed, Ghostbusters Plus comes with one of the highest RTP values of 2019 – a mouth-watering 98%. It will come as little surprise that our reviewers gave this spooky slot game a perfect 10.

NetEnt had another strong year in the slot department, with Conan slot being the pick of the bunch. Aside from the beautiful graphics, this slot title gives players the flexibility to choose their own volatility level, allowing it to appeal to casual slot players and seasoned pros in search of a high payout. Mystery multipliers in the base game mean any winning spin can randomly be upgraded by 3x to 7x your stake. The free spins are triggered by landing 3 or more scatter symbols anywhere across the reels. So far, pretty standard – but Conan then gives you the choice of three games. The City of Thieves bonus comes with low volatility, Walls of Tarantia is a medium volatility game, and Temple of the Serpent offers large potential payouts – in return for high volatility. The thrilling theme, excellent gameplay and that ability to choose how much variance you can handle in the free spins round meant Conan slot picked up maximum rating from our expert reviewers.

Butterfly Staxx 2 is the long-awaited sequel to NetEnt’s slot of the same of the name from a few years back. Like the original, Butterfly Staxx 2 has a very calming theme, with gorgeous pastel-coloured flowers for symbols and a soundtrack straight out of an upper-class health spa. The gameplay ensures you don’t nod off, however, as it features plenty of wild substitutions and respins to keep you interested in the base game. Butterfly Staxx 2 also comes with two engrossing bonus features, namely Butterfly Spins and Butterfly Frenzy. In Butterfly Spins, active and dormant cocoon symbols land onto the reels, with the active cocoons transforming into beautiful (and high paying) butterflies. Butterfly Staxx 2 is a low variance slot with an RTP of 96.35%. You won’t get rich playing this one, but it’s a perfect slot to play when you are looking to relax. If you enjoyed the chilled-out theme of the first Butterfly Staxx title, then you will love the 2019 version. Our reviewers were big fans, awarding this slot another set of top marks.

Yggdrasil’s Yokozuna Clash is a sumo wrestler-themed slot game with the kind of cutting-edge graphics we have come to expect from this studio. But what sets this slot apart from other Yggdrasil titles is the clever way they have integrated the free spins round with the sumo theme. This round is triggered by landing just two scatters anywhere on the reels, and then you are randomly awarded a sumo fighter (Riku or Haru) who will compete on your behalf, with each of them having their own special features of, respectively, wilds or multipliers. A winning spin from left to right will see your fighter attack his opponent from left to right, while a winning spin from right to left will have the opposite effect. Eventually, one of these fighters will get knocked out, and if it’s your guy, the bonus round ends. However, if you manage to knock out your opponent, you move to the next level. In the third and final round, your opponent is Yokozuna himself, and he is a real tough guy, but should you prove victorious, your winnings receive a 2x multiplier. While this wasn’t the highest-payout slot of 2019, Yokozuna Clash is one of the best fighting-themed slots out there and received a solid 10 points from our review team.

Blueprint’s Thundercats Reels of Thundera slot is based on an 80’s cartoon series which was a big favourite of mine back in the day. It looks stunning, and the Blueprint designers have done an excellent job capturing the spirit of the series, with symbols including the Thundercats’ weapons such as swords and knives. What really sets this slot apart is the sheer number of bonus features that can be triggered, including several in the base game. Many of these are completely random – the Panthro feature sees this popular character link several reels together, ensuring they are all the same, and triggering a win. Meanwhile, Snarf adds bonus symbols to the grid, increasing the chances of triggering the bonus round. This bonus round provides you with the chance to spin a wheel and enter one of 6 games, including 3 free spins features. The pick of these is the Ultimate Thunder bonus feature, which comes with 10x multipliers and the potential for a big payout of up to 10,000x your stake. This Blueprint slot received 9 out of 10 from our reviewer, and if you are feline the urge for some 80’s cartoon nostalgia, then Thundercats Reels of Thundera is well worth a spin.

Cash-o-matic is a high volatility slot from NetEnt which – like the name suggests – has the potential to win you a ton of cash. In many ways, Cash-o-matic is a modern take on the classic slots of yesteryear. The symbols are made up of gemstones and card numbers, and the backdrop is a brass-plated one-armed bandit, while the soundtrack of a 19th Century funfair plays in the background. And yet, the graphics are stunning to look at. The gameplay is pretty awesome too, as it makes full use of NetEnt’s avalanche feature, so you sometimes hit several wins in a row. In fact, Cash-o-matic adds even more payout potential here, as the Level Multiplier feature gives you the chance to build up some epic wins in the base game. This slot received 9 out of 10 from our reviewer and it shows that simple slots can still be great fun if the potential payouts are there. 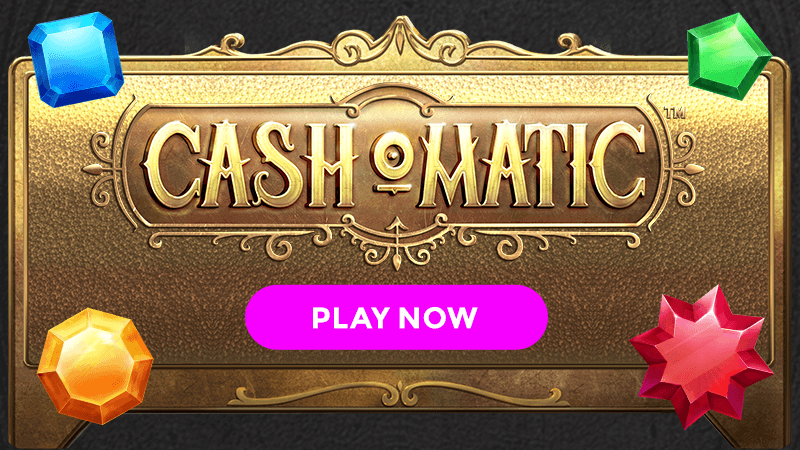 Play n’ Go always try to do something unique with every slot release, and in Game of Gladiators, the studio has really pushed the envelope in terms of gameplay. The base game has no less than 5 entertaining features, while the free spins round allows you to choose your own hero (Spartacus or Amazonia), who each have their own special strengths. You are allowed unlimited free spins too, with the two champions fighting to the death to win you a prize. Game of Gladiators also follows the modern trend of high-volatility and high potential payouts, with up to 5000x your stake up for grabs on any single spin – so will appeal to serious slot aficionados. The graphics aren’t too shabby either and Game of Gladiators is such an engrossing slot to play that our reviewers awarded it the maximum 10/10.

Netflix’s Narcos was one of the most-watched shows of the last decade, building up a huge fanbase of viewers fascinated by the real-life rise and fall of Pablo Escobar. NetEnt released an official slot game in the spring of 2019, wowing fans of the show and casual slot players alike. The 5 reels give players 243 ways to win, with symbols including the two DEA agents, various props from the show and Don Pablo himself. The base game is highly entertaining in its own right, but Narcos comes with a ton of extras, such as Walking Wilds, Locked Up and Drive-by features, as well as your standard free spins. Our reviewers gave Narcos slot a rating of 9/10, and I could play this one all day.

Age of the Gods Mighty Midas

Playtech’s Age of the Gods series is one of the most popular slot series around, thanks mostly to the linked progressive jackpots. This Mighty Midas slot is themed around the King Midas of Greek mythology, who famously had the ability to turn anything into gold with just one touch. While this rather odd skill brought him nothing but misery, we have a feeling you will love spinning the reels on this 5-reel, 40-payline slot. Midas touch symbols mean the symbol to the left of it turn into wilds, and if that symbol is already a wild, it turns into a 2x wild multiplier instead. This makes for some interesting fun in the base game, but as always, the big wins are found in the free spins round, which is actually made up of 5 distinct games – all of which are rather interesting. Our favourite is the Amethyst Spins feature, where all Midas Touch symbols are double stacked to get you more Wilds and Multipliers. As an added bonus, this slot has no less than 4 progressive jackpots available, meaning there is always the potential for a big win around the corner. Age of the Gods Mighty Midas received 10 out of 10 from our reviewers and is well worth a spin in 2020. 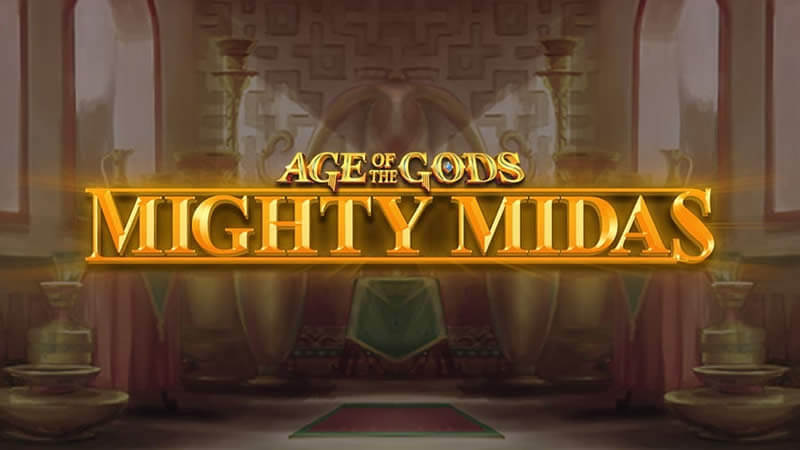 2019 was the year when slot developers started to put some real thought into their titles and started giving players the freedom to choose what kind of path they wanted to take. What do you think about this top 10 list of 2019 slot releases? Can you think of any slots which deserve to be on here?