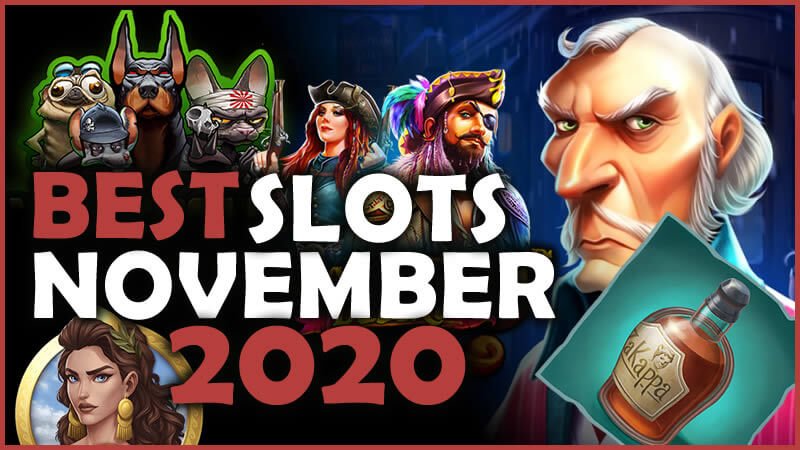 November was another strong month for new slots. As usual, studios started to release their Christmas slot selection, as well as plenty of high-volatility Megaways titles. Elk even came out with another game mechanic innovation in the shape of Nitro Reels, which promises to take the number of ways to win to a whole new level. But which new slot releases qualified for our coveted monthly best-of list? Read on to see which slots made the cut.

This Play n’ Go slot has a fantasy theme that will appeal to fans of dragons and big wins. The setting is a cavern filled with gold coins, and symbols are made up of variously coloured gemstones, as well as the highest-paying dragon. Landing a golden dragon awards you a respin with expanding reels. The bonus feature sees you play with 8, 15, or 20 free spins (depending on how many diamond scatters land), and gold dragons are collected in a meter, leading to extra rows that stay in place throughout the duration of the round. Treasure chest wilds also play a key role here, leading to multipliers of up to 64x. What kind of payout potential does all this mean? Well, the clue is in the title – a mammoth 24,000x, which is insanely high for this studio.

NetEnt has repackaged the popular Twin Spin slot for the megaways generation, and it works really well. The idea of twin spins (that two randomly assigned adjacent reels receive the same symbols) is that paylines are easier to form, and when combined with the megaways mechanic, wins are never far away.  Between 2 and 7 symbols land on each of the 6 reels on each spin, including classics such as cherries, bars, and bells. Unlike the original, this slot comes with a free spins round, with a massive 38,000x potential. It’s nice to see old school slots get pimped out with modern features, such as avalanches and multiplier wilds, and we hope NetEnt focuses much more on this kind of action in 2021.

Play n‘Go is well-known for designing beautiful slots, and Rise of Athena is no exception. It’s a simple 5 reel, 3 row grid, but the backdrop (ancient temple), symbols made up of Greek mythological figures (Pegasus, Athena herself, and the owl as the scatter), and impressive soundtrack exude quality. The main feature in the base game is the multiplier wilds, which keep your balance steady while aiming for the free spins round. Here, wilds stay in place, with the multiplier reducing by -1 on each subsequent spin. It’s a simple enough feature, but these multipliers can actually build very decent bonus wins. And this slot just looks so great.

This Pragmatic Play slot is a bit of an enigma, since it is a sequel, with fewer features than the original – not more. The biggest thing missing is a free spins round. And yet, this slot works well. For a start, the graphics are much nicer than the original, and the symbols of coins, parrots, maps, and pirates really pop out at you. And the features which are there are entertaining enough. Eight or more money bag symbols trigger the Lucky Treasure Bag feature – here those money bags are locked in position, and 3 respins happen, with further coloured money bags landing on the reels. Each of these colours being its own rewards – for example, green bags add multipliers. This feature triggers rather often and is where the bigger wins will happen. The stats are pretty impressive too – an RTP of 96.48% and a max payout of 15,000x are thoroughly decent, more than making up for the absence of a free spins round.

Nolimit City’s Warrior Graveyard was released a few days after Halloween, which is a real head-scratcher, as it is the spookiest slot of the year so far. The sequel to Barbarian Fury sees us enter the last resting place of the losing combatants of that mighty battle, with the symbols made up of their skeletal remains. It’s spine-chilling for sure, helped by a haunting soundtrack. But of course, we are here to get paid, and this is where Nolimit City’s xNudge mechanic comes into play, where 3 position high tombstone symbols carry multipliers of up to 1800x on a single spin – not bad for a base game win! There are a couple of free spins rounds too, with the most lucrative being the Death Spins, with `4 free spins, sticky wilds, and incremental multipliers.

This new Elk Studio slot comes with their patented Nitro Reels, giving players up to an incredible 85 million ways to win. It’s a fine-looking slot too, set in what looks like an oil refinery, and the pumping EDM soundtrack is worth listening to in its own right. The symbols are made up of animal gang members – these include dirty dawgs, gritty kitties, pug thugs, and rogue rats, with the wild represented by a nuclear explosion. The most notable feature is the randomly triggered Nitro Reels. These are special symbols covering 2 positions, and a number (up to 12) showing how many actual symbols are in there. Each win triggers a respin, and the free spins are where the biggest wins will come, as any nitro reels are locked into place for the duration of the round. Nitropolis comes with a healthy RTP of 96.1%, and it will be interesting to see where this studio takes the massive amount of ways to win in future releases. Is it just a gimmick that works well due to the fun theme? 2021 will the proof of the nitro reels concept.

This highly volatile Relax Gaming slot has an Egyptian-theme, where an intrepid adventurer explores a pyramid populated by reactivated mummies. Symbols include beautifully rendered cat, alligator, and bird heads, the sphinx, the mummy as the wild, and the explorer as the scatter. Features include a random sandstorm which adds mystery symbols across the reels and a free spins bonus round which is actually rather different to most. Just two scatters are required to trigger 6 free spins, but extra scatters are turned into mummy wilds when the round begins. New explorer symbols that land during subsequent free spins see these wilds receive a multiplier of +1, as well as an extra free spin. In this way, the bonus becomes incrementally more profitable with each new spin, leading to a potential 50,000x max payout.

Another high volatility slot from Relax Gaming, Iron Bank slot is a bank-heist themed game set in some Latin American country, where a team of cartoon jaguars attempts to get rich fast or die trying. The theme might sound crazy, but the gameplay is simple enough, with a fairly standard 6×4 grid and 4096 ways to win. Symbols include cigars, bottles of whiskey, bananas, vases, and the (highest-paying) bulls, all designed in the same cartoon style. The base game is packed with random features such as full wild reels with multipliers of up to 10x, random mystery symbols, and random bonus symbols. The free spins round comes with several options to choose from depending on your appetite for volatility and has potential payouts of 50,000x.

Blueprint continues its series of comedy cartoon slots with a second Rick and Morty title. No megaways this time around, but like Blueprint’s Beavis & Butthead slot, there are a ton of bonus features loosely built around elements from the show. There are no less than 8 random modifiers to brighten up the base game, including mad scientist Rick using his laser beam to spread mystery symbols and colossal 3×3 symbols across the reels, as well as converting losing symbols into winning ones. Bonus games occur regularly too – we particularly enjoyed the Pilot Bonus, a picking game to reveal multipliers and upgrades, while there are also 3 free spins bonus games. That said, this slot does come with just a 5000x max payout, so will not be a go-to slot for hardcore casino veterans. On the other hand, fans of the show will find plenty to amuse them.

Last but not least comes this Christmas-themed megaways slot from Pragmatic Play, based around the classic Dickens story. In terms of gameplay, this is a reskin of Great Rhino Megaways from the same studio, with a 4-5-5-5-5-4 grid, over 200,000 ways to win, and a tumble feature. But what a gorgeous reskin! The premium symbols are made up of Bob Cratchit, Tiny Tim, and the three ghosts – with the ghost of Christmas-still-to-come looking particularly mean. Scrooge is the wild, and his pocket watch is the scatter. Four or more of these are required to trigger the free spins, although an ante bet option increases your chances of getting there. With a decidedly un-scrooge like 20,000x max payout, this is one Christmas slot we could spend all Christmas Eve playing – if only to avoid being woken up in the middle of the night by the 3 ghosts. 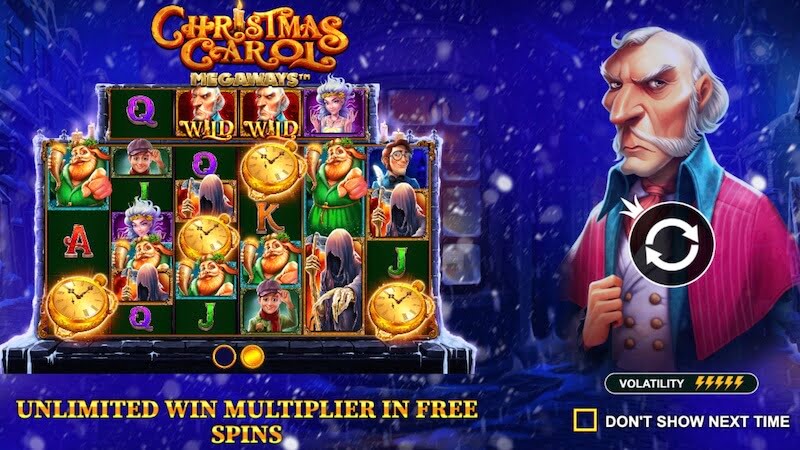 November was a decent month for new slots. With 2020 almost at an end, we look forward to December, when developers usually pull out all the stops to create innovative and thrilling slots for the holiday season.