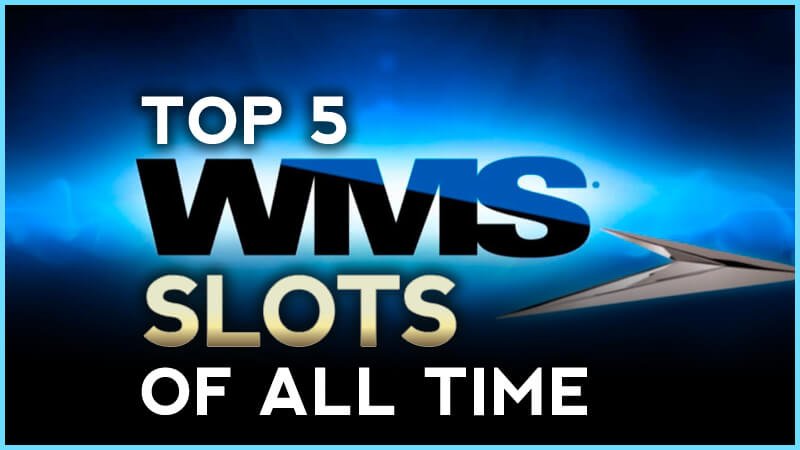 Williams Interactive (WMS) has been a big name in entertainment since the war, starting off making pinball machines way back in 1943. In the mid-nineties, WMS entered the slot game, became one of the dominant providers of games on the Las Vegas strip. And when the internet came along, WMS quickly jumped on the bandwagon – making some of the most fun, unique online slots on the market. Slots from this provider often come with built-in jackpot prizes, making the payouts on WMS games very lucrative. Here are the five best WMS slots of all time (in our humble opinion).

Elvis saw out his last singing years crooning to casino-goers in Las Vegas, and WMS has immortalised the King of Rock n’ Roll in this fairly unique 12-row slot game. There are 60 paylines in total here, with the Aloha Free Spins feature giving – well, you guessed it – some free spins. The Elvis Lives Bonus gives you the chance to win a very nice 2,000x your stake, as does the TCB feature, giving this slot a decent enough overall RTP of 95.72%. With the soundtrack made up of a medley of his greatest hits, such as Jailhouse Rock and Heartbreak Hotel, fans of ‘50s rock will get all shook up when playing the Elvis Lives slot.

WMS’s main strength is their franchise deals with some of the biggest brands in the world of entertainment. WMS was one of the first to licence Hasbro brands, with Monopoly-themed slots found in the lobbies of every Vegas casino. Monopoly Grand Hotel is one of the better ones, and the online version is pretty fun too. The design is fun and brash, with the symbols featuring all the things you could buy if you were Mr Moneybags, including yachts, airplanes and flash cars. In terms of gameplay, Monopoly Grand is feature-rich, with free spins and a jackpot which will win you between 10x and 1,000x your bet.

Raging Rhino is one of the classic slots of the bricks-and-mortar casino scene. When WMS released an online version in 2014, it received huge acclaim, thanks to its wildlife theme and many epic wins uploaded to YouTube. The Raging Rhino Megaways update stays faithful to the original while upgrading the graphics and adding in some extra touches. Now the reels have a cascade feature, and of course, slots fans now have no less than 117,649 way to win – meaning you have the chance of a big win even while playing the base game. Four or more diamond scatters qualifies you for the free spins feature, where the Raging Rhino Multiplier can win you over 10,000x your stake.

It’s been 80 years since the Wizard of Oz movie hit the silver screen, so this list wouldn’t be complete without an Oz-themed slot. WMS has produced a few such slots down the years, but the best of them is the Emerald City title. Fans of the 1939 movie will recognise many of the characters in the symbols, with Munchkin, Toto and the Gatekeeper all featuring. The Glinda the Good Witch Free Spins Bonus triggers randomly and is worth 5 free spins, but our favourite feature is the Emerald City Picking Bonus. This game is split into 6 levels, and as you progress up each level you will get closer to a top prize of 1000 credits.

Desert Cats focuses on the furry felines of Ancient Egypt. On the surface, WMS’s Desert Cats doesn’t do much to stand out from the hundreds of other Egyptian-themed slots. As you would expect, the Sphinx, Tutankhamun, and mysterious tablets all make an appearance, and the graphics are more “old school” rather than high definition. But don’t judge a book by its cover. Desert Cats has an intriguing game play with no less than 7 reels and 50 paylines. The Golden Cat Head wild appears as a 2×2 symbol, and if you spin cats with six or more red gems above their eyes, you are in line for a jackpot win. Collect 10 red gems to win 2,000x your stake.

Which of your favourite WMS slot games do you feel deserves to make this list of the top 5? Let me know in the forum.