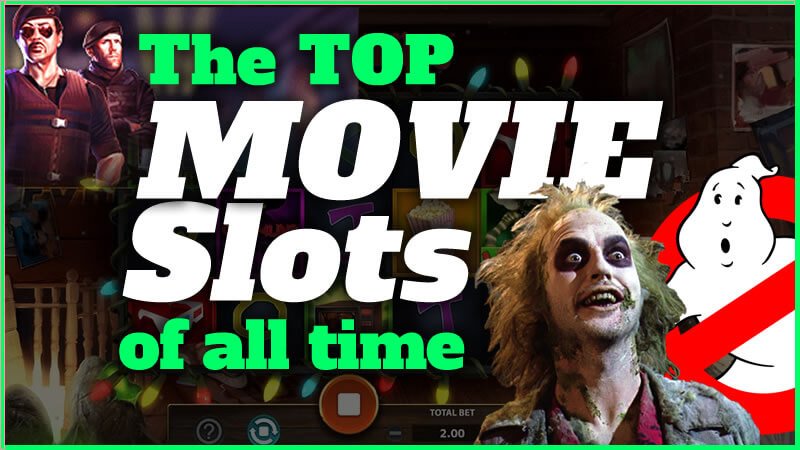 Movie slots are always popular choices among casino fans, and developers certainly go out of their way to satisfy the demand. Whatever your favourite film or film franchise, the chances are that there is already an official slot released for you to play along. Here are 5 of the best movie-themed slots as of August 2020.

The Ghostbusters franchise was one of the most popular in the ’80s. While the recent female-led reboot received some mixed reviews, thankfully IGT chose to focus their slot around the original story and characters. A unique level-up feature gives players the incentive to keep on spinning those reels, collecting ghosts that later go towards the Zuul free spins. This slot also features a jackpot with a max payout of 25000x. Amazingly for a movie slot, Ghostbusters Plus comes with an astounding theoretical RTP of around 98%. Combined with the thrilling gameplay, this slot is one of the best movie-themed casino games ever made.

Sausage Party is a riotous comedy from 2016 which became the highest-grossing R-rated animated movie of all time. Now a cult classic, you can enjoy the spirit of the film in this slot from Blueprint Gaming, replaying scenes from the film in the many available features. Chief among these is the Even Greater Beyond Bonus, where 500x multipliers come into play. The base game also comes with 6 modifiers, so there is rarely a dull moment while spinning the reels with this title. With so much fun packed into Sausage Party slot, you might think it comes with a low RTP or max win. But that’s not really the case – the slot has an OK-ish 95.95% average return, and a massive 50,000x max payout. If you like irreverent humour and plenty of features, then you need to give Sausage Party a chance.

Of all the 80’s movie franchises, Gremlins is perhaps the most loved. The concept of cute little critters who turn into monsters after midnight is one that all kitten owners can relate to. This slot from Red7 does an excellent job of giving fans of the film plenty to enjoy. The base game takes place in Billy’s bedroom, where the reels are filled with items from the film (drinks, popcorn, and microwaves) as well as the gremlins themselves. We really like that the bonus feature takes place in the town cinema, where we can select from several free spins rounds, plus a picking game. We also like that the RTP on this slot is 96.47%, meaning it will be a draw for casino veterans as well as fans of the Mogwai.

The Expendables movie franchise has managed to prolong the shelf-life of elderly tough guys like Sly Stallone, Dolph Lundgren, and Mickey Rourke, as well as spawn a couple of slots from Stake Logic. The first of them was a lot of fun, but this megaways version packs rather more of a punch. First of all, it looks great, with the 6 reels spinning on a backdrop of what appears to be a bank vault, while Stallone himself randomly shows up to throw grenade modifiers and produce some decent wins. The free spins bonus feature benefits from increasing multipliers, and the game comes with a gamble feature as well as a Super Stake. What we really like about Expendables: New Mission is how it encapsulates the tension of the film itself – so action movie fans should lap this slot up.

Another Megaways slot, this time centred around the 80’s Tim Burton movie Beetlejuice, starring Michael Keaton in the titular role of a comical ghost. Although there are only 5 reels (rather unusual for a megaways slot), after any win the full grid opens up, with as many as 12 rows, producing 248,832 ways to win. In the base game, Beetlejuice himself is the highest paying symbol. Free spins come with unlimited multipliers, incrementing with each cascade, and the max win is a thoroughly reasonable £250,000. As Keaton says, “It’s Showtime”.

The truth is, we could have made this best-of list a top 10 or top 20. There are so many great movie slots out there. Other contenders would include Playtech’s Gladiator or Microgaming’s Jurassic Park. We think the 5 slots above strike the balance between being faithful to their film and raw playability. Which movie slots would make your top 5? Let us know in the online slots and casino forum.