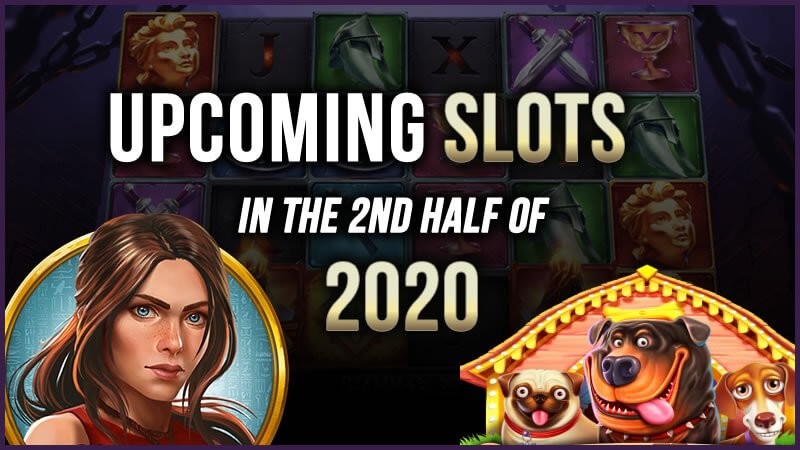 2020 has been an incredible year for online slots. Developers have (so far) not suffered from a lack of creative ideas when it comes to new game mechanics or meshing gameplay with the themes of the games themselves. Can they continue the creativity in the second half of 2020? Will the megaways trend start to feel old hat by Christmas? We don’t know the answers to those questions yet – but the upcoming slot releases below are the ones we are most excited about.

Rich Wilde’s Book of Dead slot has been one of the most popular online casino games of the last decade and Play n’ Go seem to want to milk the franchise for all it’s worth. This time we join Cat Wilde, as she follows in her father’s footsteps, exploring the pyramids for big wins. The previews tell us that the design is as gorgeous as ever, the bonus feature comes with unlimited free spins, and expanding symbols are the key to unlocking the max payouts of 5000x on this medium variance slot.

The original was a big hit in the spring of 2019 and is still a favourite of many of the top streamers. This Megaways version is likely to go the same way, as it keeps most of the charming canine symbols from the original such as pugs, rottweilers and Shih Tzus, but pumps up the volatility. That being said, previews show that the modifier bonus reel is now gone, and Doghouse Megaways has left the cascade function behind. Will that make the base game less exciting? Maybe, but the free spins round on this latest version comes with a choice of either sticky or raining wilds. We love some options when it comes to bonus rounds, so we suspect Doghouse Megaways will be something for us to stick our teeth into.

Play n’ Go seems to be obsessed with building slots around metal bands. When these music-themed slots feature obscure Nordic bands we have never heard of (Candlemass, Sabaton), then we aren’t too impressed. But give us some Twisted Sister and the game is well worth a spin. In the Saxon release, we get to hear the sounds of this legendary British rock band, and many fifty-something slot fans are sure to appreciate that. In terms of gameplay, we can’t tell you much, other than this seems to be a five-reel slot where wilds are the key.

The third promising Play n’ Go slot of the summer months, Blinged seems to be very much in the vein of their previous releases Pimped and That’s Rich. If you enjoyed the luxury and glamour of those slots, you are likely to love Blinged. Banknotes, gold rings, gold shoes, and three glamorous models make up the symbol, while even the low-pay symbols om Blinged are encrusted in diamonds. We should get more of a clue of the gameplay closer to the release date, but we do know that we will get respins with unlimited multipliers.

Summer wouldn’t be summer without a NetEnt release, and this time around the Swedish studio has plumped for a sequel to their popular Miami Vice-inspired Hotline. The slot maintains the classic 80’s graphic style, while the crime-fighting duo (clearly inspired by Crocket and Tubbs) is back to search for the notorious thief Kitty Weiss, as well as some decent wins. The game makes use of the same crime zone mechanic as their recent Cash Noire slot, where any wilds that land within the zone expand to cover the whole reel. We enjoyed that feature in Cash Noire, and love the 80’s style, so look forward to trying this medium volatility slot.

Sure, it’s yet another sequel, but Valley of the Gods was one of Yggdrasil’s best, so we can’t wait to see what they do with the follow-up. Previews show the same scarab-covered blocks, but an unusual layout of six reels which have an expanding number of rows from left to right, as well as three modifier meters that control wilds, multipliers, and lives. It looks pretty intriguing to us, and we can’t wait to get spinning it.

We recently complained of a lack of Roman mythology slots, so we are very much looking forward to Hammer of Vulcan. Quickspin’s slot is based around the Roman god of fire and metalworking, and we spin the reels in what looks like his workshop. It’s dark and scary in there, but proceedings are certainly brightened up when you trigger the Light the Forge feature, which comes with unlimited free spins and multipliers.