4 Reel Kings is the classic arcade and bingo slot machine that originally featured a £500 jackpot. Nowadays this enjoyable slot machine has undergone an upgrade and can be played online at the Bell Fruit Casino, retaining most of its original form but undergoing a jackpot increase and a better return to the player with a higher percentage.
The 4 Reel Kings slot machine has stakes as low as 1p, up to £40 for a single spin with twenty winlines and one bonus feature.

4 Reel King gets its name from the fact that you are basically playing four slot machines with every spin. I didn’t like this concept when I first played it on £500 jackpot, but it has since grown on me. I’m a big fan of these Reel King slots, the simplicity and near misses add an element of excitement that pulls me back for more. The online version which you can play for free or real money HERE retains all of the original, and most enjoyable aspects. 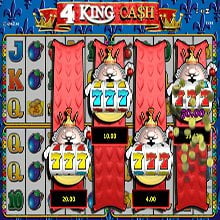 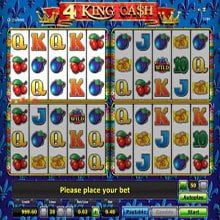 As the reel game is so basic, there isn’t much going on except hoping for winning combinations on any of the single or multiple winlines. The biggest anticipation comes from the 4 Reel King Reel Kings feature which can be won on any one of the four slots. This feature is activated either randomly after any spin, or by landing the letters across all of the five reels. Once active, between one and five bonus mini slots will appear, each capable of paying up to a massive 500 times your stake. The more mini slots you have, the higher your win, with each mini slot having a series of coloured sevens, as well as diamond symbols. The bonus mini slots will spin a win every time until a losing spin appears, at which point that slot is eliminated. Once all of the bonus slots have been eliminated, you will be returned to the standard game with your winnings added to your bank.
The winning potential of this feature is huge, but it can be low. Each spin is a multiplier, so the higher your initial stake, the higher the winnings will be.