Age of the Gods Medusa and Monsters Slot

Age of the Gods Medusa and Monsters slot is another addition to the Age of the Gods series from Playtech. This time they’ve gone with Medusa and some other creatures including a Minotaur which at first I thought was kind of strange but it works. Being a fan of Greek mythology myself, I liked the idea of this slot and was very pleased to discover that they’ve actually applied some of the mechanics of the game to tie in with the theme, so bonus points there.

The first thing you’ll notice upon starting the game is the number of positions on the screen with a 6×6 layout, much larger than the stand 5×3. There are 164 paylines here, and an RTP of 96.09%. I like how they’ve gone for something a bit different here as it helps to stand out from some of the competitors. I feel as though the graphics and overall appearance of the game could be more exciting, but it doesn’t look bad by any means. To play the game you must simply spin the reels to try and get a winning combination using the base symbols from left to right. These symbols are listed as follows, ranked in ascending order based on their value:

In addition to these symbols, you also have Medusa as the Wild symbol and when she appears she will fill the entire the reel with Wild symbols. These symbols will substitute for all other symbols in the game apart from the Scatter symbols. 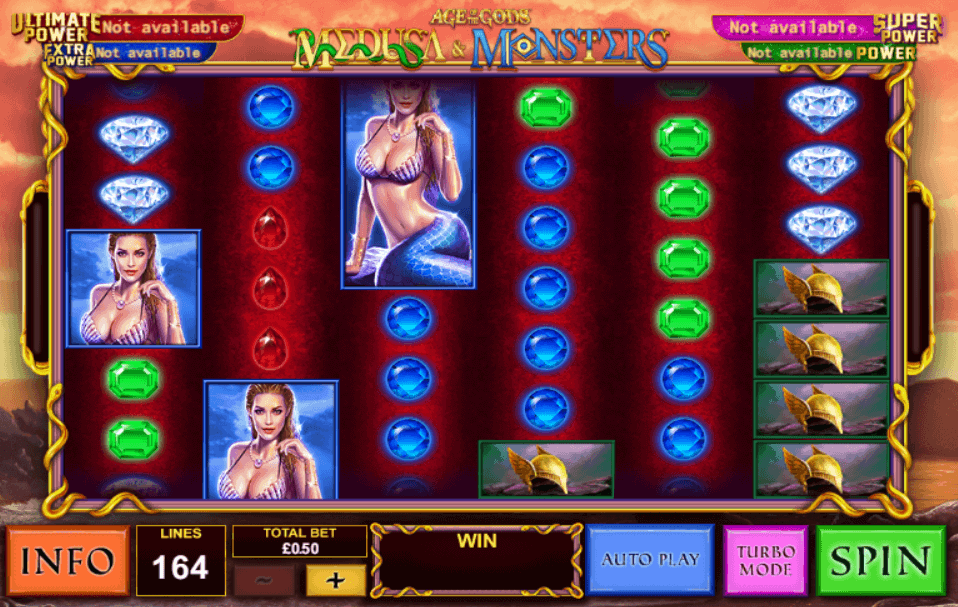 Age of the Gods Medusa and Monsters Slot Bonuses and Features

Medusa’s Gaze Free Games. This is triggered using the Scatter symbols which are stacked 2 high on reels 2, 4 and 6. If you manage to land the symbols on all 3 of these reels, Medusa’s Gaze Free Games will be triggered. Now you must pick a shield in order to reveal on the high-value symbols. In keeping with the actual story of Medusa, when this symbol lands on the reels she will freeze it in place. Medusa will start at the furthest right reel and after every spin will move 1 reel left. The previously chosen symbol will unlock when Medusa moves onto the same reel. The Free Games Bonus is over once Medusa lands on reel 1. There’s potential for some decent payouts here especially if you pick a very high-value symbol, and I really like how the bonus works in keeping with the theme.

Age of the Gods Jackpot. There are 4 Jackpots available in this game: Power, Extra Power, Super Power and Ultimate Power. Any of these Jackpots can be won randomly at any time during a game, even spins that don’t give you a win. However, the more you bet the greater your chance of entering the Jackpot Game. The game works by presenting you with a 4×5 grid of 20 coins, each hiding a different Jackpot symbol behind it. You must click on the coins to reveal the symbols, and 3 identical symbols will award you the corresponding jackpot. If you enter the game, you are guaranteed a win although you are on a timer and a Jackpot will be awarded for you if you are not quick enough. 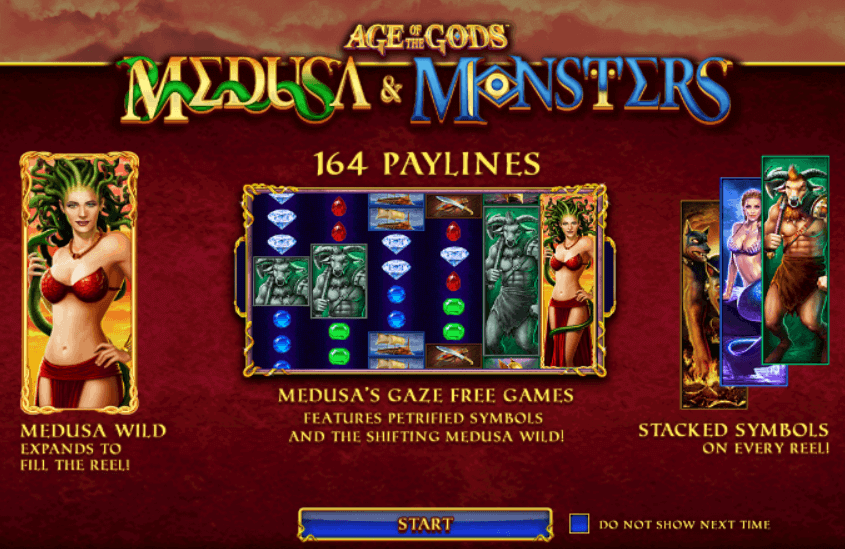 Age of the Gods Medusa and Monsters slot, despite having a long and confusing name is actually pretty simple. What I like most about this game is the way it ties in so nicely with the theme. I think Playtech have been very creative here with things like freezing symbols in place, although I do wish they had added a few extra features, even just small ones. As it stands, the Free Games Bonus (and of course the Jackpot) are the only ways to make decent money, although the expanding Wild feature can be decent. In short, I like the design and the mechanics which work well with the theme, but I think the actual gameplay could be more in-depth and also offer some better payouts.