Almighty Reels: Garden of Persephone slot is a new game from Novomatic that continues the Almighty Reels series from the previous Realm Of Poseidon slot. This game is almost identical save the new Goddess, Persephone. For those of you who don’t know much about Greek Mythology, Persephone is the Queen of the Underworld alongside Hades and is the daughter of Zeus and Demeter. Her story is somewhat tragic, as after her mother Demeter denied Hades the chance of marrying her, he instead opened up the Earth and grabbed to take her into the Underworld to be his Queen. After much deliberation and anger, Zeus finally conceded that Persephone would spend half of the year with Hades and the other half with her Mother.

Knowing a bit about the history of the Greek Gods isn’t really necessary, so let’s focus on the more important stuff. The design of the Almighty Reels: Garden of Persephone is identical to the previous game in the series which may or may not be a bad thing depending on who you are. Personally, I think it’s alright but nothing spectacular. The gameplay is also similar and I’ll come onto the features in more detail shortly. All you really need to know is you have a 5×3 set of reels with 25 paylines, and your aim is to spin the reels to try and get a winning combination from left to right using the base symbols. These are listed as follows, ranked in ascending order based on their value: 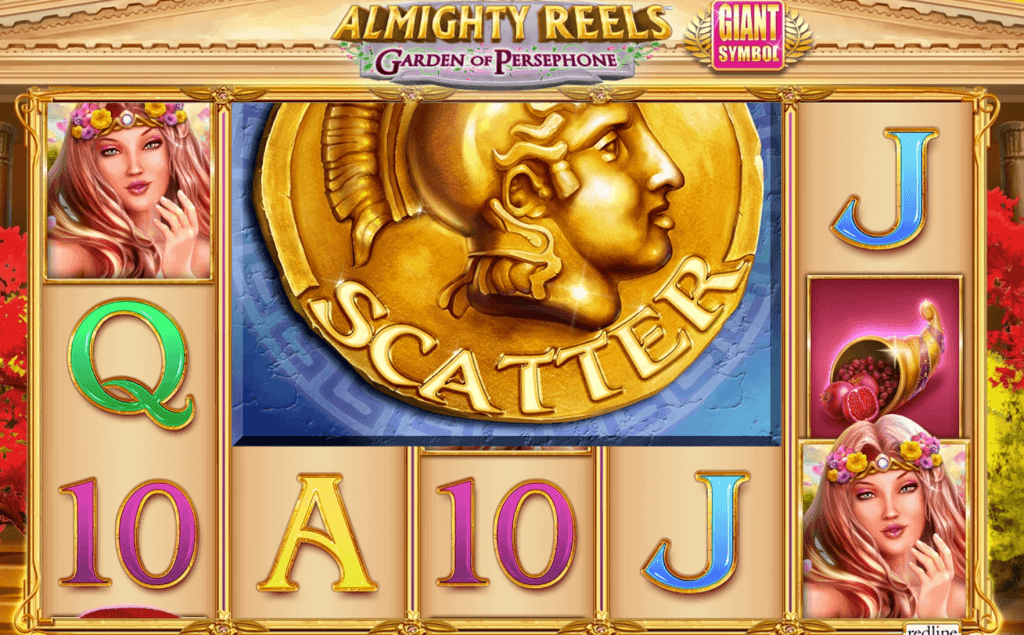 In addition to these base symbols, Almighty Reels: Garden of Persephone slot also has a Wild symbol in the form of a temple. This will substitute for all other symbols in the game apart from the Scatter symbol. This is shown as a Golden Coin and is 3 reels wide. When in full view, it can be used t trigger the Free Games Bonus.

Free Games Bonus. As mentioned, this is triggered by the Scatter symbol appearing in its entirety on the reels. This is the main, or rather, the only bonus in the game as is the main attraction to the slot. Once triggered, you’ll be awarded with 10 free spins and the game will then choose for you a symbol from the Cornucopia, Harp, Vase, Helmet or even Persephone to play as a Giant symbol through the bonus. The Giant symbol truly is Giant, covering 9 positions in total on reels 2, 3 and 4. This can lead to bigger wins of course, and with Persephone, the highest value symbol in the game, you can actually win up to 100x your bet on each free spin (but don’t count on this happening all too often). 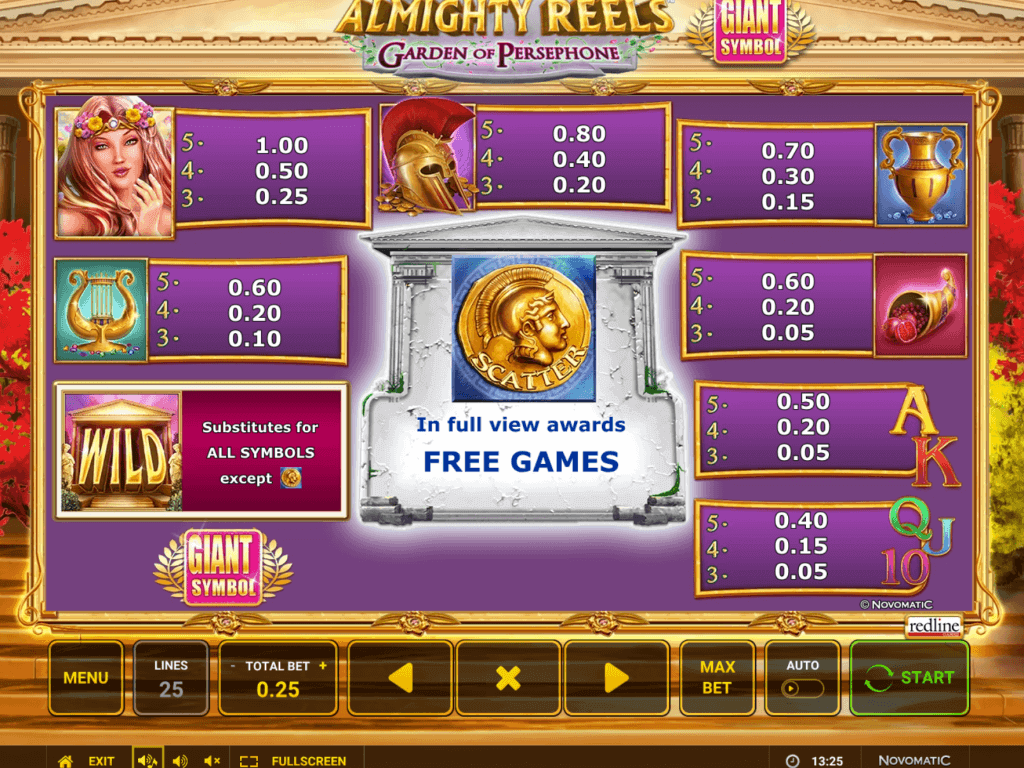 Unfortunately, that’s all there really is to say about Almighty Reels: Garden of Persephone slot. Novomatichave continued the Almighty Reels series this time introducing a new Goddess, but the gameplay itself remains unchanged. For some that might be a good thing, but I would really have liked to have seen more features included this time. The Free Spins Bonus works well as is the reason for the popularity of previous slots in the series, but when comparing this game to the many others out there, I just don’t think it’s as fun or rewarding. I especially would have liked to have seen some higher value symbols in the game to increase payouts. If you enjoy a relatively low variance slot and like the free spins feature, by all means, give this new game a go, but I don’t know if it will be that appealing to everyone.