Astro Pug slot is the latest game to come from Lightning Box and that makes us very excited indeed. We’re a pretty big fan of this relatively up and coming software developer here at StopandStep, and this time they’ve really gone the extra mile to offer some unique and exciting gameplay. The theme is pretty unusual, being a mix of Chinese symbols and an astro pug which I don’t really understand but have no issues with. The main attraction of course though is the unique reel layout which makes the gameplay much more interesting, and I’ll come onto more how that works shortly. All you need to do though is spin the reels to try and get a winning combination from left to right using the base symbols, which I’ve listed below in ascending order for you:

No, it’s not a mistake that there’s no 10 mentioned above, it really is just 9 or Jack. On top of these base symbols, as you’d expect, there’s a Wild symbol shown as Astro Pug himself. He appears only on reels 2, 3 and 4 during the base game and reels 2 and 4 during the Free Spins Bonus. He will substitute for all other symbols in the game apart from the Scatter symbols and other Wild symbols. The Scatter symbol, as well as being the most valuable symbol in the game when in a winning combination of 5 or more, is also used to trigger the Free Spins Bonus.

Reelfecta. You’ve probably noticed already that Astro Pug slot is comprised of what appears to be 8 reels, but in fact it has the more standard 5 but reel 3 is just formed of 16 positions and is known as the Reelfecta reel. Each symbol that appears on this reel can only be used once in a winning combination.

Bone Multiplier. If a Bone Multiplier appears that it will transform into a multiplier of 2x, 3x or 4x as well as function as a Wild if it substitutes for a symbol in a winning combination. It only appears on reel 1, but can appear during the Free Spins Bonus and Mega Spin.

Mega Spin. A Mega Spin will turn all positions on reel 3 into Wild symbols, giving you a chance to win some pretty big rewards. It is played at the bet that triggered the bonus, and will end the Free Spins Bonus once completed. 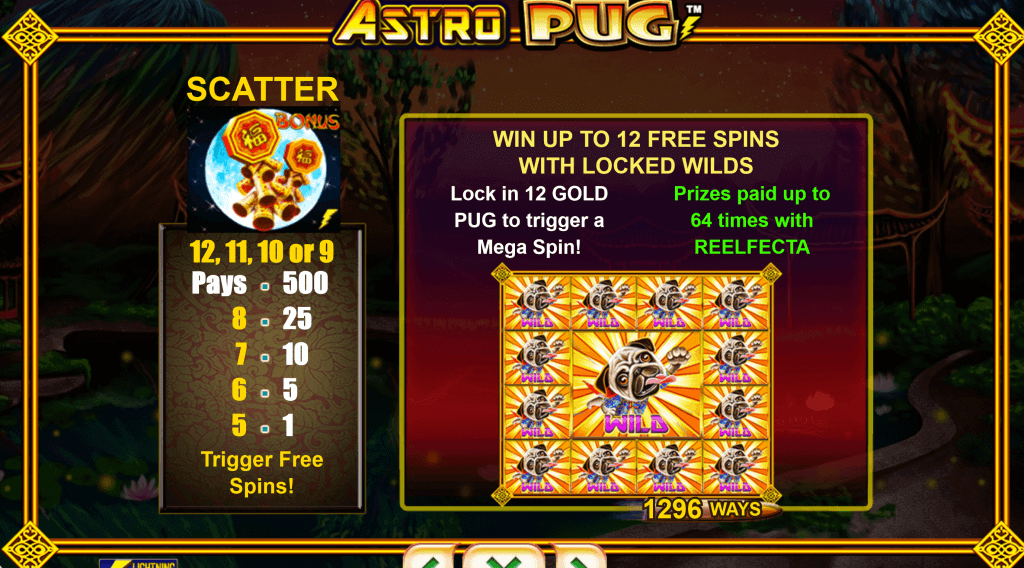 Astro Pug slot by Lightning Box is even wackier than their previous offerings like Lightning Horseman slot. They’ve really gone all out here with offering a unique and entertaining gameplay and I have to say I think it’s paid off. It has some of the more popular features like multiplier and sticky Wilds, but it uses them in a way that we’ve never seen before and that makes playing the game quite exciting. In regards to the payouts, it’s not bad either and if you manage to get a Mega Spin you could certainly be in with a chance of some big payouts. I personally think this game is great fun and worth a try, so be sure to check it out at Casumo as soon as you can.