Ave Caesar slot comes to you from Leandar Games and with it plenty of features and even progressive jackpots for lots of ways to win money. There’s a real story to go with the Roman theme here and the features are very entertaining, something you rarely see these days. It can be quite confusing to understand what’s going on like with some SG games such as Kronos Unleashed slot, but fortunately you don’t really need to. Just watch as hopefully the money comes in. All you need to do is spin the reels to get a winning combination from left to right using the following base symbols, ranked in ascending order based on their value: 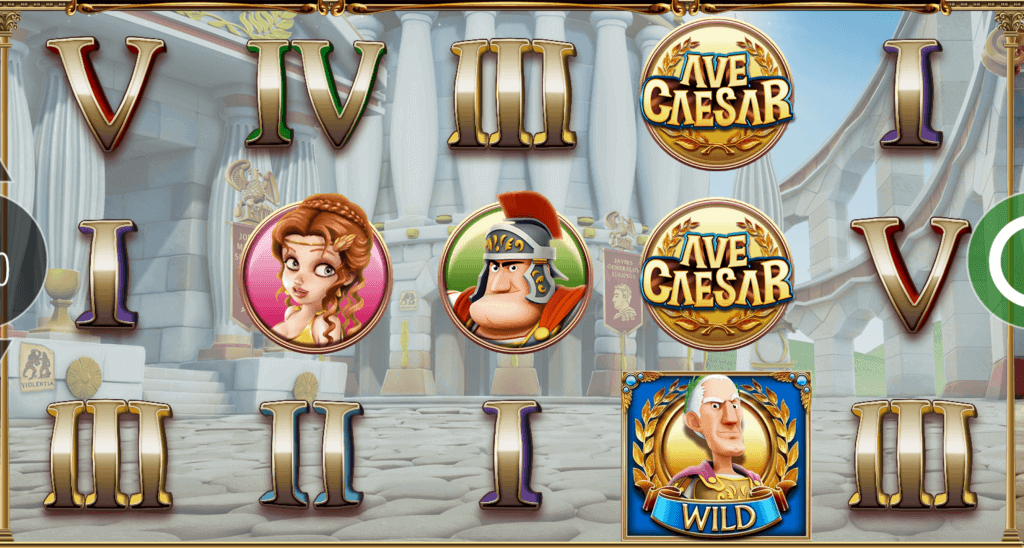 Hannibal’s Heroes Feature. This is an in-game feature which can occur on any random spin. Hannibal will try to call his army of elephants with his horn, and if you’re lucky they will come and run across the reels, causing Wild symbols to fall in from the top of the screen, leaving one or more columns Wild with potentially some other Wild symbols added in different positions also at the end of the feature.

The Gaul Feature. Another random feature that can occur during the base game, a Gaul can appear at any time. He will call his village who will try and knock him down. Trying to stay up, the villagers will throw stones which could hit some of the symbols on the reels, turning it into a mystery symbol which, at the end of the feature, will all become the same random symbol. What’s more, you may be lucky and have a multiplier applied to the spin.

Ave Caesar Feature. Caesar, being the demanding ruler he is, can appear at random and demand some winnings. You will then be able to choose from 6 mystery options which could be:

Centurion Maximum Feature. A centurion may appear at random to call in his troops which will align themselves along the divisions between the reels, hitting the top of the reels to make some pennants fall to create either 2×2 or 3×3 symbols.

Bonus Triggering. If 3 Bonus symbols appear at any point at the same time, you will be awarded the bonus that is determined by the bonus symbol appearing on reel 5. This could be either the Caesar Conquest Bonus, the Roman Empire Bonus, the Glory of Rome Free Spins Bonus or the Druid Free Spins.

Jackpot King. Finally, you also have the option to win a bonus in any spin. Simply collect crowns to get a bigger multiplier, and enter the Wheel King for a chance to win a progressive jackpot. 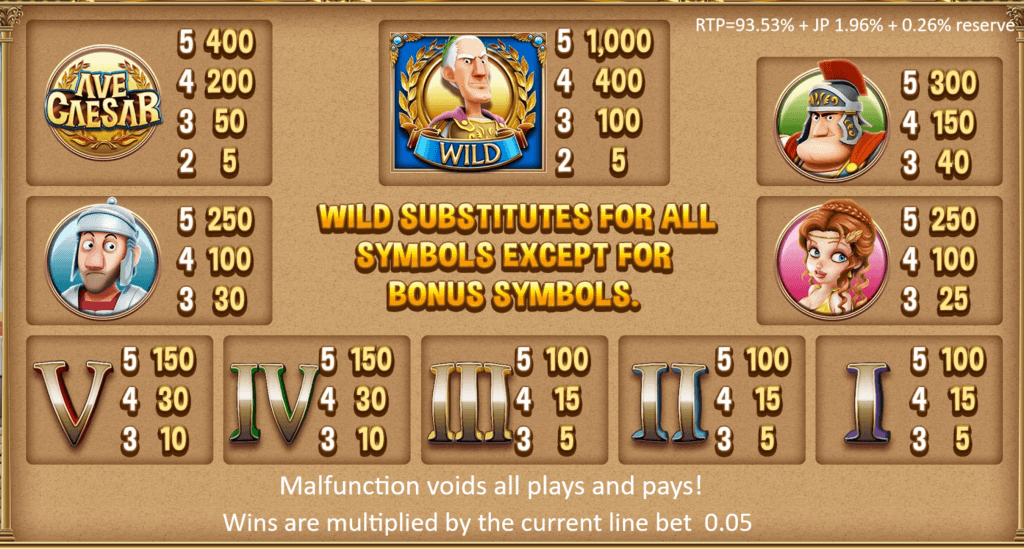 Ave Caesar slot from Leandar Games is packed full of features, each with a bit of story attached to them which I really like. The only thing is, it’s quite confusing to understand exactly what does what but fortunately most are triggered randomly so you don’t need to do anything. You also have the ability to win a progressive jackpot which is always nice, so all in all this is a great slot with lots going on and big wins available.