Battle Royal slot is a fun, new game from Play N Go that’s based on King Henry the 8th and his many wives. While the story itself is a very sad and tragic one, being a slot machine they’ve opted to go for a more light-hearted approach with some entertaining features. I think overall it works well, but I’ll go into the features in more detail down below.

The design of the slot works well for the theme. There’s a nice bit of detail overall and I like the idea behind the symbols. It’s quite a regal design with nice graphics which I think most people will appreciate. This is a 5×3 slot with 20 paylines with no option to extend this. Your goal is simple; to spin the reels to try and get a winning combination from left to right using the base symbols. These are listed as follows, ranked in ascending order based on their value: 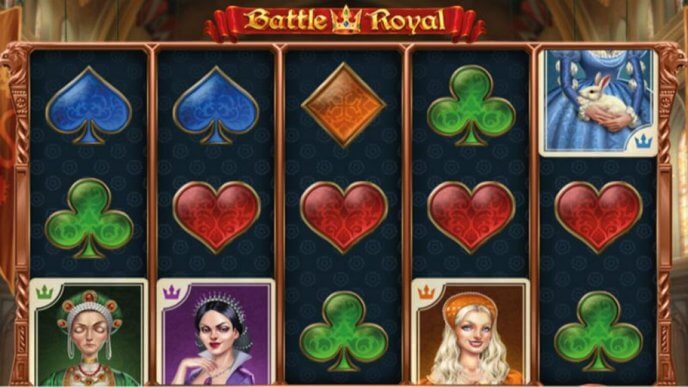 The above symbols in Battle Royal slot are used to pay out cash prizes when they landing on a winning payline. However, there are other symbols in the game that have different functions. For a start, there’s a Wild symbol shown by the King himself. This is the joint most valuable symbol in the game, but also substitutes for all other symbols in a winning combination. You also have a Scatter symbol shown as a crest. If it appears on the first and last reel then it will trigger a feature. You must choose one of the symbols to reveal one of the following features.

Free Spins Bonus – Heads Will Roll. As you can guess from the title, this feature will give you a number of free spins which will only stop until one of the wives is left on the reels. How do you get rid of the wives? That’s the fun part. After every spin, a guillotine will fall on a reel. If a Wife symbol is on that reel, she’ll lose her head and become Wild for the remainder of the Bonus. To make things more interesting, you get to choose which Wife you think will survive until the end. If you choose correctly, you’ll receive an additional prize and the chance to trigger the Long Live The King Feature.

Long Live The King. In this Bonus, you must help the King escape from his wives and collect as much treasure along the way as possible. You do this by choosing chests which have instant prizes inside. If you manage to find a key inside the chest, you can escape and earn a mystery multiplier for bigger rewards. You can also stay and try to win more loot, but if the ghost catches you the feature will end.

Royal Flush. This is just a very simple in-game feature whereby all suit symbols will be converted into the same symbol. This can happen at random during the base game. 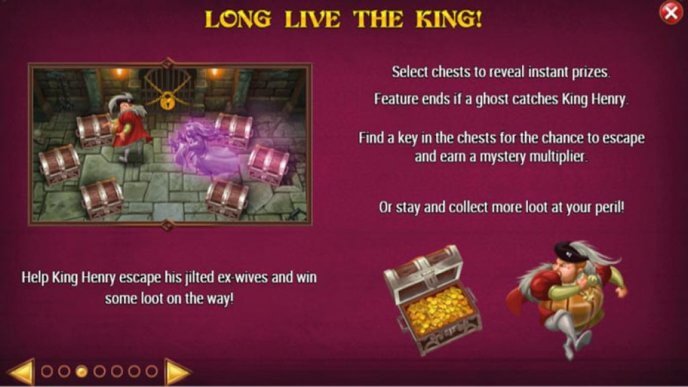 Battle Royal slot from Play N Go has a cool theme that’s more original than many these days, and the name is a great play on the popular game type Battle Royale. This is one of those slots that uses features not just to offer some additional rewards but to provide some entertainment as well, with Long Live The King providing a fun game that also lets you win some nice rewards. The Free Spins Bonus is an interesting one; they’re technically unlimited until you have only one Queen left but the way you get rid of them is pretty entertaining. You also get rewarded for making the right choice at the end which is a nice touch. Everything together, the theme and the gun gameplay that can offer up to 5,000x your bet makes for an entertaining and rewarding slot.