Battleship Direct Hit! is a new slot from SG Gaming that uses the Battleship franchise to come up with an exciting and action-packed game. We’ve seen a lot of slots fail though when under licensing from big brands, so how does this one fair?

Well in terms of the design, I think they’ve nailed it. You’re positioned at the front of a huge battleship with lots of controls and dials creating a realistic look. The graphics are good and the animations add to the effect so top marks here. You have a 6 reel setup here with up to 117,649 ways to win thanks to Megaways. Wins are of course awarded from left to right, and you must align the base symbols in the game in the right positions in order to win a prize. These base symbols are as follows, ranked in ascending order based on their value: 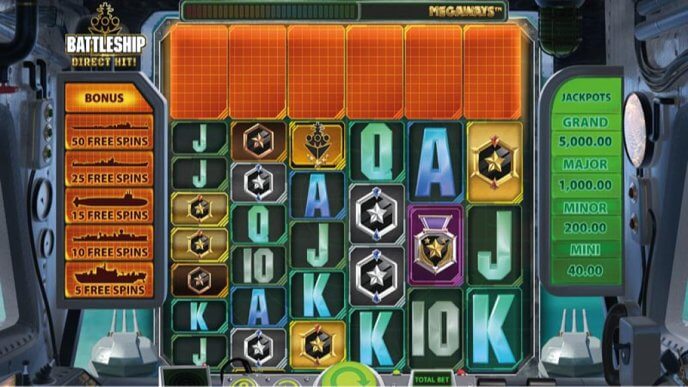 Cascading Wins. This is a feature we’ve seen in quite a few slots lately like Who Wants To Be A Millionaire slot. It goes by different names like cascading wins, the avalanche feature or reactions. It’s the same thing though. If you manage to get a winning combination, the symbols that formed that win will disappear and new tiles will fall in from above. If you get a new win with those symbols, they too will disappear and more will fall in and so on and so forth.

Turret Fire. This is a random feature which can be triggered after any base game spin. Turrets will fire onto the reels and destroy low paying symbols which will be replaced with higher value symbols with the cascade feature.

Missles. There’s a special missile symbol in the game which, when it lands, will launch missiles towards the targets at the top of the reels which can be used to destroy portions of a ship. If you manage to land a few of these symbols and destroy a whole ship, you’ll win free spins and jackpots, with the awards being reset and randomized for each spin. As with other symbols, the missile symbol will be destroyed and replaced with a new symbol falling from above. The Missile symbols are Scatter symbols.

Free Spins Bonus. As I mentioned earlier, if you manage to destroy a whole ship using the missiles you’ll be awarded a number of free spins. Depending on the ship, this could be either 5, 10, 15, 25 or even 50 free spins. Ships also have a Jackpot associated to them based on your current bet. These are:

You can see there’s a pretty big difference between the values of the ships. The more valuable ships take up more positions and are harder to get, naturally. You must destroy target ships during the Free Spins Bonus in order to win the Jackpots and you can also win another 5 free spins to help you get more wins. Wild symbols are also available during this Bonus (and not during the base game). These can land on reels 2, 3, 4 and 5 and will substitute for all other symbols in a winning combination apart from the Missile symbols. They too follow the mechanics of the cascading symbols. During the Free Spins Bonus, the total bet is the same as the spin that awarded the feature, of course. 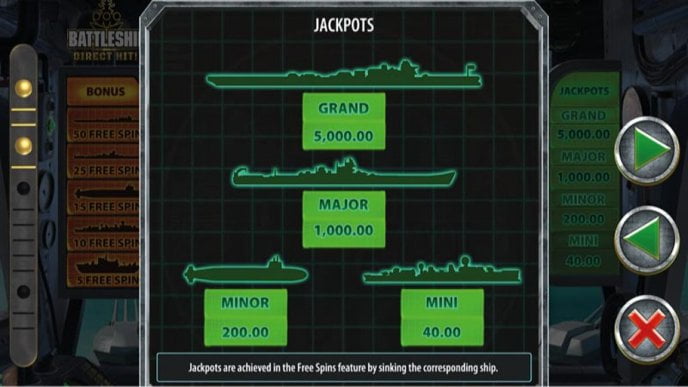 Battleship Direct Hit! slot has a lot going for it and I think SG Gaming have done a great job with the licensing for the franchise here. It looks very impressive with a lot of detail going on. They’ve included Megaways which is a popular offering for most players, but it’s the features that are most exciting. Having the ability to actually shoot down ships is what Battleships is all about and I think they’ve done it in an excellent way that’s a lot of fun too. There are also some nice rewards to be had from doing this with free spins and jackpots on offer. The in-game features are a nice addition too and the whole game comes across as a complete package that most people will enjoy. Be sure to give it a go and let us know what you think down in the comments below.