Big Bear slot is another ‘wild-themed’ slot using animals as symbols and a simple background set somewhere in the wilderness, likely in Canada or America. It’s not the most original theme, but it’s inoffensive at least so I don’t think too many of you will mind.

There are a few features on offer here as I’ll discuss shortly, but to get going with Big Bear slot you just need to spin the reels and hope to get a winning combination along one of the 243 ways to win. This is done using the base symbols which are as follows, ranked in ascending order based on their value:

All of the above symbols apart from the Scatter symbols provide only cash rewards and nothing else. The Scatter symbol, however, is not only the most valuable symbol by a big margin, but also used to trigger the Free Spins Bonus as I’ll discuss shortly. It’s shown as a drum with a large footprint on it. As well as this, there’s a Wild symbol shown as an angry grizzly bear. It only appears on reels 2 and 4 and will substitute for all other symbols in a winning combination apart from the Scatter symbol. Like with most of these symbols, it provides no value of its own. 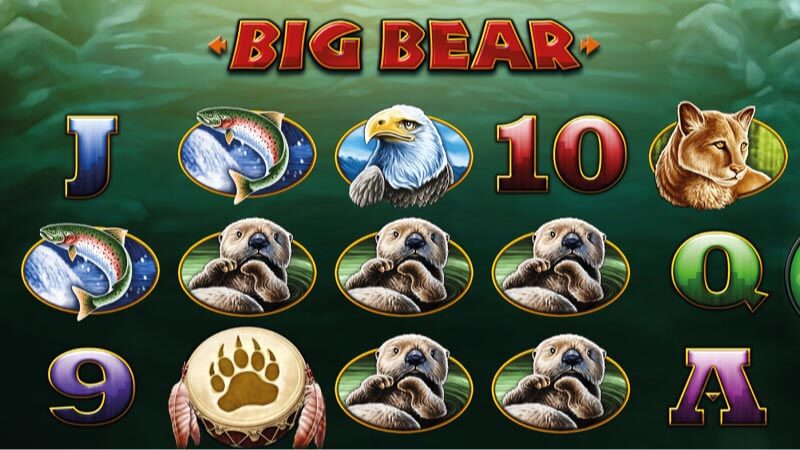 Free Games Feature. If you manage to land 3 Scatter symbols anywhere on the screen at the same time you’ll be awarded this feature. What makes this one special compared to most slots though is that you can decide how you’d like to play it. There are 3 features to choose from:

It’s worth noting that you can, in fact, trigger the Bonus again while it’s in play. If you thought that the multipliers from the Wilds were the only feature in this Bonus you’d be mistaken. Big Bear slot also offers you respins to help you get some extra wins. Whenever a Wild appears on the screen, regardless of whether it forms a win, the reel on which it appears is held in place and an extra spin of the other reels is given. Depending on which feature is selected, the value of a Wild on reels 2 or 4 is increased. This works as follows: 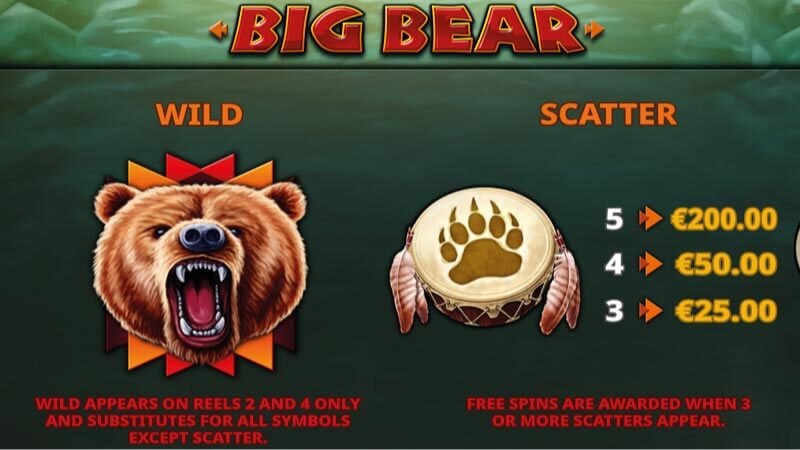 Big Bear slot from Playtech appears, on the surface, to be very basic and rather boring. The theme and design are very similar to other slots like Wild Country slot so it doesn’t really stand out. However, I am a big fan of being able to choose some of the features in a game. Here you can decide whether to have a large number of free spins with smaller multipliers, or less free spins with the potential for bigger wins. The respins as well make for an interesting feature, but I have to say that after a while it becomes a bit boring. In short, it’s an OK paying slot that’s only enjoyable for a short period of time so you may want to check elsewhere. Let us know what you think down in the comments section below.

Able To Choose Free Spins But Not Much Else