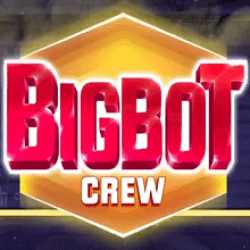 Bigbot Crew slot is the latest release from Quickspin and easily one of their most exciting offerings. There are some great ways to win big money here, but I’ll come onto the features in more detail shortly.

First, let’s talk about the theme. Right away you can see that this is a childish theme that looks an awful lot like the movie Big Hero 6. Now I have to say that the graphics are actually very impressive, and the layout of the slot as a whole is very clean and nice to look at. But this is quite a childish theme and I’m not too sure a lot of people will appreciate it. There’s even a story about how a group of ‘tech-heads’ build advanced technology and Bigbot is their latest creation whose job it is to help you unlock big prizes. I do really appreciate the effort here, but I wish the theme was slightly more age appropriate. That being said, with such great gameplay it’s easy to overlook this if the theme isn’t to your taste, and in order to get started you simply need to spin the reels in order to get a winning combination from left to right using the following base symbols which I’ve ranked in ascending order based on their value:

Above are the base symbols used to give you cash rewards, but there’s also the Bigbot Wild symbol, a 4×1 symbol that appears on reels 2, 3 and 4 only during the base game, and all reels during the Bigbot Respins and Free Spins. This symbol substitutes for all other symbols in the game apart from the Bonus Scatter symbol, and is also the most valuable symbol in the game in a winning combination of its own. During the base game and the Bigbot Respins, the symbol can nudge into place, and during the Free Spins the symbols are guaranteed to nudge into place. 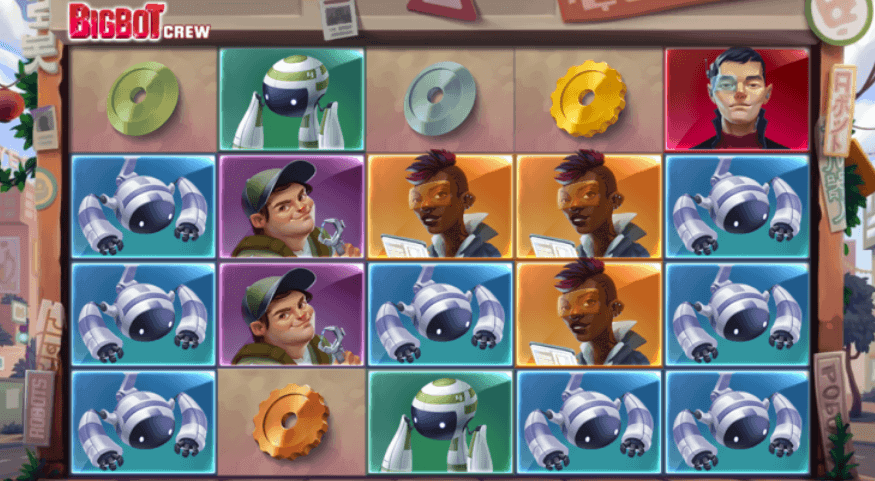 Bigbot Respins. If 2 or more Bigbot Wild symbols appear fully on the screen at any time, the Bigbot Respins feature is triggered. The number of respins awarded is equal to the number of Bigbot Wilds that are on the screen, and if an additional Wild appears during the respin to fill the reel, another respin will be granted. The Bigbot Wild symbols remain on the reels during the respins, so there’s potential here for some big wins. 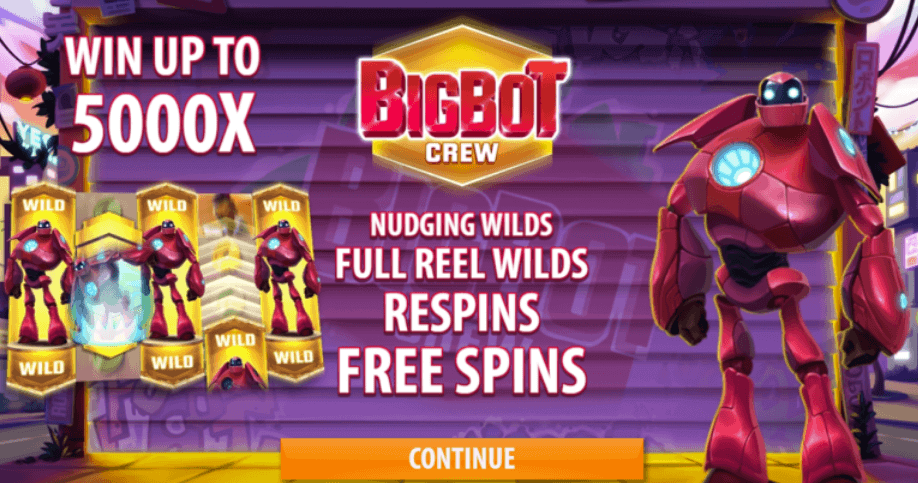 Bigbot Crew slot from Quickspin is quite possibly their best game to date, certainly their most rewarding. The bonus features on offer here are simple, but can be very effective. In particular, the free spins offer you the chance to win additional free spins and land numerous full reel Wild symbols throughout the feature, something that could prove to be very valuable. Don’t expect this all the time, but it’s great when it does happen.  The respins also take advantage of the full reel Wilds, and can prove to be very rewarding also. The theme of the game is something that’s a bit more questionable. On the one hand, the graphics are actually very impressive and I like the fact that there’s even a back story here, but it is fairly childish and some people won’t really appreciate it. However, with such great gameplay and big rewards on offer, it’s certainly not a good enough reason not to play Bigbot Crew slot, and I highly recommend you check it out.