We have to admit that when we hear the word ‘Bonanza slot’, it gives us imagery of an insane game show on television that is crazier than it should be. However, that’s nothing like what this online slot game from Big Time Gaming is about. Instead, it’s all about mining for gemstones, and when you find these, you’ll be having a bonanza kind of time! Fortunately, the developer has made sure to incorporate some very nice graphics into the Bonanza slot, ensuring that anyone who plays it has a truly entertaining time. It also incorporates a piece of soundtrack music every time you spin the reels, which seems to transport you to the country and western landscape. Placing your bets in this slot is quite easy to do too. You simply need to utilise the arrow buttons in the bottom-left corner of the screen. With these, you’re able to choose a wager amount between the minimum of 20p and upwards to a maximum of £20 per spin.

The layout of the Bonanza slot incorporates a total of six separate reels and four rows, which means that it is a little bit larger than a standard video slot. This makes for a greater surface area on which to play though. The pay lines that incorporate themselves into this game aren’t small either. Instead, it features a total of 117,649 megaways to win on each spin. Wins in the game are awarded on left to right adjacent symbols, regardless of their size. You see, speaking of the symbols, they can appear in various sizes throughout the game. The lower paying ones of these are present in the shape of the often-seen playing card icons, from 9 through to 10, J, Q, K and A. The remaining four higher paying symbols are of gemstones; a green emerald, blue sapphire, red ruby and transparent diamond.

Naturally, being a Big Time Gaming product, the Bonanza slot ensures that players get to have a truly enthralling experience, incorporating high-quality graphics to match the strength of its gameplay. 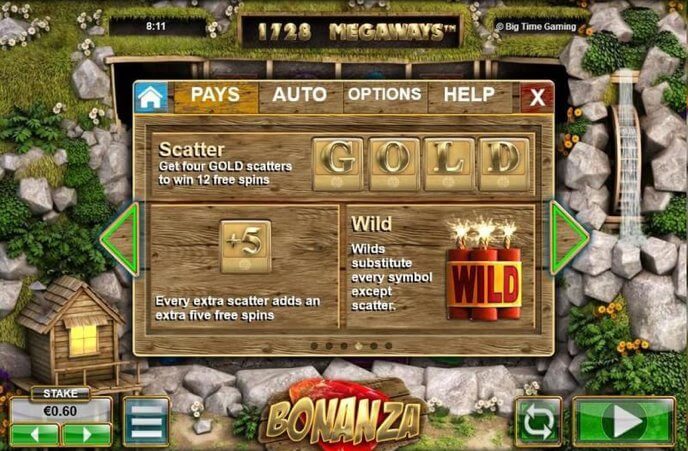 Not only is there a base game for you to play through, which has its own entertaining imagery running through it, but the Bonanza slot also incorporates a selection of bonus rounds too. These are available in the following additions:

Carts: On every spin, you’ll get to see a mine cart rush across the top of the reels. This will add an extra symbol to the top of reels two, three, four and five for you to benefit from. Therefore, you stand the chance with these, of creating larger win combinations.

Reactions: Every win that you form on the reels creates a reaction. This means that the symbols forming part of the win will explode and create a gap for new symbols to fall into. If another win forms, the same occurs again, and this continues repeating until no further wins can be formed from new symbols. 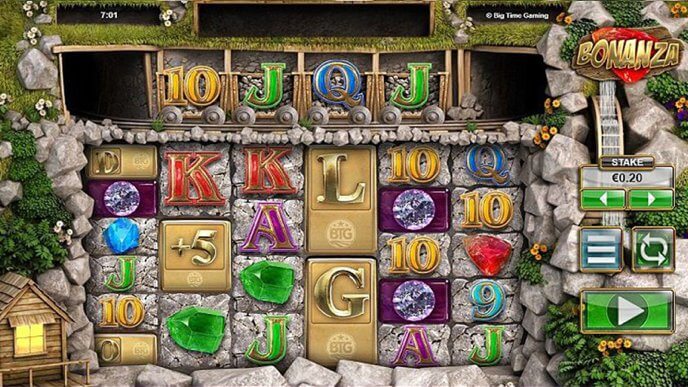 Scatter Free Spins: There are four scatter symbols in the game, which are formed by the letters G, O, L and D. If you spin one of each of these into view, then the game’s Free Spins round will trigger. This provides you with a total of 12 Free Spins to play through altogether. Every extra scatter that may appear as well as the standard four will add an extra five Free Spins on top of the original 12 for you.

Free Spins Unlimited Win Multiplier: During the slot’s Free Spins round, a win multiplier is present. This begins at times one and will increase after every reaction that takes place. This doesn’t have a maximum value to reach, so you can literally see it increase every time a win forms and it can dramatically increase your win balance.

Wild: The three sticks of dynamite exist in this slot game as its wild symbol. If this one appears on the reels anywhere, it will substitute for any other icon in order to create a winning combination. The only exceptions to this rule are the game’s scatter additions.