There are some online slot games that from the moment you see their title, you know exactly what theme they’re going to incorporate. The Book of Dead slot is one such game, bringing forth the Ancient Egyptian theme as its foundation. The full title of the game is Rich Wilde and the Book of Dead slot, with Rich being the intrepid explorer who is taking you into one of the ancient pyramids in search of artefacts, namely the Book of Dead. It’s quite a simple slot game on the whole, at least as far as gameplay is concerned, but it really incorporates the overall theme very well. Play’n Go tops this all off with some highly appealing graphics to enjoy. As far as placing wagers in the Book of Dead slot goes, you have the chance to choose a coin value between 1p and £1. Following on from this, you have the option of changing the amount of these coins that are in play per line between one and five. This means that the maximum bet option stands at £50 per spin.

The Book of Dead slot comes with a standard five reel and three row layout, meaning that everything should look quite familiar to regular slot players. Alongside this design, the game includes 10 separate pay lines for you to bet on. These lines are not something that you have the option of changing at all, so you’ll always be betting on 10. As far as the symbols that appear on the lines of the game go, you’ll find that these start with the often-seen playing card symbols of 10, J, Q, K and A. Then come three symbols depicting Ancient Egyptian items, such as the icon of Tutankhamen. Rich Wilde himself makes up the games last standard symbol. He is also the highest paying standard symbol of the Book of Dead slot, able to offer up to 5,000 times your overall wager as a pay-out.

Play’n Go is known for incorporating strong graphics into its games, and the same can be said of this slot game too. 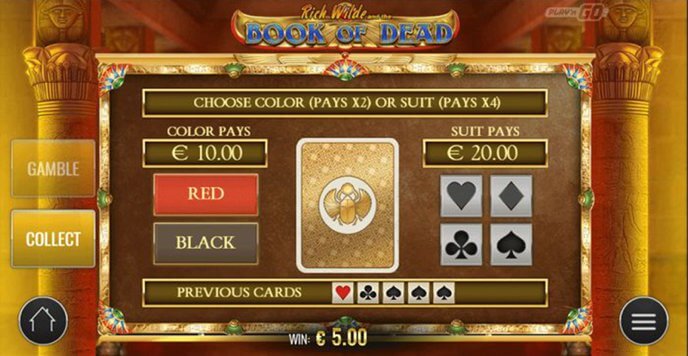 Rich Wilde may be taking you through an ancient pyramid as part of this slot’s base game, but the Book of Dead slot also has a couple of bonus features for you to enjoy at the same time. These are present in the form of the following additions:

Free Spins: There’s a scatter symbol in this slot game, which is the book that Rich is in search of, featuring the scarab beetle on its front. Whenever three of these show up in any location on the reels, you will activate the game’s Free Spins round. You will receive 10 of these Free Spins in total. One more thing to mention about the book scatter symbol is that it is also a wild icon that can substitute for any other standard symbol on the reels, helping to form winning combinations. The scatter symbol in itself will also provide a pay-out to you wherever it shows up on the reels.

Expanding Symbol: When the Free Spins round activates, a special expanding symbol will also be randomly chosen at the start. Whenever this one comes into view on a reel, it will expand to cover the entirety of it, giving you the chance to win more during this feature round. Expanding symbols can appear anywhere along an active line to provide a win. In actuality, with this particular feature also being in play, gamers of Book of Dead can win up to 250,000 coins altogether.

The Book of Dead slot is a highly volatile game, and as such the bonus rounds are often few and far between. This is a very popular game with casino streamers as the bonus has such a huge potential. For those that visit UK casinos, you may recognise this which is often on the casino floors, with stakes of up to £5 per play and a £10,000 jackpot.