Coins of Egypt slot is brought to you by Netnet, a company we have reviewed many times on this site and who so often bring us so unique and exciting new slots. Coins of Egypt slot is certainly a bit different in terms of how the features work, whereby you must collect coins to win rewards even during the free spins. I like the concept, but it remains to be seen just how valuable this type of feature is, but I’ll come onto it in more detail shortly.

One thing I do like is the design of the slot. We’ve certainly seen the theme of Egypt and the Gods many times before like with Tut’s Twister slot, but I have to admit Netent and designed the game very well and it looks impressive from the symbols to the reels and the backdrop. Speaking of the reels, you have a very standard 5×3 setup here with just 20 paylines and an RTP of 96.97%. I think I would have liked to have seen more paylines here but it’s not too bad. All you need to do to get started is to spin the reels to get a winning combination from left to right using the base symbols. These I’ve listed below, ranked in ascending order based on their value:

A Wild symbol is also part of the game, shown as a golden scarab symbol. This will substitute for all other symbols in the game apart from the Scatter, Chest Seal and Collect symbols. It’s also the highest value symbol, being twice as valuable as the God symbol in a combination of 5.

Pharaoh Coins Win Feature. You’ll notice during the base game that coins may sometimes appear on reels 1, 2 and 3, with only one coin showing on each reel at a time. These can have values of 2 to 15 appear on them also. When the coins show up, they’ll be collected and added to any wins from that round if a Collect symbol also appears on reel 5, shown as a tomb.

Free Spins Bonus. This is the main bonus of the game and fortunately has quite lot going for it as you’ll see. Like most games of this nature, it’s triggered by 3 Scatter symbols appearing on reels 1, 3 and 5 at the same time on any spin. All coins that are present on the reels will be added to each chest at the beginning of the bonus. During the free spins, if more coins appear on reels 1, 2 and 3 then their values will also be added to the chests. The chest symbol, of which there are 3, land on reel 5. These are the Ruby Eagle Seal, the Emerald Snake Seal and the Golden Cat Seal. In each spin, only 1 chest seal can be collected and added to its chest. Once 3 of the same chest seals have been collected from reel 5, the Free Spins Bonus is over and the number of coins collected in the corresponding chest will be awarded. 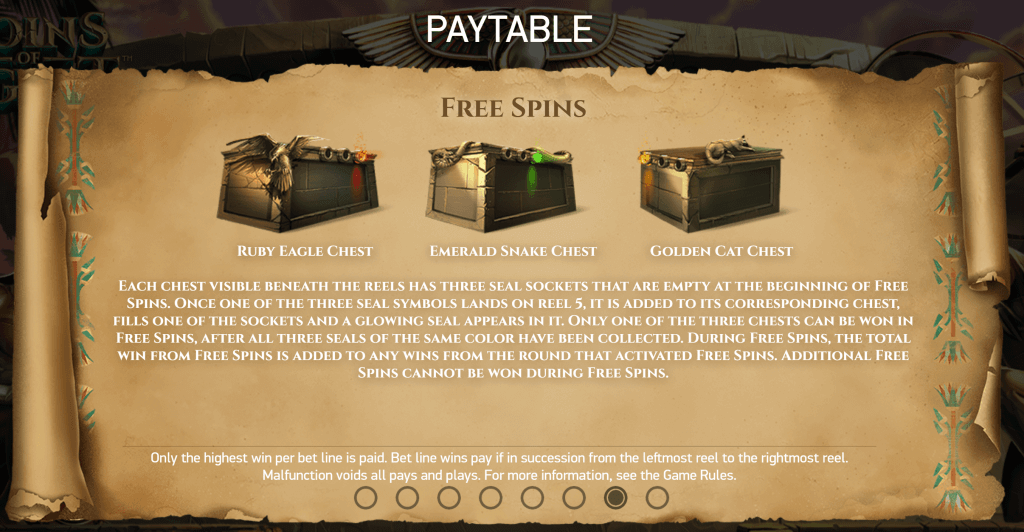 Coin of Egypt slot from Netent has a pretty unique playstyle which I think quite a lot of people will enjoy, but it takes a bit of getting used to. I’ll be honest, when I first read the rules of the game I was a bit confused about the coin aspect, but actually it’s pretty simple once you play the game for a little bit. What’s more, I actually found it quite rewarding too. I am, however, disappointed to have not seen another feature or two in Coins of Egypt slot, something like sticky Wilds or respins. I think this could have really helped make the game more engaging, and potentially offer better payouts. So, if you’re looking for something a bit different then, by all means, give this a go, but for those of you who care more about high-reward features this probably isn’t the slot for you.