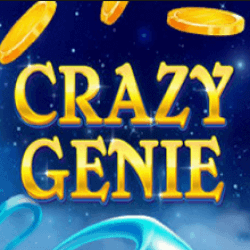 Crazy Genie slot is fun, mystical slot that has just been released from Red Tiger Gaming along with others including our recently reviewed Rocket Men slot. The theme here isn’t quite as original, we’ve seen quite a few slots take this theme but it’s proven to work and the developers have at least offered something a bit different in the design and the bonus features which I’ll move onto shortly. But in short, if you’re a fan of fun, simple and magical themes Crazy Genie slot could be for you.

Starting with the theme, we have a very clean design here with a simple background and nice colourful symbols that really stand out. It works very well and while it’s not as flashy as some other slots out there, I think it’s nice and refreshing and very pleasing on the eye. When it comes to the gameplay, we have a 5×3 layout with 20 pay lines. The minimum bet you can place is 20p, while the maximum bet goes up to a whopping £500, with an RTP of 95.22%. There are 5 bonus rounds as well which add some extra ways to make money but I’ll go into this in the next section. In order to play the game, you need to spin the reels and hope to get a winning combination using the base symbols from left to right to win money or a bonus. These base symbols are listed as follows, ranked in ascending order based on their value:

The Wild, as well as serving as the joint highest value symbol in the game, also substitutes for any other base symbol in a winning combination.

Crazy Genie. The Crazy Genie can appear at any point from the Golden Lamp and trigger all the features and bonuses.

Crazy Coins. The Crazy Genie will appear from his lamp and spin across the reels, releasing coins as he goes for a random instant prize win.

Wheel of Bonuses. When the 3 Bonus symbols land anywhere on reels 2, 3 and 4, the Wheel of bonuses will trigger. The Genie will spin it for you and it will land on one of 5 bonuses. The higher value bonuses take up smaller portions of the wheel so are less likely to come up.

Oasis Bonus. If the wheel lands on this bonus, you’ll get the opportunity to win up to 100x your original bet by hitting the pinata lamp, with the more hits giving you a bigger bonus.

Lamp Bonus. This will give you a chance to win up to 200x your original bet by rubbing the magic lamp in a way that works similarly to the Oasis Bonus.

Gift Bonus. This is one of the more valuable bonuses where you have to pick from the Golden Coins offered to you by the Crazy Genie which gives you multipliers that can be up to 1179x your original stake if you’re lucky!

Gold Bonus. This is another valuable bonus (potentially) where you’re offered a number of spins during which the Crazy Genie will throw gold coins into the reels which reveal different mystery prizes when they land. They may offer stake multipliers or extra spins, with up to 1068x your original stake available.

Treasure Bonus. You must select from a selection of the Crazy Genie’s treasures to win up to 258x your original stake, with each treasure offering a different multiplier. 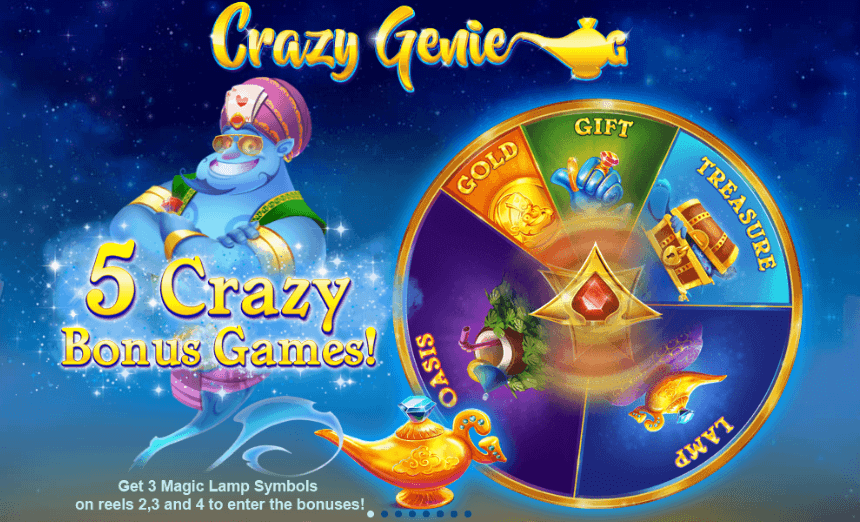 Overall, Crazy Genie slot by Red Tiger Gaming is very similar to Rocket Men slot in the way it plays and even the graphics and design. Obviously, the theme is very different but if you like this game style then both of these slots should appeal to you. What I like the most about it is how fun the game is, the bonuses have some great animations and are very engaging. And to top it all off, you can win some serious money with up to 1179x your stake up for grabs! There’s nothing really negative to say about this slot and I think with the Aladdin type theme it’s one most players will really enjoy, so why not head over to Ladbrokes casino now and give it a go.