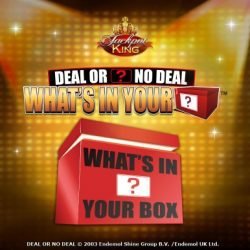 Deal or No Deal What’s In Your Box Slot

Deal or No Deal What’s In Your Box slot is one of the latest slots to be based on the hit TV series, Deal or No Deal. The format of the series actually originated in the Netherlands back in 2005, and became mainstream during the UK hosting of the showing by none other than Noel Edmonds. The premise is very simple; a contender takes the centre stages with a box that contains a value of somewhere between 1p and £250,000 but no-one knows what the value is. By eliminating other boxes, the contestant must decide on the value of their box and whether or not to take an offer from the banker. The show was a big success running for over eleven years until its cancellation in 2016 but has since made its way onto various gambling platforms, especially slots.

If you missed your opportunity appear on TV and make a potential small fortunate from the show, Deal or No Deal What’s In Your Box slot is exactly what you need. While you won’t be appearing on TV, with its 20 pay lines and 5 bonus features including progressives, you might end up with considerably more than some of the players on the show. The slot features a very standard 5×3 layout, with the basic aim of getting a winning combination using the base symbols from left to right which can award either cash or potentially a bonus which could offer even greater rewards. These base symbols are listed as follows, ranked in ascending order based on their value:

The Wild symbol, shown as a black telephone, also substitutes for all of the above symbols in a winning combination.

What’s In Your Box Bonus. This is the main bonus of the game which can award 5 different sub bonuses offering different rewards. The bonus is triggered by 3 or more scattered Bonus symbols, shown as a red Deal or No Deal box. The following sub-bonuses can be awarded from this:

Banker’s Bonus. At any point, the phone may ring with a call from the banker, presenting you with three different Deal or No Deal boxes from which you can choose one of the following rewards:

What’s more, you’ll have an opportunity to win a big progressive which is part of the Jackpot King network. 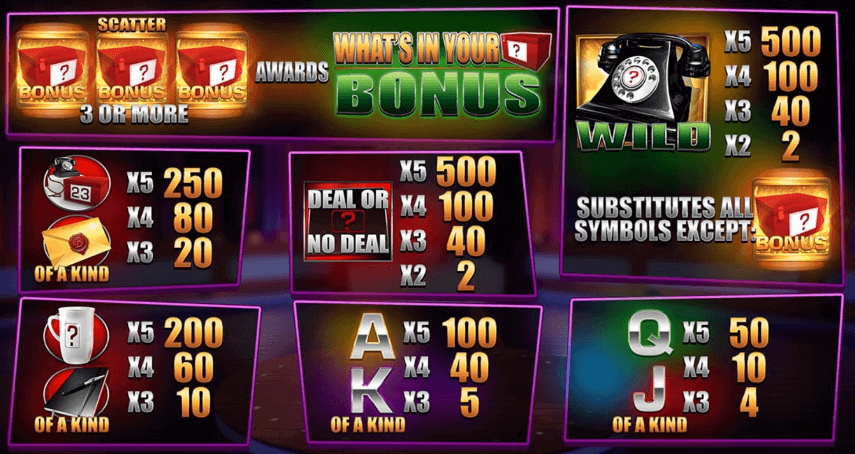 Overall, Deal or No Deal What’s In Your Box slot by Blueprint Gaming has a great range of features and a nice design with great graphics. There’s a lot to like about the game, and it stays true for the most part to the TV series especially with the Banker’s Bonus which I think is a really nice touch. You have the ability to win big through the progressives, and lots of other smaller features to keep the game interesting and provide smaller payouts to keep you going. With an RTP of just 92.6% plus the Jackpot King Promotional Pot we think they are being a bit stingy here, but it’s still sufficient for most players. Don’t forget to check out some of our Deal or No Deal fruit machine review like Deal or No Deal Beat the Clock for more mystery box fun.