Dungeon Quest slot is a more unusual type of game from Nolimitcity with a focus on providing you with lots of wild symbols and also upgrading your lower value symbols into their higher value counterparts. If you’re looking for a game that stands out from the crowd and offers something different, then I strongly suggest you keep reading to find out more.

First let’s talk about the design. It’s relatively simple in terms of how the game looks, with a group of adventurers somewhere down in a dungeon on some sort of quest, presumably. The colours are nice and the symbols, despite being quite basic, look really good so overall I’m impressed. What’s more striking about how Dungeon Quest slot looks though is the reel setup, with a 5×7 grid. With it comes 29 paylines which is obviously a more unusual number compared to the standard 20 or 40 or so. Luckily, all you need to do to play the game is just spin the reels to get a winning combination from left to right using the base symbols. These are listed as follows in ascending order based on their value: 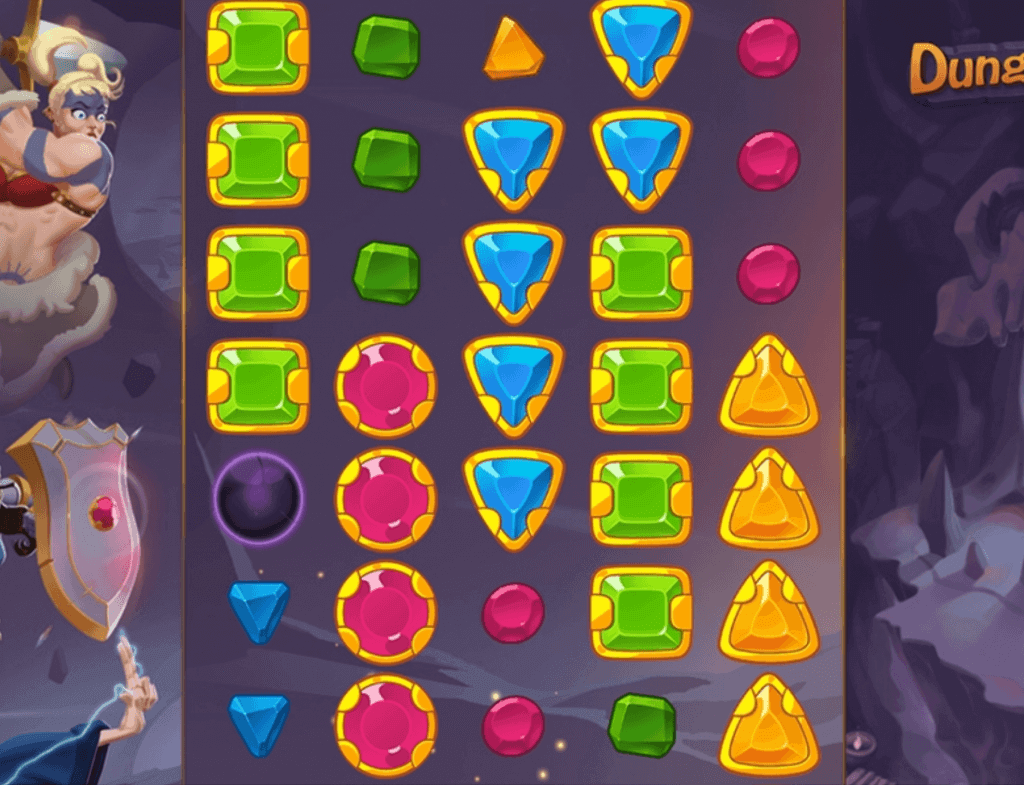 Power Stone. This is just a little in-game feature that can be triggered at any point during the base game. When it occurs, a random 2×2 area on the screen will suddenly turn into Wild symbols. As well as this, all occurrences of a randomly picked ore symbol will turn into Wild symbols also. Hopefully, this should give you a much better chance of getting a win.

Gem Force. This is another feature that can be triggered during the base game at random. A random ore symbol will be chosen and every other ore symbol in the game will turn into this symbol. Then, once the reels have stopped, the ore symbols will turn into the gem counterpart to hopefully give you some bigger wins.

Dungeon Quest slot from Nolimitcity is fairly unusual when compared to your average slot. For a start, there’s the reel setup which is actually a 5×7 grid compared to the industry standard 5×3 layout. Now I personally have no issues with this and I think it’s great that they’ve changed things up, although I have to say I would have liked to have seen more paylines than 29, which is also an unusual number in itself. Then there are the symbols which only comes in 2 sets of values. I do understand why they have done this as it works well with the features that are on offer here, but I think the Wild at least could have been of a higher value. And then finally there are the features which focus mainly on providing lots of Wild symbols or turning low-value symbols into high-value symbols. These work well I think, but I would have liked to have seen a bit more from the Free Spins Bonus which barely offers any free spins at all. In all though, I actually really enjoyed playing Dungeon Quest slot mainly because it’s refreshingly different and also offers quite a lot of payouts, although they are usually of fairly low value. Be sure to check this one out if you’re looking for something more unusual, and our other slots if you’re looking for something different.