Dwarf Mine slot is another game from Yggdrasil, this time with an underground miner theme. Although not entirely new, it’s still nice to see something a little different. It’s a fairly high variance game meaning that big wins tend to come few and far between, but are often quite impressive.

In terms of the games appearance, Dwarf Mine slot isn’t half bad. The graphics are quite nice and I like the symbols on the reels, but I think a bit more could have been done with the background. You have 5 reels in total with 4 rows, but as you’ll see, these can be expanded thanks for various features. There are up to 16,807 ways to win when this happens making things quite exciting. To get going, just start by spinning the reels and try to get a win from left to right using the base symbols. These are as follows, ranked in ascending order based on their value:

These are the base symbols available on your normal spins, but Dwarf Mine slot also has some super high paying symbols that are available only during the Collection Free Spins Bonus. These are as follows: 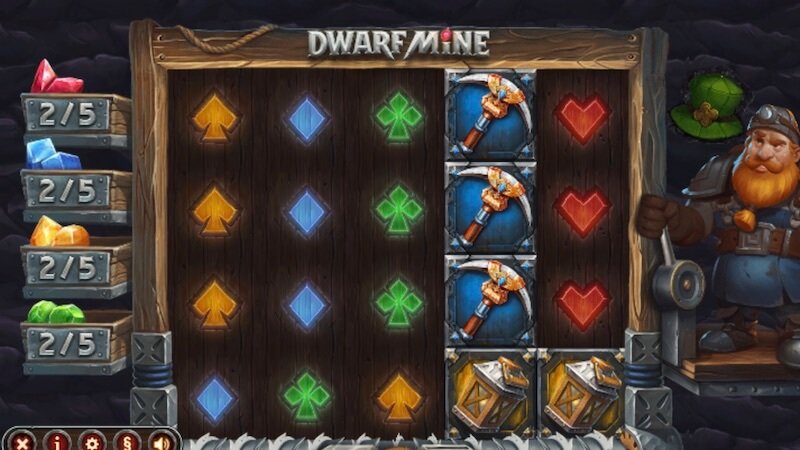 Dwarf Mine Slot Bonuses and Features

Expanding Reels. The Bonus symbol in the game, shown as a massive drill, serves many purposes as we’ll see. One such purpose is to expand the reels. Every Bonus symbol which lands on the reels will expand them by 1 row, and this can be done up to a maximum of 3 times. On the additional expanded reels you may find some of the collectible symbols. These come in the form of the green, yellow, blue and red gems mentioned earlier. When collecting these symbols, they’ll be added to the left hand side of the reels.

Free Spins Bonus. This is the main feature of the slot, as is often the case, and is certainly the most exciting. It’s triggered by landing 3 Bonus symbol which will then give you 10 free spins. As you have the 3 Bonus symbols originally, you’ll be playing the entire Bonus on the fully expanded 5×7 reels.

Collection Free Spins. Once you manage to collect 5 of every symbol, you’ll be given 5 collection free spins. These free spins are the profitable ones because they feature the super high paying symbols, as well as being played on the 5×7 set of reels. They’re played with the average coin value of all coin values used when you completed the collection. 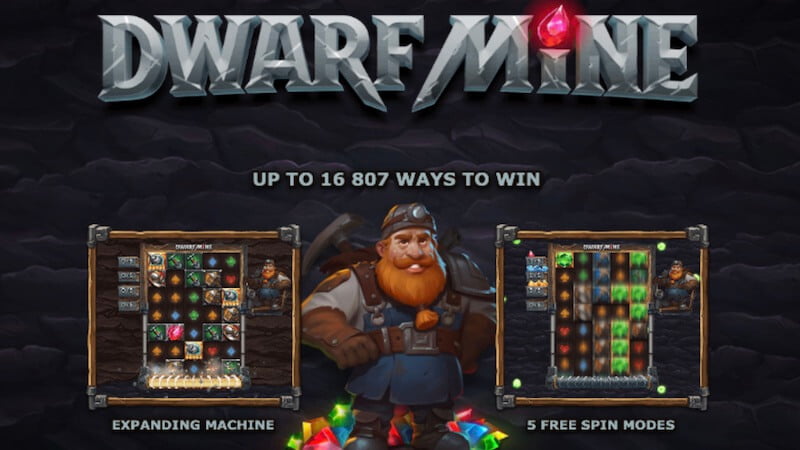 Dwarf Mine slot from Yggdrasil has some nice features and can pay pretty well, offering up to 4,000x your stake on a single spin. It’s pretty high variance, but not overly so. The mechanics involved here are pretty impressive. You need to expand the reels in order to collect the super high value symbols, and then use them with some free spins to get your big wins. Aside from that, you have some average free spins but that’s about it. It could be a bit more fun, probably with another feature or 2 during the base game, but it’s not that bad. I have to say, it’s certainly not one of my favourites from Yggdrasil but for many I think it’s still worth checking out. Let us know what you think down in the comments section below. You can also check out some of their other slots here.

A Good-looking Slot With Lots Of Ways To Win