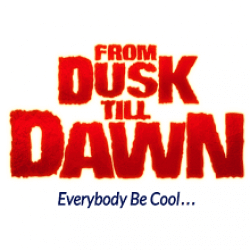 From Dusk Till Dawn Slot

From Dusk Till Dawn slot is one the latest slots brought to you from Novomatic. In case you’re not aware, this slot is based on the hit movie From Dusk Till Dawn back in 1996 starring George Clooney. The horror movie follows two criminals with a group of hostages who seek shelter in a truck stop. But unbeknownst to them, it’s full of vampires and all hell breaks loose. It’s not quite as scary as many vampire movies, there’s even a little bit of humour in there and I think this slot tries to look at it from a more light-hearted approach to appeal to a wider audience.

That being said, From Dusk Till Dawn slot certainly packs some action especially with its bonuses of which there are plenty, but I’ll go into more detail on those later. The design here isn’t quite as bright as many other slots we’ve seen like Hugo Goal slot, but it’s not trying to as remember this is based on a horror movie after all. The overall layout is clear and a little bit creepy and overall I think it works well. Moving on to the gameplay, this has a very standard 5×3 layout with 50 pay lines and your goal is to get a winning combination using the base symbols from left to right. These symbols are ranked in ascending order as follows:

There is also a Wild symbol which substitutes for all symbols in a winning combination apart from the Scatter symbols, and other symbols which are part of bonuses which I’ll discuss shortly.

From Dusk Till Dawn Slot Bonuses and Features

On The Run Bonus. After any base spin, a getaway car may race across the screen and turn various symbols into Wilds for some extra wins.

Everybody Be Cool Bonus. Also during the base gameplay, the characters apart from Seth Gecko may turn into Seth Gecko, the highest value symbol.

Cash Explosion Bonus. If a base game win equals or is greater than the total bet, a cash explosion could multiply the win from 5x up to 25x, with progressive jackpots excluded from the multiplication.

Bonus Twister Wheel. This is triggered by at least 3 scattered Bonus symbols, giving you a chance to win some cash prizes or special bonus rounds. If you win a cash prize, you will be awarded the value shown as well as increase all the prize segments for the next spin apart from the final spin. If you land on Pick A Bonus, you can choose between 10 free games of the Dancing Wild Bonus or The Mugshot Bonus, ending the Bonus Twister Wheel.

Dancing Bonus. The Dancing Wild bonus uses a different set of symbols including a Wild symbol which, with each spin, may change its size and position to cover between 2 and 12 symbols on reels 2, 3 and 4. Additionally, as part of the Xtra Stack Feature in this bonus, reels 1 and 5 can turn into bursts of fire with every position on all reels showing the same symbol which is chosen at random.

Mugshot Bonus. You’re initially given 3 free games and presented with a different set of reels. Every time Richie or Seth stops you are awarded a prize and the symbol will remain in position for the remaining free games, resetting the number to 3. If a change symbol stops, all the held Richie symbols turn into Seth symbols. Finally, a Level Up symbol will increase the prize level for the bonus, possible up to a maximum of 4 times. The bonus ends after all free spins have been used up or a Full Screen is achieved, whereby you will be awarded an additional 5,000x bet per line.

Jackpots. There are two Jackpots in this game, The higher value Dawn and the lower value Dusk. They are originally set at £200 and £5, respectively, resetting to this values once won.

That just about covers From Dusk Till Dawn slot, and you can see there’s quite a lot going on. I think Novomatic have done a good job in turning a great movie into a way to make some money while keeping a lot of the good aspects of the film intact. There are plenty of bonuses with various rewards to keep things interesting, also giving you a chance at making some big money. The design is clear and a bit eerie, but not so much so as to deter people who aren’t a fan of horror movies. Overall then, From Dusk Till Dawn slot gets a solid recommendation from me.