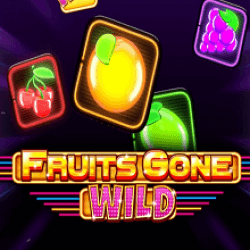 Fruits Gone Wild slot is brought to you by Stake Logic. You might not have heard of them as they certainly haven’t produced as many slots as some of the bigger names out there like SG Gaming and Barcrest but in a way that’s a good thing as it means they have more creative freedom to do something a bit different and really stand out from the crowd. That’s exactly what they’ve done here and just like what we saw in Devils slot, not just with the design but with the gameplay also.

Let’s start with the design actually as it’s pretty cool. This is a very retro theme with bright neon colours and a cool backdrop that gives the impression you’re moving down a portal or something. The graphics here are overall pretty good sort if in a Pacman type way, but some may prefer the looks of more modern slots with realistic graphics. If we move on to the gameplay, we have here a standard 5×3 layout with 20 pay lines. Unlike Devils slot, these only pay from left to right but we do have twice as many. Personally I would have liked to see pay lines in both directions here too just because it’s not something we see all that often and helps a game stand out, especially from a smaller company such as Stake Logic. Moving on though, the basic aim of the game is to get a winning combination using the base symbols to win either cash rewards or a bonus as I’ll discuss below. These base symbols are listed as follows, ranked in ascending order based on their value:

The Wild symbols also serves as any other base symbol when part of a winning combination. On every spin, you can have between 0 and 3 Wild symbols appear at random positions on the reels and lock into place. Additionally, they can randomly expand and transform in 2×2 Wild symbols for potentially bigger and better payouts. 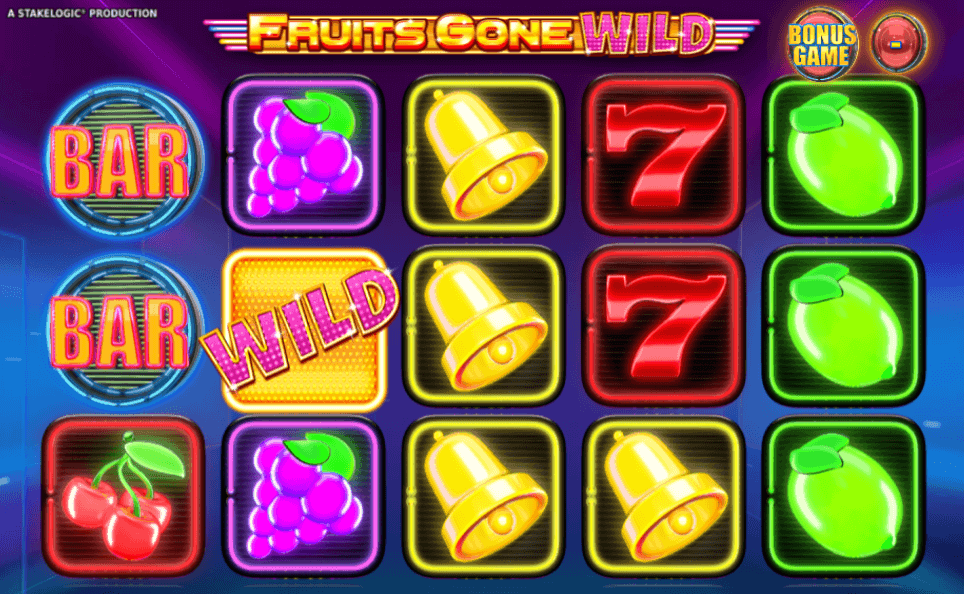 Free Spins Bin. All extra Free Spins collected during the Free Spins Bonus Feature are added to this bin where they will be played in addition to the regular Free Spins. It’s possible to collect up to 20 Free Spins in the bin.

That’s all there really is to Fruits Gone Wild slot and I have to say that it’s a little disappointing. While I appreciate that Stake Logic is a small company with admittedly smaller resources than many of its competitors, I think they could have added more to the gameplay even with some simple bonuses. They don’t have to get all fancy with big animations and things like that, in fact the design is great and doing so would probably detract from the brilliant retro theme. But just something to spice things up a bit, add an additional way to make some money and make the game more engaging would be nice. I have to say that I think Devils slot is a better game overall and will probably appeal to more players, but if you want a nice simple game to play for a few sessions you might still enjoy Fruits Gone Wild slot.