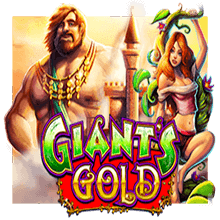 The Giants Gold slot machine is a variation on the Jack and the Beanstalk theme, released by Williams Interactive in 2013, and it’s quite different than all the other slots as it features a normal reel and a colossal reel, with a total of 10 reels and a total of 80 symbols in each spin. There is only one bonus feature, and that one can give you up to 100 free spins with a 2x multiplier.

The Giants Gold slot machine offers you a chance to bet on 20, 40, 60, 80 or all 100 paylines. Bet per two lines can range from £0.01 to £2, which means the minimum bet to cover all lines is £0.50 and the maximum possible bet is £100.
The slot has the usual five reels with four symbols on each on the left part of the screen, and on the right part you’ll find five more reels with twelve symbols on each reel, very similar to Spartacus Gladiator of Rome! All of the reels will spin every time you click ‘Spin’, so with each spin you’ll get 80 new symbols. Symbols are stacked in the Giants Gold slot machine, and when the Wild symbol covers the entire normal reel, it will transfer to the respective colossal reel. Wild symbol only appears on reels 1, 3 and 5. 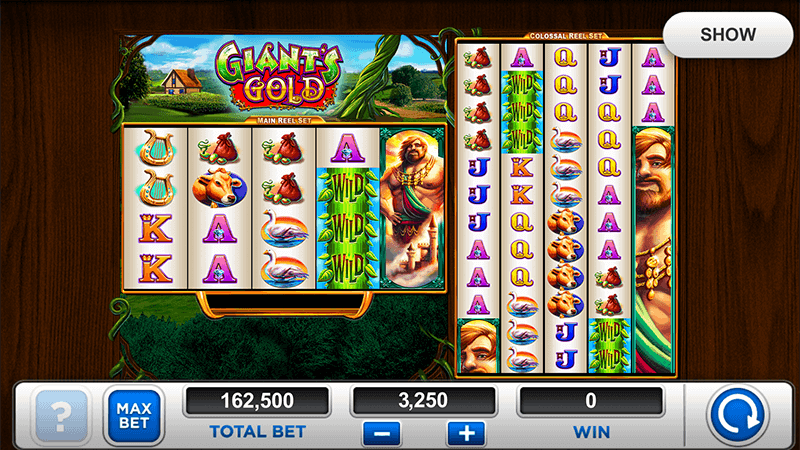 When you land 40 or more Feature Scatter symbols, you’ll get 100 free spins, and during these the colossal reel will pay with a 2x multiplier, so effectively you get the equivalent of 200 normal spins. This is probably among the bigger number of free spins in slot games overall, and is a prize definitely worth the wait. Even when you land only three Scatter symbols across three reels, you’ll still trigger the free spins game, but not with that many spins.
There are two main symbols in the Giants Gold slot machine which are stacked and which can fill either the entire normal reel, or the entire colossal reel, and there are eight other symbols, all of which give similar pays. The relation between the best-paying and worst-paying symbol of these eight is only 3 to 1, so we could say they’re roughly all worth the same. The Wild symbol is the highest-paying symbol.

Theoretical return to player (RTP) of Giants Gold is 96.21%, which is a decent level, and you won’t have to worry about this slot game eating up your money quickly. It does pay often enough to keep you in positive, and of course, the thing you’ll be waiting for are those 100 free spins. You might have to wait for a while, but while you’re waiting you’ll be having fun with those stacked reels and transferable Wilds. The Giants Gold slot machine is a good and innovative slot game, and will be enjoyed the most by fans of stacked symbols, while other player will need to get used to Giants Gold before starting to enjoy it.