We all expect kings to be flush with gold, so the theme of the Gold King slot from Play’n Go is quite on point. It brings forth such a regal and majestic setup of golden trinkets, jewels and ingots that you’ll think that you’re a member of the royal family once you play it. However, these items all belong to the king of the land, and he’s not about to give any of it up easily. You’ll have to spin the reels of the Gold King slot to try and claim some of it as your own. Gold King features some great imagery throughout, thanks to the high-quality graphics of Play’n Go. What’s more, you’ve got easy access to adjusting your wager in the slot. All that you need to do is utilise the options at the bottom of the reels. There, you’re able to choose from bets between the minimum of 20p and upwards to the maximum amount of £100.

Of course, it’s not only the wagering possibilities and theme of the game that are inviting. The Gold King slot also incorporates a fairly standard video slot layout of five reels and three rows. Therefore, it all plays out in quite a regular way. Alongside this setup, there’s a total of 20 different pay lines in action all the time. This is because this particular part of the slot is not customisable. However, you are able to form wins by bringing three or more of the same symbol into view on one or more of these pay lines. Speaking of the symbols, these begin with regal incarnations of the often-seen playing card symbols; 10, J, Q, K and A. Following on from these, the higher-paying standard symbols are available in the form of the gold ingots, gem-studded pendant and the king’s golden crown. There’s also a golden rose symbol, which works as the slot’s wild symbol, providing a substitute for all other icons, except for the scatter addition.

Naturally, whenever Play’n Go creates a slot game, it utilises the best quality of graphics. The Gold King slot is also able to provide you with such to enjoy. 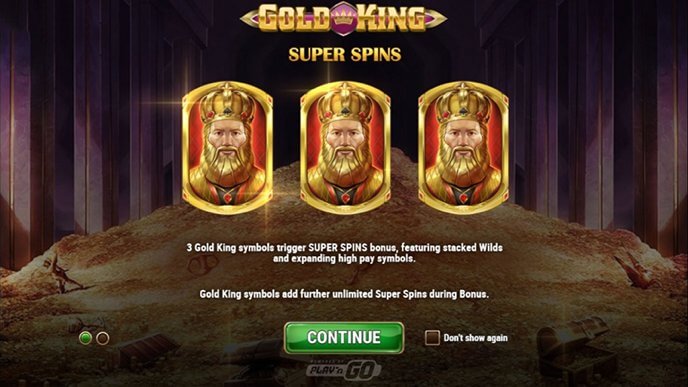 The base game is just one part of this slot game though, because it also includes a selection of special feature rounds for you to enjoy too. These are present in the slot in the following additions:

Super Stacks: During the base game, in every single spin, a standard symbol is chosen. This will then fill 12 consecutive spaces on each of the reels, similar to Golden Goddess. This gives you stronger chances of forming winning combinations.

Extra perks of the Super Spins round include the fact that the wild symbol will appear in stacks of six or seven on each of the reels. The three higher-paying standard symbols will expand during the Super Spins round, filling all three spaces on any reel that they land on. Meanwhile, the five lower-paying standard playing card icons appear in stacks of eight for this round. 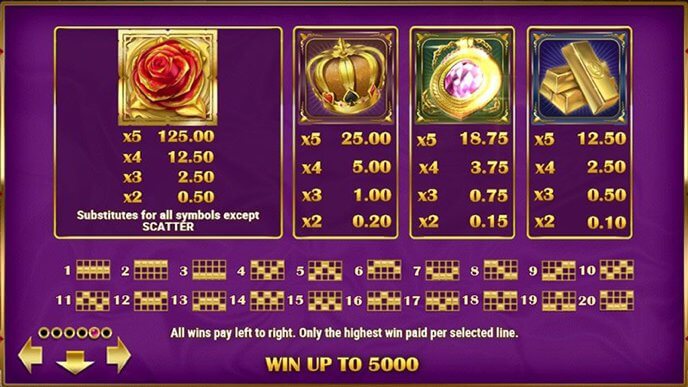 Golden Spin: During any spin in the main game, the Golden Spin feature may come into play. This sees reels one, three and five completely fill with Super Stacks, providing extra opportunities for you to win big!