Golden Grimoire slot is a visually appealing, new slot from Netent that takes a common theme of magic and uses it to create some fun features with a nice design. The graphics are very good here, with a stunning backdrop set in some type of magical castle, and a set of reels with no border. There are 5 reels in total with just 3 rows, offering a total of 40 paylines. What you need to do is get a winning combination from left to right using the base symbols. These are as follows, ranked in ascending order as follows:

These symbols will pay you a cash reward when you get a win in the right combination. However, there are 4 additional symbols in Golden Grimoire slot that you’ll want to be aware of. 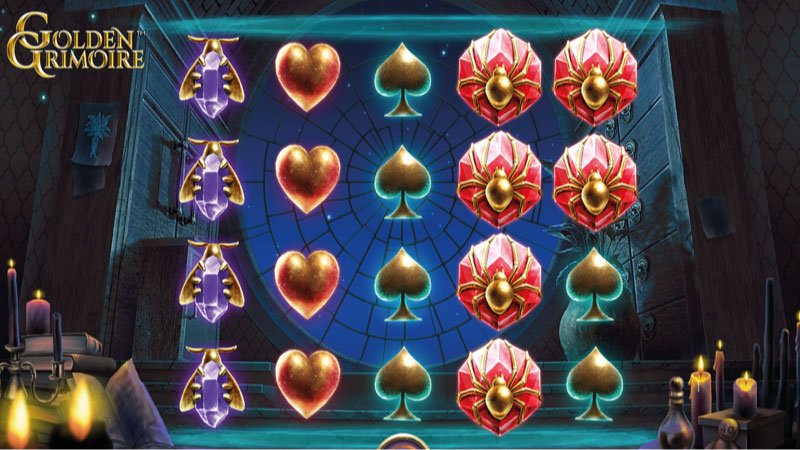 Wild Symbol. The Wild symbol is pretty unique one because it only appears as a result of the Mystery symbol transformation. It’s shown as a golden skull and will substitute for all other symbols in a winning combination apart from the Scatter and Mystery symbol.

Free Spins Bonus. As you’d probably expect, this is triggered by 3 Scatter symbols which appear only on reels 1, 3 and 5. When this happens, you’ll be given 8 free spins. Note that they only appear during the base game. The special thing about this Bonus is that you have sticky mystery symbols in play. These are available only on reels 2, 3, 4 and 5. They work in exactly the same way as the non-sticky versions, turning into the same symbols and potentially transforming other symbols between them and the leftmost reel into that same symbol. However, once they land on a reels, they stay in place until the end of the Bonus. They transform into different symbols with every spin. 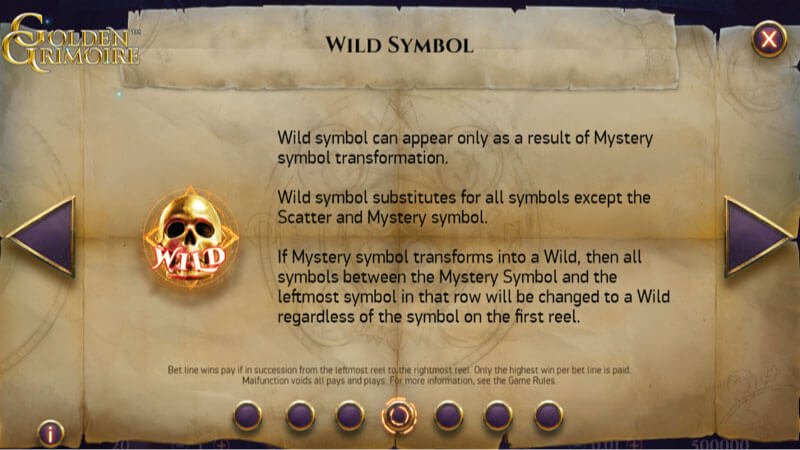 Golden Grimoire slot from Netent has a magical feel to it and this extends to the design. I really like the backdrop, but I do feel like the symbols could be improved. There are really only 2 features in this game. The first is the Mystery symbol which extends beyond what most other slots use it for, being able to transform additional symbols up to the left reel for extra wins, hopefully. The second is the Free Spins Bonus, which doesn’t offer much aside from the fact that the Mystery symbols become sticky. This is a nice idea, but I really would have liked to have seen potential for some bigger wins. I appreciate that this is a low variance slot, but a maximum potential of 200x your stake on a single spin is quite low. It’s not quite for me, although I understand that some people may enjoy this type of game. Be sure to let us know what you think down in the comments section below. You can also check out other Netent slots here.

Looks Great But Could Pay Better