The Golden Legend slot is a Play’n GO slot machine released in April 2015 with a commonly seen Chinese / golden theme, in which you can win up to 100,000 coins per game. It’s one of those slots where you spin the reels in hope of triggering the highly rewarding free spins bonus round, and the theoretical payout makes the Golden Legend slot a quality game even if it isn’t visually impressive as some other similar titles.

The Golden Legend slot game has five reels with four symbols on each, with 50 paylines. Player can choose how many lines they wishe to bet on, from 1 to 50, and the minimum bet per line is 00.01. That means the Golden Legend slot machine is a penny slot as it can be played for 00.01, and the minimum bet that covers all paylines is 00.50. The maximum bet per spin is 100 coins in your playing currency. This range allows all players to play the game, from penny slot players to high rollers, it also allows for use of different staking strategies should you choose to try any.

The total number of symbols in the Golden Legend slot is 13, which is higher than average and is possibly a bit much, that includes the Wild and the Scatter symbols. Five symbols are high-paying ones and all are represented by golden animal statues; Tiger, Lion, Turtle, Swan and Fish. Six low-paying symbols are the usual A, K, Q, J, 10 and 9, and they feel like they don’t belong in this theme. When it comes to graphics, the Golden Legend slot under performs, even if the golden animal symbols are beautifully drawn. Not good enough for a 2015 slot machine and not good enough by Play’n GO standards either. 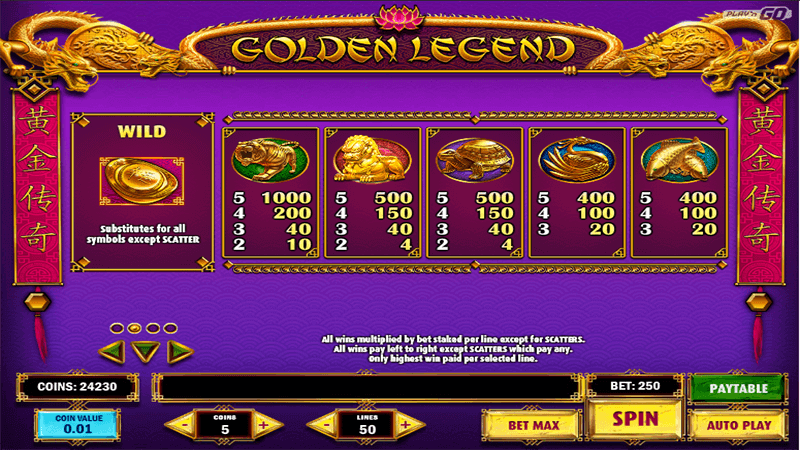 And now the most important part of such a slot, the theoretical return to player (RTP) which makes or breaks a game. The Golden Legend slot has an RTP of 96.50%, which is more than good enough, and it almost brings this game into the high-paying slots bracket. Players who enjoy golden-themed slots with ancient Chinese symbols should play Golden Legend, it’s among the better slots of the genre since it has such a high RTP and such a rewarding free spins game. The game is meant to be played in longer playing sessions as it has medium to high variance.