Anyone who plays slot machine regularly will instantly recognise certain slot symbols as been more rewarding than others. The Golden Sevens slot machine takes the most popular reel symbol and stacks it high, so a full screen can come into view for some super massive wins. Not only do the reel symbols look fantastic, and very eye-catching, there is also a progressive jackpot to be won on any stake.
The Golden Sevens slot machine is very similar to Fruits n Sevens, both of which use five reels and various stakes. You can play Golden Sevens from only 40p, up to £10 per spin, with reel symbols paying from left to right. A lot of the reel wins come from clusters as many of the symbols are stacked, so expect a lot of full and nearly full screens. Not quite as valuable as a full screen of Rainbow Riches, but highly profitable all the same. 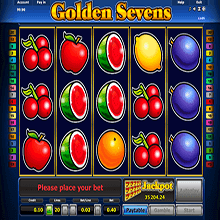 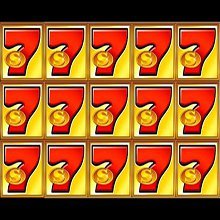 Even without the progressive jackpot, the Golden Sevens slot machine is highly enjoyable and often profitable due to the clusters of symbols that roll into view. Each win can also be gambled on a double or nothing type bet. Most people don’t like these type of bets, but they are good sometimes and are always true odds.