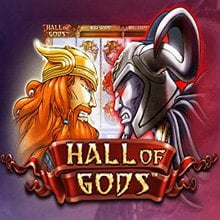 Hall of Gods is a NetEnt classic slot game released in 2012, featuring the Hall of God progressive jackpot and themed around Nordic mythology, with Freya, Odin, Loki, Thor and Idun as the main characters. The slot machine features a free spins game and a bonus game, as well as three jackpots, including the huge Hall of Gods progressive jackpot.
Bets can range from £0.20 to £50, and there are 20 fixed paylines. The reason why the maximum bet is only £50 is that the larger the bet, the better the chance of winning the Jackpot, so it wouldn’t have been fair to force players to bet £400 or the like. With £50 per spin you already have the biggest chance to win the Hall of Gods progressive jackpot.

Graphics could be a bit better, as all the symbols are alike and aren’t easily distinguishable from one another as the grey color is dominant. The wide spacing between the symbols further reduces the player’s ability to instantly know what you got on the reels. However, all the artwork is nicely done, though a bit cartoonish compared to the other slots with the Nordic mythology theme. 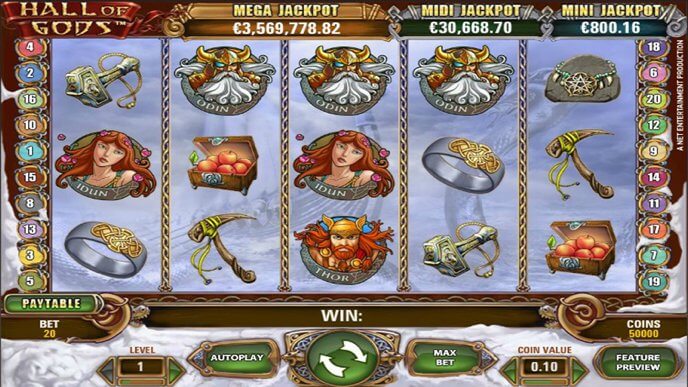 On the Hall of Gods progressive jackpot slot Dragon is the Wild symbol and it substitutes for all symbols except for Scatter, it also expands when it lands on reels two, three or four to cover the entire reel when completing winning betting lines. This means you’ll get some additional wins very often, and you do need every bit of help you can get as Hall of Gods doesn’t produce wins too often.
Black Ravens is the Scatter symbol, and when you land three, four or five of them on the reels, you’ll get 10, 15 or 20 free spins, respectively. If you land three or more Scatters during the free spins, you’ll activate additional free spins. During the free spins, all wins are multiplied by 3x.
Hammer is the Bonus symbol, and when you land three of them you’ll get a chance to win one of three Hall of Gods progressive jackpots. The chance to win a Jackpot correlates positively with the Jackpot size and your bet size, so the more you bet, the bigger the chance of winning. There’s the Mini Jackpot which is really tiny, the Midi Jackpot which is decent and you’ll walk away with a nice profit, and the Mega Jackpot which can be more than 2 million pounds, and was recently won (at time of writing) at a little over 6.5 million! This is definitely the reason to play this NetEnt slot. The Midi and Mini jackpots are casino based, so each casino that hosts the game will have a different value, the Mega jackpot is linked, this allows it to reach into the multi-million pound range.

The Hall of Gods progressive jackpot slot doesn’t pay too often. The vast majority of the time, the reels won’t produce a win, and it’s a matter of being patient and having a large enough bankroll to wait for those free spins and hopefully, the bonus game where you’ll have the chance to win one of the jackpots, though most of the time you’ll just get a coin prize. Hall of Gods is a quality slot machine with a progressive jackpot. Theoretical return to player is 95.5%, which is a bit low, but this is usual for progressive jackpot slots. If it was any higher, the jackpot wouldn’t grow to be that impressive.