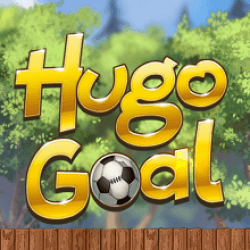 Hugo Goal slot is an excellent way to get in the mood for the upcoming World Cup. It features Play N Go’s very own Hugo, their somewhat ugly but friendly looking troll who’s looking to have some fun and hopefully make you some good money. With the World Cup just around the corner starting on the 14th of June, Play N Go have released this game in perfect timing, although it has to be said that this particular slot is set in a much smaller stadium, or rather a field, and takes a much more light-hearted approach so as to appeal to both fans and those who aren’t necessarily that interested in football.

The gameplay here is also relatively straight-forward, with a simple 3×3 layout and some clear symbols which tie in nicely with the theme (I’ll come onto this shortly). Speaking of the design of Hugo Goal slot, Play N Go have created some spectacular graphics with vibrant colours and an overall very attractive design that’s sure to stand out. I have to say I’m not a huge fan of the sound this game produces, with a rather annoying (at least to me anyway) tune constantly playing in the background but some good sound effects when you spin and get the bonuses. To play the slot is simple, with the idea being to get a winning combination using the base symbols of the game from left to right. These symbols are listed as follows, ranked in ascending order based on their value:

You can see that there are quite a large number of symbols here all with different values. Hugo also serves as a wild meaning he substitutes for all symbols in a winning combination.

Free Kick. Also on non-winning spins, if there is a combination of two fully stacked reels the feature an item symbol then the remaining reel will spin again, but only once, giving you another chance to win. Obviously this isn’t as valuable as the Action Replay bonus as the symbols are worth less and only one respin is awarded.

Penalty Shoot-out. This gives you a chance to multiply your winnings by up to 10x if all the reels are filled with the same symbol, whether it’s a character or an item. This is a fun bonus that gets you to interact with the game but attempting to save 5 penalty kicks while playing as Hugo the goalkeeper. The multiplier will increase by 1x for every goal you save, and saving all 5 goals will give you a 10x multiplier. Couple this with a potentially high value symbol that triggered the bonus and you could see yourself winning 800x your original bet (Hugo offers 80x your bet if you land 3 of him across a payline). 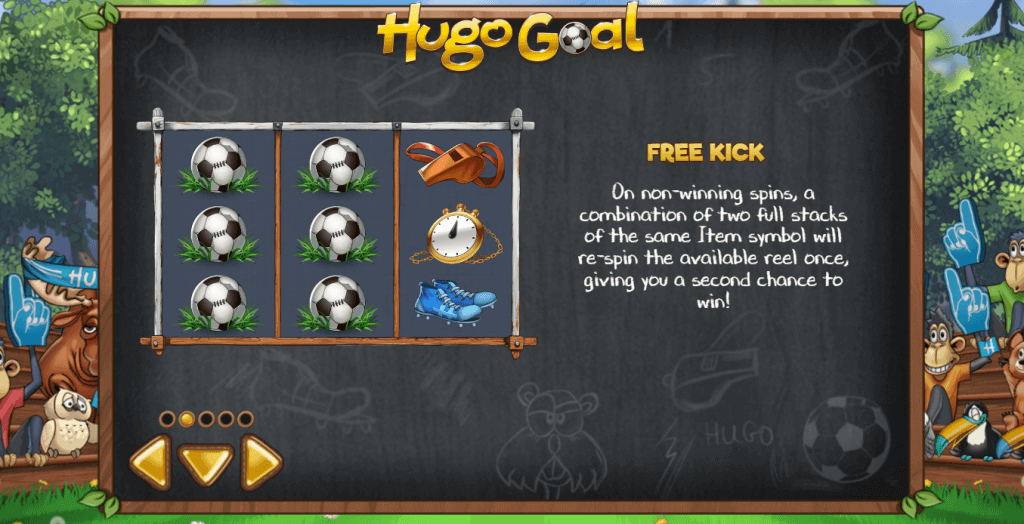 Overall then, Hugo Goal slot is another addition to the Hugo based theme which is actually quite fun, although I do wish they’d make him look a bit better. The graphics are great and the visuals very bright and welcoming with lots of colour, just like we saw with Yeti Battle of Greenhat Peak slot. When it comes to the gameplay, I do like the features that they have as it’s sometimes refreshing to have things kept simple, but there aren’t very many and they don’t last long with no option for any free spins either. That being said, the Penalty Shoot-out bonus is good fun and it’s nice to see some engagement with the player to keep things interesting, and offering up to 800x your original bet means there’s a chance to win big here as well. I think a lot of players will like Hugo Goal slot but it might not be the best for long periods of time as there’s not a lot to change things up.