Immortal Guild slot from Push Gaming brings you some interesting and unique features along with an adventurous theme that looks similar to some MMORPG’s. What’s more, it also offers a generous 1024 ways to win which I’m sure will go down well with many of you. But the question remains, does this game do enough to make it worth your time?

Well, in terms of how it looks I’m quite impressed but not blown away. The theme as a whole is nice and colourful and like I say, looks similar to some online role-playing games like World Of Warcraft for instance. There’s some nice detail and it’s a clear layout so no complaints from me here. You have a 5×4 setup with 1024 ways to win, and your job is to get a winning combination from left to right using the base symbols to win a cash reward or trigger a feature. These base symbols are listed as follows, ranked in ascending order based on their value: 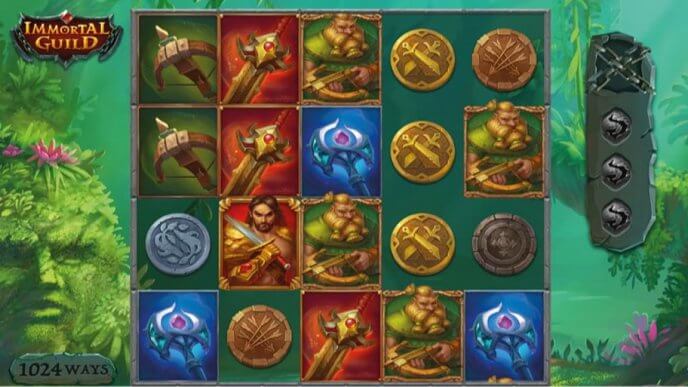 There’s a Wild symbol in Immortal Guild slot shown as a golden lion emblem. As you’d expect, it substitutes for all other symbols in a winning combination but does not have any value itself. Interestingly, it only appears during the Free Spins Bonus after 2 or more matching special symbols that are vertically adjacent which then collapse downwards and combine to form a Wild symbol. Importantly though, this Wild symbol will have an associated multiplier value equal to the number of special symbols that were combined in order to make it. I think it would have been nice to have a more standard Wild symbol available during the base game as well, even it didn’t appear on every reel, but this one does work well and improves the Free Spins Bonus.

Free Spins Bonus. Like most of these features, this one is triggered by 3 Scatter symbols. These are shown as the blue immortal stone symbol which appears only on reels 1, 3 and 5. Interestingly, these symbols are collected when they land, and by collecting 3 of them you will trigger the Free Spins Bonus. This is a fairly simple one and you will be given 7 free spins. For every Scatter symbol that appears once the Bonus is triggered, an additional free spin will be given. Don’t forget that you also have access to the Wild symbol in this Bonus.

Collapsing Reels Feature. The 3 symbols, Warrior, Mage and Hunter, are special symbols which will collapse if 2 or more of them match and appear vertically adjacent on any reel. These will collapse downwards and combine into a single symbol with a multiplier equal to the number of special symbols that formed it. For every occurrence of this feature, a respin will be awarded. 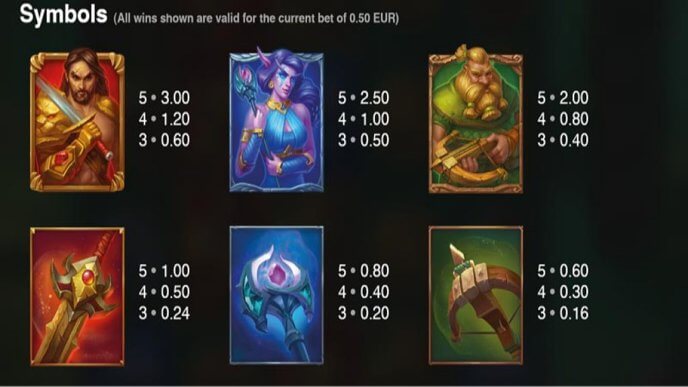 Immortal Guild slot is the latest game from Push Gaming that works in a slightly different way to many other more traditional slots out there. How does it do this? Well, mainly through the use f the Collapsing Reels Feature. This means that certain symbols can collapse into themselves to provide a multiplier up to 4x, or if triggered during the Free Spins Bonus, a Wild also with a multiplier. It’s an interesting idea, and a nice feature to have especially as it offers you a respin when it happens, but there needs to be a bit more to make the game more appealing because apart from this, all you have is a pretty basic Free Spins Bonus. I think a more standard Wild in addition to the special Wild would be nice, or just another base game feature would work. I do like how the Scatter symbols are collected though, rather than needing to appear at the same time. If you want to try something a bit different this may be a good game for you, but I’ve played better. Let us know what you think down in the comments section below.