Jack In A Pot Slot

Jack In A Pot slot is a new game from Red Tiger with a classic Irish theme and some popular features. Now I’m not often a fan of themes that are used all the time, and the Irish theme is definitely overused. That being said, if it’s done right then I don’t mind too much and I appreciate that other people’s opinions may differ. The design here is nice and clean with graphics that looks very nice; simple, but nice. The colours look great and the gold tends to have a sparkle which offers a bit of magic and overall I really like it.

The features are of course the most important aspect of most slots, and this one certainly has a few. I’ll explain how they work properly down below, but there’s a good range here although none offer particularly big payouts. The game works using clusters rather than your typical paylines on a 7×7 grid. This means you need to group symbols together in order to win any money, with more symbols in a cluster giving you better payouts. This is using the base symbols of the game which differ in value and I’ve listed them as follows, ranked in ascending order based on this value:

Jack In A Pot slot also has a few other symbols in the game like you might expect, namely some Wild symbols. There are 4 of these in fact, and each will substitute for all other paying symbols in the game. This way, you have a better chance of getting some more wins. 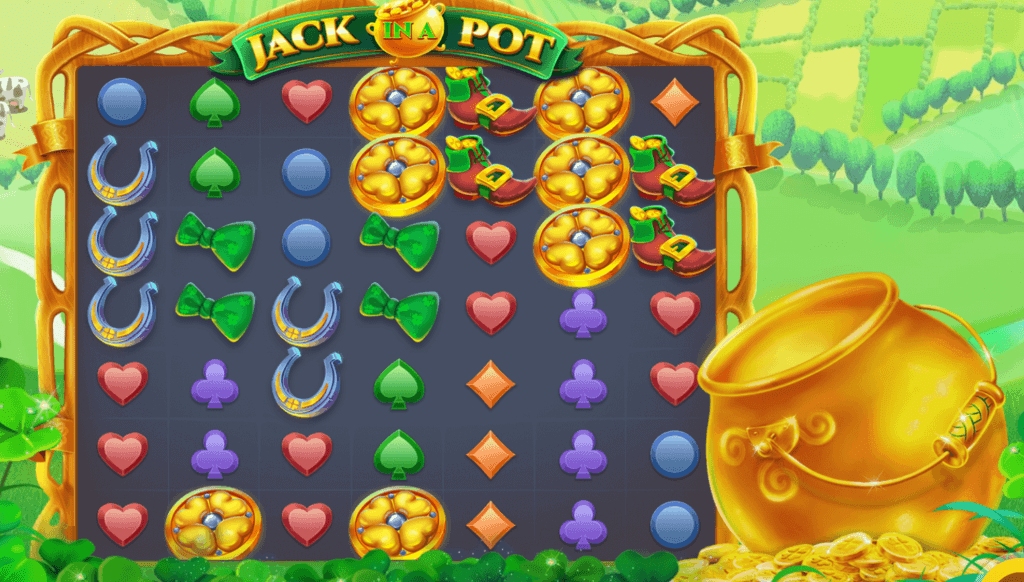 ack In A Pot Slot Bonuses and Features

Free Spins Bonus. Another symbol that’s part of the game is the Free Spins symbol, shown as a clover. The Bonus is triggered when you manage to land all 4 leaves of a clover on a single spin.

Rainbow Swaps. As mentioned earlier, there are different Wild symbols and they each have different properties. In this case, if the Rainbow Wild symbol forms part of a winning combination, then the feature is triggered and a giant rainbow will appear to swap random symbols for bigger ones, hopefully triggering more wins but this, of course, is not guaranteed.

Beer Reels. Another Wild symbol is the Beer Wild symbol. When this one forms part of a winning combination, beer taps will open up at the top of the reels causing beer to flow down those reels. In doing so, new symbols will appear on the reels, maybe giving you some nice wins.

Magic Pipe. The Pipe Wild symbols is used for this feature, and when it forms part of a winning combination then Jack himself will start to blow on his pope, converting some of the high-paying symbols into mega tiles.

Hat Trick. The last Wild symbol, the hat, triggers this feature when it’s part of a winning combination. This will suck low-paying symbols in from the reels, leaving higher-value symbols for you to get some wins with. 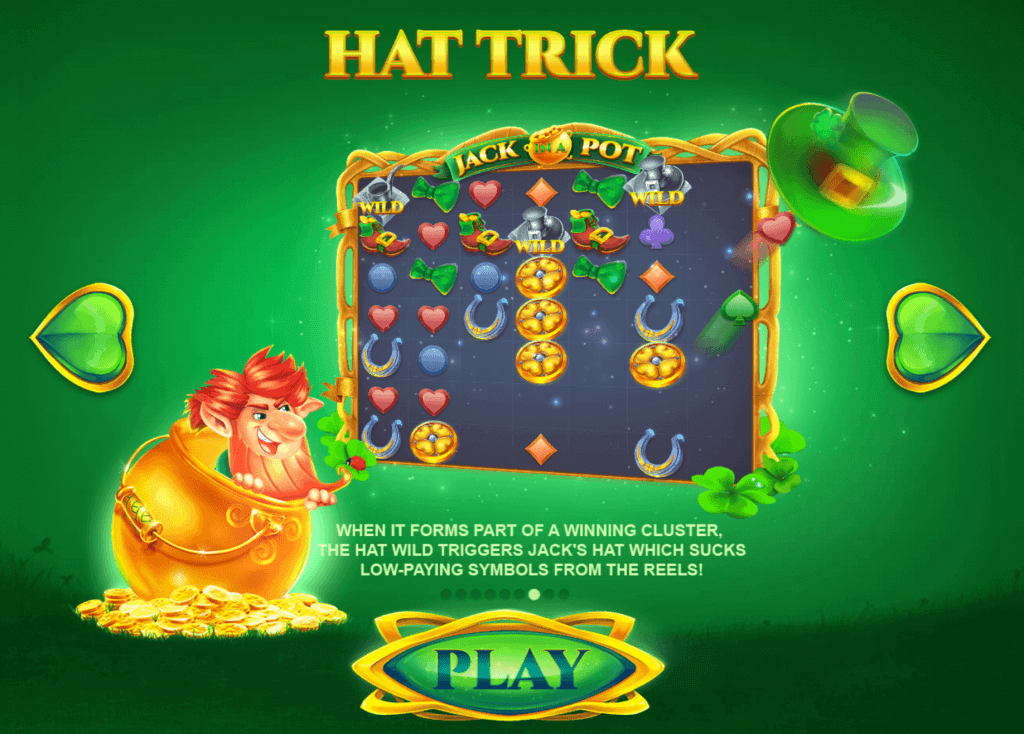 Jack In A Pot slot from Red Tiger is another Irish-themed slot with all the traditional symbols and colours. It’s one of the better-looking ones in my opinion though, with nice clean graphics and a generally simple design. The features are the more interesting aspects of the game of course. For a start, you have Cluster Pays which might not be for everyone but they are becoming increasingly popular. The Wild symbols work well to provide you with fairly simple but potentially effective features, while you also have the Free Spins Bonus as you’d expect. Overall, this is a pretty basic slot that looks good and has a few popular features to provide nice, although far from massive, payouts. If you’re looking for something that can offer you much bigger rewards you might want to look elsewhere, perhaps Who Wants To Be A Millionaire slot would be much more fitting. Make sure to let us know in the comments down below what you think and stay tuned for more slot reviews.