The Jewel Blast slot machine is a Quickspin slot game that will appeal to gem slot lovers, and it features lovely gems that don’t mean much in the base game but really come to life during the bonus feature which can award some epic wins! It’s a high variance game designed to be played for a while, as you need some patience to grab that mega win in the Blast Bonus Re-Spins feature.

The Jewel Blast slot machine uses 25 compulsory paylines meaning the player can only choose a bet size. Bets can range from 0.25 to 100 in your chosen currency. This is a good range, though even with the minimum bet of 0.25 a significant bankroll will often be needed since this is a high variance game. It’s no use playing the Jewel Blast slot machine without a bankroll that’s at least 200x your chosen bet, perhaps even 300x or more as you may be in it for the long haul.

The Wild symbol is a paying symbol, and it substitutes for all symbols except for Scatter. There are five gems of different color that are the high-paying symbols: Blue, Red, Yellow, Green and Purple, and five more card symbols which don’t pay much. The entire paytable is very skinny and most wins will deliver a smaller payout than you invested in that spin, and this is almost a rule of thumb for this game. Wins that actually deliver a profit are very uncommon, which in that regard keeps it inline with Fruit Warp, where the base game wins mostly pay less than the cost of the spins. That means the Jewel Blast slot machine base game is only good for waiting for the bonus, and the purpose of all those small wins is that you don’t lose your entire bet on every spin. 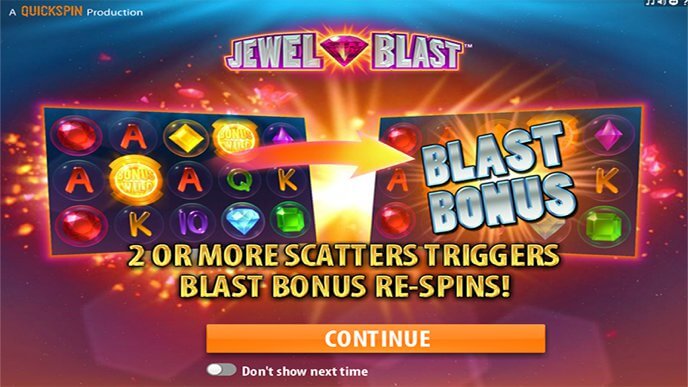 Two or more Scatters trigger the Blast Bonus Re-Spins. During the bonus sequence on the Jewel Blast slot machine, all symbols adjacent to the Bonus Wild will be blown away in a Blast Wave to create more chances to win. New symbols will fall down to fill the empty spaces and any wins will be paid out with each Blast Wave. The Blast Bonus game ends when there are no more Bonus Wilds present on the reels.

Jewel Blast definitely has high variance, as the base game doesn’t pay at all, the Blast Bonus game is difficult to trigger despite having to land only two Scatters, and the Blast Bonus game has high variance itself. While epic wins are possible during the bonus feature, you’ll need a lot of luck, and it’s not uncommon to leave the bonus feature without a generous prize.

Theoretical return to player (RTP) of Quick Spins Jewel Blast is 96.52%, which means that this slot machine is actually worth playing, and that these low payouts during the base game are so skinny because there’s a huge reward on the other end of the spectrum. The big wins are hidden behind the bonus feature, and the high RTP indicates that they’re worth the hunt. This game will be enjoyed the most by slot players who are persistent and who enjoy the longer wait because they know their chances of grabbing that epic win increase with every spin. Jewel Blast is a good slot game for such a player.