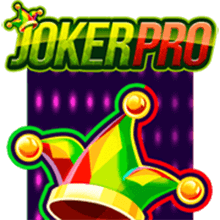 The Joker Pro slot machine may have a very vague title and it may in essence be a fruit machine, but this is one fun and rewarding slot by NetEnt, as it features a very generous bonus game that gets triggered often, usually pays a lot, and can pay up to 100,000 coins in one spin. Joker Pro was released in February 2017.

Graphics are incredibly well done for a slot game of this type, and this is probably among the best-looking slot games with this set of characters. There are six symbols in the game, all the usual suspects in fruit machines are here: Diamond, 777, Bar, Bells, Horseshoe and Clover. There is only one special symbol, and that’s the Joker Scatter. There are 10 compulsory paylines so the minimum bet per spin with a £0.01 bet per line is £0.10. The maximum bet per spin is £100. 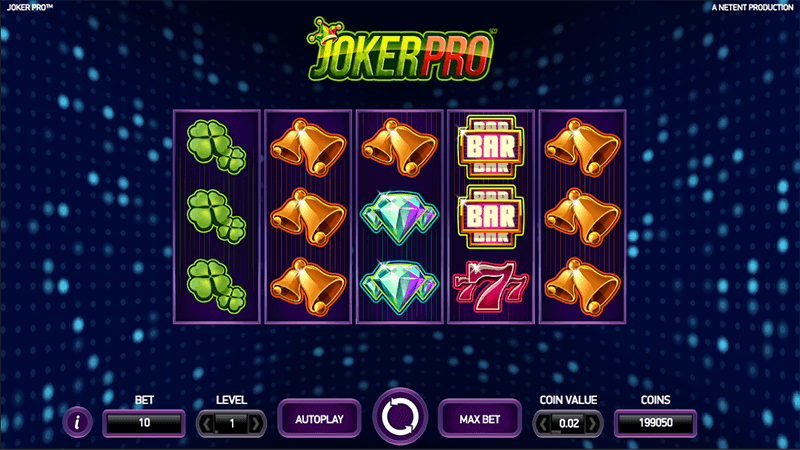 Sticky Wild Re-Spins is the only feature of the Joker Pro slot machine, and a feature you’ll want to see triggered as often as possible, as it all but guarantees a big win. One Joker Scatter symbol anywhere on your reels – and Scatter appears only on reels 2, 3 and 4 – is enough to trigger this feature. It sounds simple and it is simple, the feature does get triggered very frequently.
Reels 1 and 5 will turn into Wild reels, and three middle positions on the remaining grid are highlighted. If you happen to get another Wild, it will be sticky and you’ll get another re-spin, in which case you’ll probably be in for a bigger win while one spin only doesn’t necessarily have to produce anything meaningful. If three Wilds appear on three highlighted positions, the jackpot of 100,000 coins is awarded. And this doesn’t have to happen in one go either, as Wilds are sticky, so you can populate the three positions one by one.
Theoretical return to player is 96.8%, making this the best-paying fruit machine if you want to look at things that way. This is a decent payout for any slot game, so the Joker Pro slot machine won’t have any critics regarding this aspect of its gameplay. The base game doesn’t pay that often but you won’t care at all, as the only thing that matters in Joker Pro is landing that Joker Scatter to trigger the Sticky Wild Re-Spins.

This is one fun slot game and everyone should play it, as it features a very high RTP, low variance, and loads of fun as the bonus feature gets triggered frequently. Money can be made on this one if you’re lucky with the bonus feature. Since there is also a chance of getting that 100,000 coin jackpot, the Joker Pro slot machine fulfills all the criteria to be a good slot game. Quality stuff from NetEnt, and some players might be missing some more elaborate features, but this isn’t that kind of slot. Joker Pro has its core feature and it sticks with it.