Jump slot from Habanero caught my eye due to its unique features and gameplay. Right away from starting up the slot, you’ll notice things look a little different and I’ll admit I was a bit confused at first. The features seemed a bit strange and I didn’t think they would offer much in terms of rewards, but having played the game extensively now, I actually think it’s good fun and works pretty well.

Before I come onto the features in more detail, let’s talk about the design of Jump slot. It’s quite basic with nothing much in terms of a backdrop, but the colours are nice and bright and it looks decent, quite a bit like Fruits Gone Wild slot. The reels are what are most striking, with an unusual set-up that makes the gameplay a bit differently to what you’re used to. All you need to know though really is to spin the reels in order to get a winning combination from left to right using the base symbols, as with most other slots. These base symbols are as follows, ranked in ascending order based on their value:

In addition to these base symbols, there’s a Wild symbol, or as they call it a substitute symbol for some reason. This is shown as a Jesters hat and will substitute for all other symbols in a winning combination. Unlike with many other slots, however, the Wild symbol can only appear once during any base game spin. This is quite unusual and I’m not sure why Habanero have chosen to do that with Jump slot, but it’s worth bearing in mind. 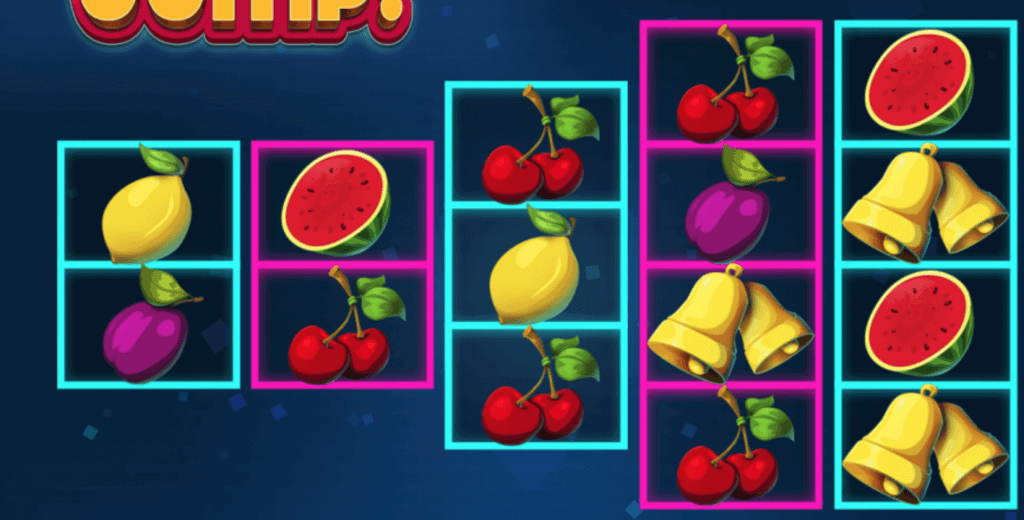 Stacked Spin. A symbol that is part of a win will activate the symbol in the Stacked Spin display. The Stacked Spin feature will trigger on the spin after you have activated all the symbols, so there’s incentive to play this slot for a reasonable period of time which I think is a smart move from the developer. On this spin, you’ll notice 5 of the same symbol, chosen at random and not including the Wild symbol, will appear in random locations on the reels before other symbols appear. During the Stack Spin, you cannot activate additional symbols and at the end of the feature, all symbols will be deactivated so you have to start again. It’s an interesting feature that I don’t think I’ve seen before, but unfortuntely I don’t think it’s especially rewarding. You could, if you’re lucky, get 5 of the highest paying symbols, the Triple Sevens, and hope to get them in good positions with additional Triple Sevens landing and maybe a Wild to help you out, but that’s not going to happen very often. In short, I’m not convinced this is a particularly rewarding feature but I do like the concept.

Re-spins and Free Games. Despite only being allowed a single wild symbol on the screen at any time during the base game, the upside is that every time it does appear you’ll be given a re-spin with the Wild symbol sticking in place. On top of this, a win during the re-spin will award you with another re-spin, so there’s potential for some nice wins here without having to pay for the spins. After each re-spin, the Wild symbol will move on to another position next to it. If you manage to achieve 5 re-spins and all the columns are 4 rows, you’ll be awarded 7 free games. The reel on the far right that isn’t 4 rows will expand 1 row for every re-spin and also at the start of the Free Games feature. 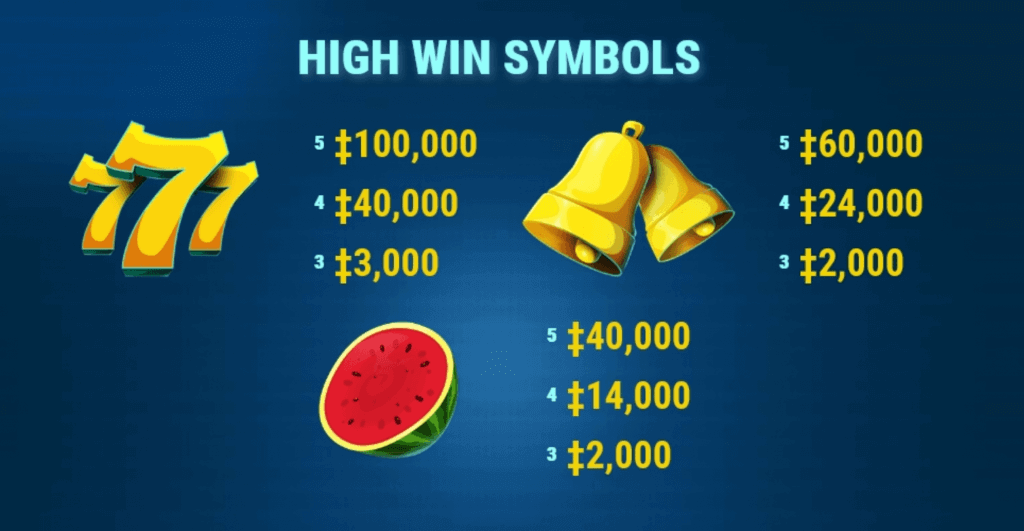 Jump slot is certainly an interesting concept and for that, I applaud Habanero for doing something different and exciting. Of course, that doesn’t always translate into a good slot, but I think in this instance it certainly makes it a tempting option. At first, I wasn’t really convinced; I didn’t think the features sounded especially rewarding and I didn’t really understand the concept of how the reels work. But once you play the game for a little while it all starts to come together and actually the payouts aren’t shabby. I don’t think this is going to be the most popular slot in the world, but I think it’s worth a try and I enjoyed it.