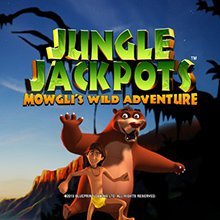 Jungle Jackpots is a popular online casino slot machine and a newly released £500 jackpot slot for British arcades and bingo halls. It’s full name; Jungle Jackpots Mowgli’s Wild Adventure is Blueprint Gaming’s multi-stake, feature packed slot with a host of random features and a set of reel based bonus games awarded at random during any spin.
Although Jungle Jackpots plays similar to Blueprints other slots, particularly Genie Jackpots, it does offer several new and interesting features, including random bonuses and reel based bonuses with the option to gamble for the next feature up. The £500 jackpot version of this slot machine, playable only in UK based arcades, bingo halls and on fixed odds betting terminals allows for any cash win to be gambled on one of four gambling reels, up to a maximum of the £500 jackpot. You can select your odds from X2, X4, X5 or X10, with each having a 100% RTP, meaning the gamble is true odds. Winnings can be gambled entirely, or part-gambled ensuring a portion is saved should the gamble lose. Blueprint Gaming’s online slots have yet to offer this gamble option. 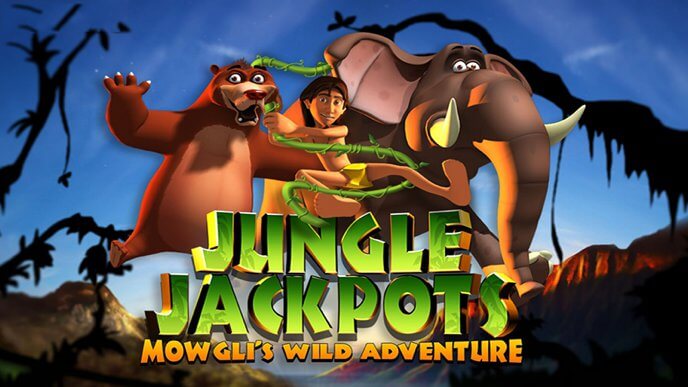 The Jungle Jackpots slot machine is packed with features and includes four random bonus games and four reels based features. As the name suggests, the random features can occur at any moment during a reel spin and award one of the following slot machine bonuses:

Monkey Mischief: This is the worst of the bunch, but it does give you a win. The monkey will pull up the reels to rearrange their positions, creating at least one winning line.

Hathi’s Expanding Wilds: This has the potential to be the best of the bunch, and as such can be pretty rare. Hathi the elephant walks across the screen expanding wilds across the reels as she goes.

Mowgli Wilds: Mowgli swings across the screen on his vine, leaving wild symbols scattered along the reels.

Kaa Locking Wilds: Wilds roll into view and lock in place, with the chance to add more via a selection of three baskets. The reels then spin off to hopefully create multiple winning combinations.

The reel based bonuses are awarded when three bonus symbols land anywhere in view on reels one, three and five. If you have played the Genie Jackpots slot machine you will recognise the same set-up whereby reels one and three host the regular bonus symbols and reel five decides which, if any of the bonuses it is. There are four bonuses that can spin in at any time:

Cash Bonus: This is a very basic slot machine bonus on Jungle Jackpots, with a simple ‘pick me’ choice from the bears left or right hand. Finding ‘continue’ will add more cash to the pot, finding ‘collect’ will award the accumulated total. This is the lowest paying feature.

Mowgli’s Cash Trail: This is one of the better Jungle Jackpots slot machine bonuses, with a picker similar to the Cash Bonus mentioned previously. This one however allows Mowgli to continue his climb up the tree, the higher he climbs the larger the awards. If Mowgli manages to climb to the top of the tree, the Golden Apple bonus is awarded whereby Jungle Jackpots will award one of the large multiplier values.

Free Spins: The second highest rated slot machine bonus on Jungle Jackpots, this one locks a wild reel in place on the third reel, then the reels then spin off. Any win locks in place with the remaining reels spinning off to create larger wins. The reels continue to spin until the win is no longer improved, that win is then banked and the remaining free spins play out.

The lower valued slot machine bonuses can be gambled for the next feature up, but before you gamble bear in mind that any of the bonuses can award large and small amounts. I tend to collect at the free spins as this can pay huge with the right symbols locking in place.

The Jungle Jackpots slot machine is one of the better ones to have been released by Blueprint Gaming in a while, with bright and colourful graphics and a host of slot machine bonuses to keep you entertained for some time.