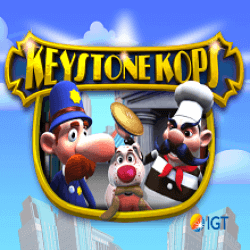 Keystone Kops slot comes to you from IGT with some great features and jackpots up for grabs. It’s based on the fictionalized, slapstick comedy policemen which became famous in the early 20th Century, featuring in various silent movies. The Keystone Kops were naturally inept policemen, who despite trying their best would always fail in spectacularly comic fashion. They term Keystone Kops is now used to describe a group who have made blundering mistakes, be it in sports, movies or elsewhere.

Moving on to the gameplay itself, Keystone Kops slot features a rather strange layout with 5 reels, but only 4 of them have 4 rows while the centre reel has only 3. There are 30 pay lines, which can increase up to 100 during the Free Spins Bonus of the slot. You can play this game from just 30p a spin all the way up to £120 a spin for those of you looking to make some big wins, and it’s available across desktop and mobile platforms. The basic aim of the slot is to achieve a winning combination from left to right using the base symbols, which tie in nicely with the theme of the slot itself. These base symbols are listed as follows, ranked in ascending order based on their value:

Additionally, there is a Wild symbol which substitutes for all of the above symbols in a winning combination, but holds no value of its own. 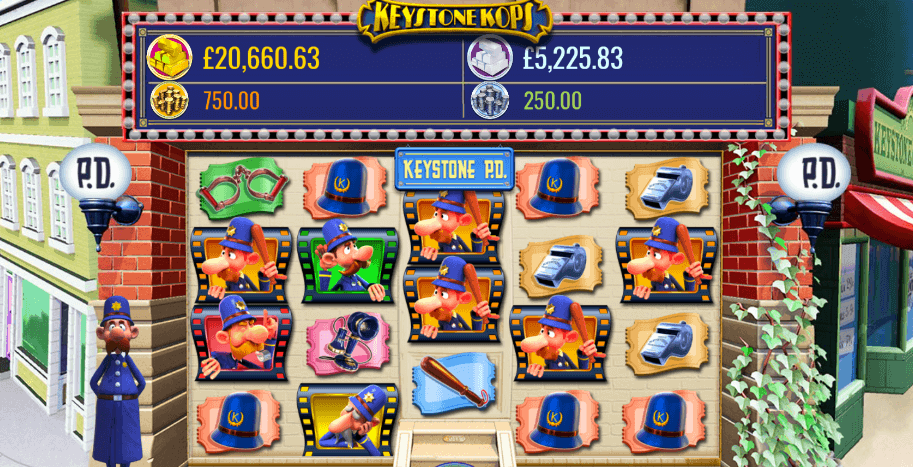 When it comes to features, there’s no shortage of them in Keystone Kops slot so there are plenty of ways to make some additional money.

Scuffle Shuffle Feature. This is triggered on any base game reel spin where a full stack of one of the officer symbols, or Wild, appears fully in reel 3. The symbols will then shuffle to different positions on the reels, with all officer and bonus symbols transforming into the symbol which triggered the feature in the first place. This may occur up to 5 times, with different numbers of symbols moving during each shuffle, and wins are evaluated after each shuffle.

Second Chance Bonus Trigger Feature. When the Keystone Kops Bonus symbol appears on reels 2 and 3 only, one of the symbols on reel 4 might transform into a Pilfering Pooch, Pie Patrol or Progressive Bonus symbols and trigger the corresponding bonus.

Pilfering Pooch Free Spins Bonus. This can be triggered by the Second Chance Bonus Trigger Feature and will award 8 free spins to start with. If 2 or 3 bonus symbols appear in any position on the reels then an additional 2 or 8 free spins are awarded, respectively. The free spins are played on an 8×5 layout with 100 pay lines. The feature ends after all free spins have been used, or 200 free games have been played.

Snacking Wilds Feature. This can be triggered during the Pilfering Pooch Free Spins Bonus with a Bone symbol appearing in any position. A Keystone Kop will then appear, turning between 6 and 21 symbols into Wilds to increase your chance of a winning combination.

Random Wilds Feature. This is triggered if a Hay symbol appears during the Pie Patrol Free Spins Bonus, transforming all symbol positions on reel 3 into Wild symbols and an additional 6 to 32 Wilds, giving you a chance of getting a lot of winning combinations.

Progressive Picks Bonus. Here you must select various vaults in order to collect gold or silver bars, or gold or silver coins until 3 matching symbols have been collected. You will then win the corresponding progressive jackpot, with gold bars being worth the most and silver coins being worth the least. The odds of winning a jackpot increase as the amount wagered increases.

Shuffle Up Feature. A mini version of Scuffle Shuffle may occur during the base game, shuffling symbols on reels 4 and 5 to improve existing wins.

Symbol Upgrade Feature. When triggered during the base game, the symbols in the highest winning playline combination are upgraded to the next value symbol.

Mystery Multiplier Feature. During a reel spin, a multiplier of 2x to 10x can be awarded. 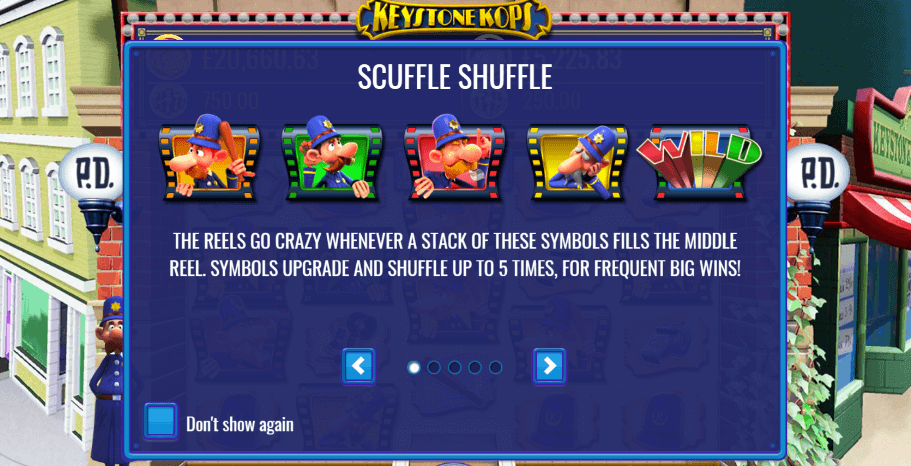 Keystone Kops slot is a comical game from IGT that features some great features and progressive jackpots, meaning there are plenty of small features to keep the game interesting and keep you going, while the big rewards are available for those looking for big payouts. The design of the game is good, although I feel like the graphics are slightly disappointing when compared to a lot of new slots nowadays such as Himalayas slot. Despite that, I think a lot of people will enjoy this slot and it’s well recommended by me.