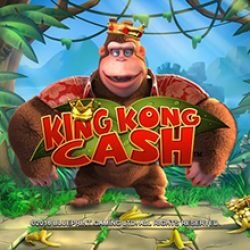 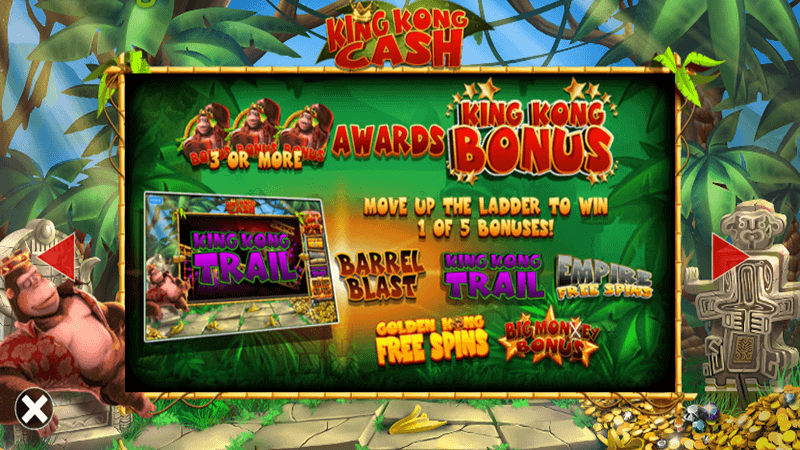 The King Kong Cash slot has a variety of bonus games, nine in total. Five of the slot bonuses come from the bonus symbols during the reel spins, the remaining four are random during any game, much like the Genie Jackpots slot, but rather this time a sleeping gorilla is awoken rather than a Genie.

When the gorilla wakes up, a thought bubble expands above his head, this will display either a mystery box or a bomb. The bomb is nothing, just an annoying anticipation that will send you straight back to the regular reel spins. The mystery box will award a bonus game, but unlike the regular reel based scatter games, these bonuses can award no cash value, which is rare, but obviously very disappointing when it happens.

The random slot bonuses are:

The King Kong Cash slot also has five regular bonus games which can be won via landing from three up to five bonus scatter symbols on the reels. Unlike most Blueprint Gaming slot machines, the King Kong Cash slot uses all five reels to display bonus symbols, most of their others use just three; reels one, three and five. You would think this would increase your chances of hitting a bonus, but it appears to be the same.

All of the bonus games can be gambled on a 50/50 basis for the next one up, and are (from the lowest rated value to the highest):

If you gamble a bonus and lose, a cash value is awarded. This can actually be quiet generous, but will always be lower than the potential feature value. Most of the bonuses also have the potential to award the Big Money Bonus game.

King Kong Cash is a great fun slot, and aside from the regular play there is a Fortune Spins game that is available only in the bookies on their £500 jackpot fixed odds betting terminals (FOBT’s).

The Fortune Spins version of the King Kong Cash slot allows for stakes from £10, up to £50 in increments of £10 at a time.
All of the stakes play the same and have the same RTP (93%), you just get an additional multiplier at the end of each round. £10 is x1, £20 is x2, right up to £50 which is x5. There are no reel spins at the start of the Fortune Spins game, you will either win a direct feature or a certain number of Fortune Spins from one up to ten.

Playing the King Kong Cash slot on Fortune Spins can be very costly, especially at the higher end of the stakes. The £500 jackpot limit makes it difficult to win anything significant so I would recommend playing at no more than £20, and ideally £10 which seems to offer a fair game.