Leprechaun Carol slot is a new game from Pragmatic Play that brings Christmas cheer and fun bonuses. We’ve seen quite a few Christmas slots lately like Jingle Spin slot and in terms of the design this one doesn’t offer anything too special, but the features are certainly enticing and I’ll explain more on them shortly. To get to these and win money, you need to spin the reels and get a winning combination from left to right using the base symbols. These are listed as follows, ranked in ascending order based on their value:

Leprechaun Carol slot, as you can see, has a Wild slot like most games. This one happens to be slightly more valuable than the Leprechaun symbol and also substitutes for all other symbols in a winning combination apart from the Scatter symbol. The Scatter symbol appears only on reels 1, 3 and 5 (unlike the Wild symbol which appears on all reels) and with 3 of them present on the reels you can trigger a random Bonus Game. 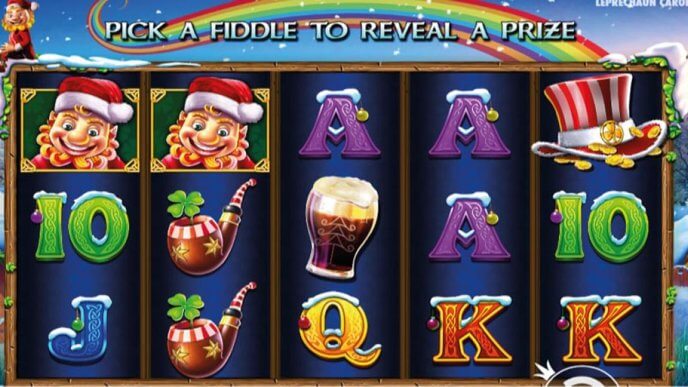 Raining Wilds. This is a base game feature whereby a random number of Wild symbols can be added to the screen to hopefully get some extra wins.

Pick A Fiddle. If this feature triggers, you can choose 1 of 5 fiddles to reveal a cash prize.

Giant Symbol. This slot also has Wild symbols available which are 3×3 in size and can even include the Wild symbols if you’re lucky.

Bonus Games. There are three Bonus games that can be triggered with the Scatter symbol. These are chosen at random and include: 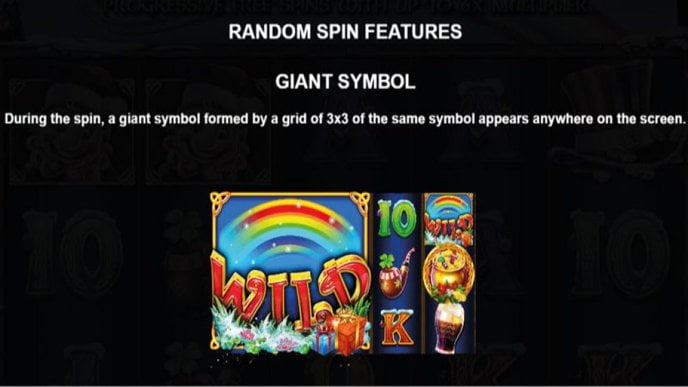 Leprechaun Carol slot from Pragmatic Play is another Christmas slot with a festive design, offering a wide range of features that are very appealing. The in-game bonuses are pretty good and can even result in a big win on their own like with the Giant symbol, but the main thing people will be interested in here is the choice of 3 Free Spins Bonuses which each have their own properties. They can all offer some good rewards but the giant symbol feature can generate some massive wins on a single spin whereas the others are more likely to instead offer more regular yet slightly smaller payouts. That being said, the multipliers are pretty generous and you get quite a few free spins so all of them can work very well. I personally found this slot very rewarding and fun to play so I recommend you try it out too.