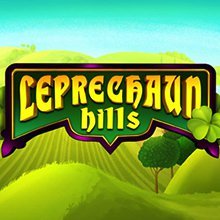 Leprechaun Hills is a Quickspin slot game released in March 2017 and it features all the usual Irish symbols, with the Leprechaun as the title character. It’s a fun slot for fans of simple slots with some fun features. The Leprechaun Hills slot machine has five reels with four symbols on each, and all symbols except for Wild and Scatter are stacked on the reels, similar in a way to another popular slot Phoenix Sun.

Bets on the Leprechaun Hills slot machine can range from £0.24 up to £80 for 40 compulsory paylines. There are ten symbols in the game, five of which are card numbers, and five are higher-paying symbols: Guinness Beer, Mushroom, Four-leaf Clover, Horseshoe and Leprechaun. There are also Wild and Scatter symbols.
Whenever a bigger win is imminent after first two or three reels indicate so, the game will slow down and the remaining reels will spin much slower. While this increases the anticipation, it also considerably slows down the game, and doesn’t always produce a big win that was worth waiting for. This feature won’t be everyone’s cup of tea.
Graphics should be better, as this slot doesn’t feel like it was released in 2017. Unless Quickspin intentionally wanted to release a slot game that has graphics of this type, but it’s just poorly done, as if not enough budget and time were allocated for development of this title.

On the Leprechaun Hills slot machine, any win with a medium symbol will trigger the Lucky Repsin bonus where the reel strips become populated with massive stacks of the trigger symbol for even bigger prizes. This bonus feature increases the fun of the base game, as well as your bankroll. It’s visually impressive too, and is actually the only part of the game where graphics dominate the gameplay.
Three or more Bonus Scatter symbols trigger the free spins game, it’s always exactly 7 free spins, and triggering this bonus game is rather rare in Leprechaun Hills. Free spins have a mystery symbol which turns into a random medium symbol, much like Luck O’ the Irish if you are familiar with that one. There is a 50% chance that symbol will become the best possible. This makes the free spins bonus much more rewarding to the base game, though it’s still not spectacular as there is no re-trigger. Most of the biggest wins in the game will be coming from the free spins feature, although the base reels can still be very generous at times.

Theoretical return to player (RTP) of the Leprechaun Hills slot machine is 96.41% which is consistent with other similar slots by Quickpin, and this number represents a decent payout. Variance is medium to high, and the game will usually drag you deep into negative balance before it delivers a big win. Also, those big wins aren’t that big, as there is no jackpot in Leprechaun Hills, but it’s quite possible to win 100x your bet. All in all, Leprechaun Hills will appeal to players who want to have a little fun, who want to play through these bonus features, and the high RTP means the slot won’t be robbing you of your money.