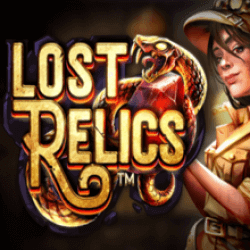 Lost Relics slot by Net Entertainment is a new addition to their Cluster Pays series, containing a unique feature which can offer some good rewards just like we saw with Aloha! Slot. The theme here as you can imagine is one of adventure, taking you on an exciting journey through ancient ruins in the hope of finding some long lost treasure! There are a good range of features included in this slot which help to keep it engaging and rewarding at the same time, including the Cluster Pays mechanic that’s proving to be quite popular with players.

Starting with the basics, this is a 5 reel video slot with a minimum bet of just 20p, and a maximum bet of a huge £400, available on desktop, mobile and tablet platforms. The aim of the game is like most others, whereby a winning combination of certain symbols from left to right will grant you a prize in the form of cash or a bonus which could offer rewards such as free spins or multipliers. The base symbols are listed as follows, ranked in ascending order based on their value:

There are of course other symbols which appear during Lost Relics slot which can activate certain features and these will be discussed shortly.

Random Features. There are three different random features available during the base game, with up to 5 being offered on any spin that results in a win. These features are as follows:

Free Spins. 3 Scatter symbols will activate this feature and award 10 free spins, appearing on reels 1, 3 and 5 only.

Hidden Chest. During the Free Spins Bonus, a chest that covers several spaces is hidden behind the reels in a random position. The spaces under a winning cluster will become uncovered and reveal part or all of the chest when part of a winning cluster. These spaces remained uncovered until a chest is revealed, at which point they reset and the feature starts again. There are 3 chests, small, medium and large, with the large only available after the first 2 chests have been revealed. The chests will offer you a random number of the 3 random features discussed earlier, with the larger chests offering more features.

Overall, I think Lost Relics slot is a great new addition to the Cluster Pays series from Netent. I’m a pretty big fan of the Cluster Pays feature itself, but I especially like how they’ve used it here to provide additional awards such as revealing the chests. The theme isn’t especially original but is good enough with satisfying, although far from ground-breaking, graphics. In short, this is a fun slot with regular features appearing during the base game to keep it engaging and a good range of rewards to be won.