Mars Attacks! Slot from Blueprint Gaming brings you a classic action-movie theme from the ’90s based on the hit movie of the same name starring Jack Nicholson. They’ve done it well here in terms of the design, but most impressive is the way the features work and use the theme as well. To start playing the game, you need to spin the reels to get a winning combination from left to right using the base symbols which are as follows, ranked in ascending order based on their value:

The Wild symbol in Mars Attacks! slot, shown as a skeleton for some strange reason, is the joint most valuable symbol in the game but also substitutes for all other symbols in a winning combination apart from the Bonus symbol. 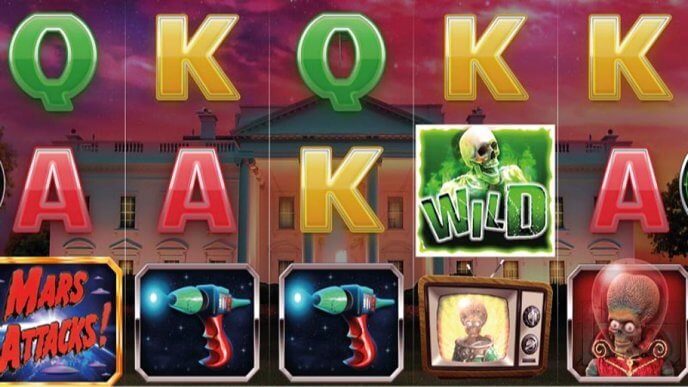 Random Modifiers. There are modifiers in the game which can be triggered randomly. Without going into too much detail on each of them, these include extra Wild symbols, respins with winning symbols only and mystery symbols.

Mars Attacks! Bonus. This Bonus, like so many, is triggered by 3 or more Bonus symbols shown by an alien. This will give you entry into one of the 5 Bonus rounds. If you manage to land 4 symbols you’ll automatically eliminate the lowest paying feature Spy Hunter, and if you’re lucky to land 5 Bonus symbol then you’ll automatically be awarded the highest paying feature Final Stand. If you aren’t lucky enough to land 5 and just get 3 or 4 symbols, you’ll have to pick one of 5 zones which will be invaded by UFO’s and then you’ll be awarded one of the 5 Bonuses. The zones are:

The Bonuses are (in ascending order): 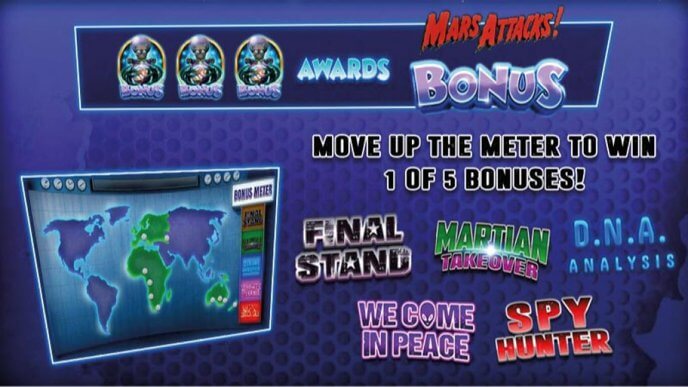 Mars Attacks! slot from Blueprint Gaming has a huge range of features that are available either during the base game and are triggered randomly, or from the main Bonus which has 5 different features within it that vary in terms of their value. Some are pretty basic and won’t offer much I the way of rewards, but some can certainly offer good payouts with nice multipliers. The theme is great too and the bonuses reflect that with fun names and interesting ideas. Overall, a fun slot with decent returns that’s worth checking out at Casumo now.