Money Monkey slot might not have been on your radar coming from one of the smaller software developers in the business, but it caught my attention and I wanted to give it a try. Often these types of games can really surprise you as they tend to change things up to really make a difference. Fortunately that’s exactly what Gameplay have done here by offering a unique feature that you can pay for to increase your chances of winning. It’s not completely out there, but it’s a nice feature to have and I’ll explain more on how it works shortly.

First, let’s talk about how the game actually looks because I was pretty impressed with the graphics here that looks like something from a Nintendo video game. The theme as a whole is great, and the detail is excellent with nice, bright colours. This is right up there with some of the best looking slots I’ve seen from any developer so top marks here. The basic rules of the slot are pretty standard, with a 5×3 setup and the aim to get a winning combination using the base symbols from left to right to get a win. These are listed as follows, ranked in ascending order based on their value:

In addition to the above base symbol, we also have a Wild symbol shown as a golden cube which appears only on reels 2 and 4. The Wild symbol, as you might expect, substitutes for all of the above symbols apart from the Scatter symbol. 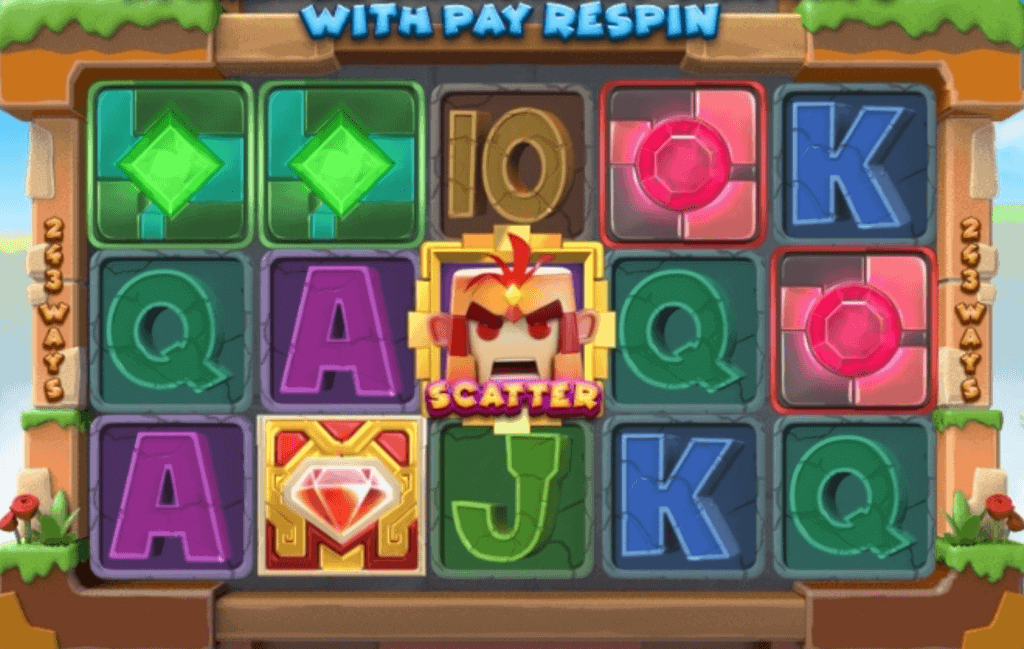 Pay Respin Feature. This feature allows you to respin a particular reel while holding all the others in place, hopefully giving you a better chance of getting a win. The feature is activated only at the end of a spin which actually has a chance to win, but respinning a reel does come at an additional cost, unsurprisingly. It’s also worth noting that only new winning combinations that result from the respin are paid out. Also, if you do change the bet and autospin mode, the feature will be disabled and it is also not available during or just after the Free Spins Bonus.

Free Spins Bonus. The Scatter symbol is used to trigger the Free Spins Bonus as is the case with most slots these days. In addition to that though, it also provides a payout for being in a winning combination of its own from as little as just 2 in a row, although the value is pretty small compared with other symbols, even when you get 5 of these in a winning combination. With regards to triggered the Free Spins Bonus, however, you need to get 3 or more of these symbols on the screen at any one time. Doing so will grant you 15 free spins, whether you land 3, 4 or even 5 of these symbols. They can be retriggered though if you land another 3 or more Scatter symbols, giving you another 15 free spins. During the free spins, all wins are tripled meaning that if you manage to get winning combinations with the high paying symbols like the Blue of Red Jewel, you could see a nice payout at the end of the bonus, especially if it keeps retriggering. Remember that the Pay Respin Feature is not available during this bonus.

Money Monkey slot isn’t going to be the next Starburst slot or anything like that, but that’s hardly to be expected when you consider the fact that this is a relatively small software developer like Gameplay that hasn’t really established itself as well as other companies that often make the big games. With that in mind, I actually think Monkey Money slot is an all-around strong game, with some nice graphics and overall good display, and some solid gameplay with a nice free spins bonus that can be retriggered. The Pay Respin Feature is also pretty interesting and not something you see very often. How viable it is remains to be seen and it won’t appeal to everyone, but I think as a whole Gameplay have done a great job with this slot and I can certainly vouch for it.