There are countless games available online that utilise primates as their base theme, the brilliant King Kong Cash for example. You don’t really have to look that far for them. However, not so many of them take that theme and convert it into something even more impressive. The Monkey Prince slot from IGT on the other hand does exactly that. It’s almost like an animated version of Planet of the Apes, with a monkey dressed in armour stood to the left-hand side of the reels. Not only that, but the Monkey Prince slot incorporates this theme very nicely throughout the background and the reels, ensuring that it’s well and truly built in. The Monkey Prince slot has also got that oriental feel to it, which the soundtrack brings out on an even grander scale. Wagers in this game range between £1 up to £30,000 per spin, which is an absolutely insane maximum bet amount. The betting shop version of this slot has lower stakes, up to £2 per spin.

The Monkey Prince slot itself is made up of a set of five reels and four rows, so it’s a little bit larger than what is considered to be the average layout for a video slot. Alongside this setup, IGT has chosen to add a total of 60 pay lines into the game as well. These lines are not something that you’re able to change around, so you’ll always have this amount in play. There are four lower-paying standard symbols and six higher-paying ones, so depending upon which of these you bring into view on a pay line, you’ll receive differing pay-outs.

Graphically speaking, the developer has brought together a very appealing game, and as spoken of, the soundtrack further enhances the theme to perfection. 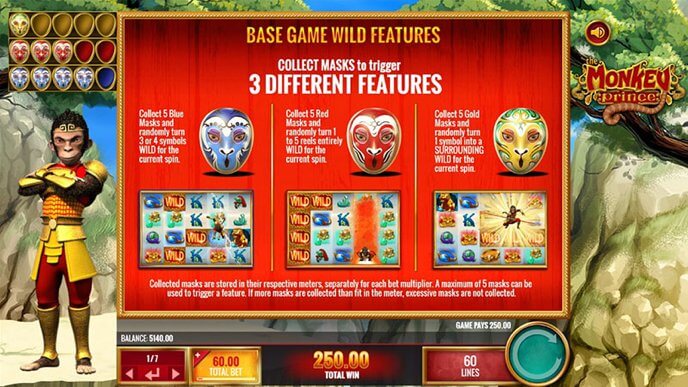 You’ll find the base game of the Monkey Prince slot to be quite thrilling overall no doubt, but not only that, there are some appealing bonus feature rounds for you to trigger within it as well. They exist in the form of the following features:

Base Game Wild Features: You’ll see that while the reels spin, icons of different coloured masks will come into view. Every time one lands on the reels, it will be stored in the spaces above the monkey prince himself on the left-hand side of the reels. Once you collect five of any of these, you’ll trigger a different wild feature. Collecting five of the blue mask will randomly turn between three and four of the standard symbols into wild additions. Collecting five of the red mask ensures that between one and five of the reels turn entirely wild on the current spin. And collecting five gold masks will randomly turn one symbol into a surrounding wild for the current spin. Wild icons, whether the standard one showing up or being triggered via one of the masks, will substitute for all other symbols on the reels to help form a winning combination. The only exceptions are the scatter and mask symbols.
These wild masks play out slightly differently online to the fixed odds betting terminal counterpart, which are awarded via landing on reel three. 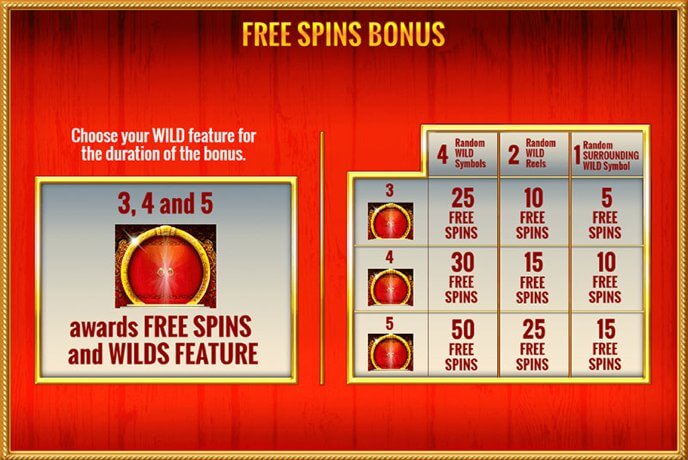 Free Spins: The game’s scatter symbol is the one that will activate the Free Spins round, and you need to bring three or more of this one into view anywhere to do so. Before this round begins, you need to choose your wild feature, which will come into play for the duration of the Free Spins bonus round. The options are as follows:

The Monkey Prince slot is a fun game, and fans of IGT slots will certainly enjoy it. The expanding wilds and the wild reels have the most potential, but that doesn’t mean the rest of the game will leave you without much action.