The Moon Princess slot from Play’n Go isn’t actually just about one princess, but three different ones; Love, Star and Storm. Each of these princesses has their own specific power, which can turn the tide of this slot game for you as well. Your only task is to spin the reels and see what outcome arises. However, not only do you have a great base game to play through with the Moon Princess slot, but also a selection of inbuilt features to enjoy too. Being a Play’n Go slot, it also integrates high-quality graphics throughout, while a very nice piece of soundtrack music can also be heard playing at the same time. Placing wagers in the Moon Princess slot is easy to do. You’ll need to select a specific bet value between 20p and £100 from the ‘Bet’ menu. Meanwhile, you’ll also find ‘Auto Play’ is a function of Moon Princess, giving you the chance to set the reels off spinning several times at the same bet level.

The layout of the Moon Princess slot is a little bit different to what is considered the standard for a video slot. While it does feature five reels, it also has five rows as well, meaning that the setup is square-shaped, rather than rectangular. Furthermore, you won’t find any specific pay lines in this game either. Instead, wins are formed simply by matching three or more of the same symbol in a row, either horizontally or vertically. Winning symbols will be removed from the reels whenever they form part of a combination, and any symbols above them will drop down into the gaps. The symbols that appear on the reels of the Moon Princess slot begin with four lower-paying additions. You’ll then see single symbols of each of the three princesses, as well as another that features all three of them.

Of course, a Play’n Go game isn’t going to be possible without stellar graphics, which exactly what this slot brings to the table. 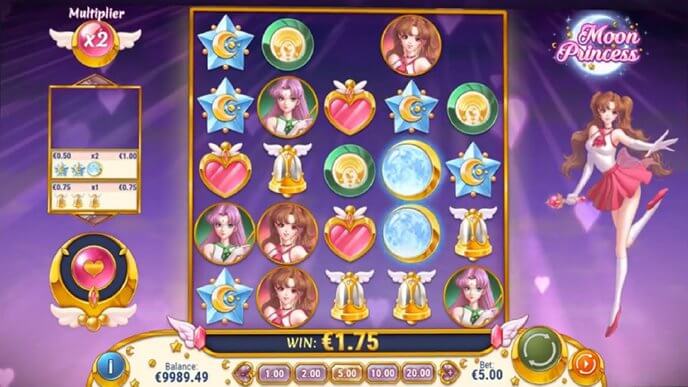