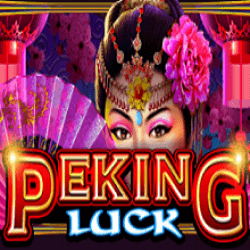 Peking Luck slot comes from Pragmatic Play, a company that we haven’t actually reviewed here yet at StopandStep but, as you’ll see later, have come up with a game that has a lot of potential and should appeal to the majority of players. The theme is a very simple one with Chinese origins and features many classic symbols such as fans, dragons and drums. It’s certainly not going to win any awards with the way this slot looks, the graphics are very standard and there’s nothing to really draw you in, but instead, there’s a real focus on the gameplay which is, of course, the most important part.

I’ll come onto the features and bonuses shortly, but what Pragmatic Play have done here is take some of the most popular and sought-after features and put them together in one bonus that could offer some very big rewards. To play the game you must spin the reels, of which there are 5 with 3 rows as you’d expect, and in doing so try to land a winning combination using the base symbols from left to right. These base symbols are based on the theme itself, and are listed as follows, ranked in ascending order based on their value:

The Wild symbol is portrayed by a young lady with a pink fan and substitutes for all other symbols in a winning combination apart from the Scatter symbol. As well as this, it’s also by far the most valuable symbol in a winning combination, offering wins of over 10x the value of the second highest base symbol, the Mask (excluding the Scatter symbol). It can appear on all reels, and any win that contains at least one Wild symbol that substitutes for another symbol will be doubled.

Free Spins Bonus. As you’d expect, and as is common for most slots these days, this is triggered by 3 or more Scatter symbols anywhere on the screen and the Scatter symbol can appear on any reel at any time. It’s displayed as a large golden Gong with the words Free Spins on it, and also serves as the second most valuable symbol in the game behind the Wild symbol. In order to determine how many free spins are to be awarded, you must first select 1 of the 6 objects shown on the screen and this will reveal a number of free spins. Once you have done this, you must then choose another of 6 objects which will give you a random multiplier which will apply to all wins during the Free Spins Bonus. As with the base game, any win that has at least 1 Wild symbol substituting for another symbol in it will multiplier by 2, on top of the multiplier that you chose at the beginning of the bonus. Finally, if you manage to land another 3 Scatter symbols anywhere on the screen during the Free Spins Bonus, you will be given another 10 free spins with the multiplier you currently have being applied to those free spins also. Unlike some other slots, there is no limit to how many additional free spins you can win so you could see yourself making a large amount of money here. That being said, you’re unlikely to have this happen too many times, once or twice is probably the limit for most people. This bonus uses a different set of reels to the base game.

Unfortunately, the aforementioned features are all that’s available in Peking Luck slot. Despite the fact that it only has one bonus, it certainly is a good one and can be very valuable. As Free Spins Bonuses go, this one has just about everything you could want including, multipliers, an unlimited potential for extra free spins and even more multiplying opportunities with the Wild symbol, a feature that is also available during the base game. I think this will appeal to many people; it’s simple despite the fact that it lacks anything original, it takes the most popular features that people enjoy and puts them together in a very well made bonus that can make you a lot of money. I’d definitely recommend checking Peking Luck slot out as I think Pragmatic Play have done a great job here. Don’t forget to check out other slots here.