The Phoenix Sun slot is an innovative Quickspin title released in December 2016 as antipode for all those snowy Christmas-themed slots. The game is unique as it features a 6×5 grid, half of it hidden most of the time, but with a special feature you get to reveal the hidden tiles one by one or all at the same time. And this leads to a lot of fun and lots of money in the Phoenix Sun slot free spins bonus.

Bets can range from £0.25 up to £100. The slot has 243 ways to win, though actually this can go up to a massive 7776 when the reels expand. The Phoenix Rising slot feature can expand the game as much as a 6×5 reel grid with up to 7776 ways to win. Any Phoenix Wild symbol on a winning bet line triggers the Phoenix Rising slot Respins. Every Phoenix Wild symbol will remove three random tiles from the cover above the 3×5 grid, and will trigger a respin with the newly expanded reel layout, and once you enter this chain reaction you are likely to get more and more tiles revealed. The slot will respin until no more Phoenix Wilds appear in a winning combination or you enter the free spins game, totaling up your wins as you go. 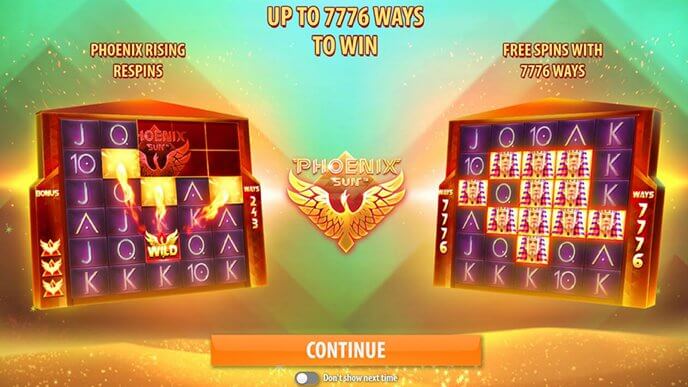 When you collect 5 Phoenix Wild symbols, you’ll get 8 free spins. The free spins are played in the full 6×5 grid with 7776 ways to win. Due to the nature of the game, not every spin on that giant grid will produce a win, but when the win does come your way, it will be massive.

There are a total of ten symbols in the Phoenix Sun slot. The five low-paying ones all pay the same, and three of the high-paying ones pay the same: Scarab, Cat and Dog. Cleopatra and Pharaoh are the best-paying symbols in the game. There are also two Wild symbols, the normal one and the Phoenix Wild, which behave the same, other than the fact that Phoenix Wild triggers the most important feature in the game. Although the Phoenix Sun slot is unique, you may see similarities with the Raging Rhino slot, a player favourite.
Graphics are adequate for this unique gameplay, and are simple enough to make the important symbols stand out. There’s not too much added on top of this game, this is just a simple slot that’s actually quite complex, and it works well. While other games have to resort to separate bonus features, this one does not, it has a winner in this innovative gameplay which can expand the reel up to 6×5.

Theoretical return to player (RTP) of Phoenix Sun is 96.08% so the slot doesn’t fail to deliver in this aspect either, and it will satisfy the more demanding gamblers that need a decent payout. Most importantly, the game pays often, and keeps you involved by letting you have a taste of that Phoenix Rising slot feature that’s at the core of this game. All players should definitely try this slot out, it’s incredibly fun to play.

The Phoenix Sun slot is a superb online slot machine from Quickspin. This 5 reel slot with 243 ways to win can be played from a minimum of 0.25 up to a maximum of 100.00 online at Casumo and other online casinos. During the free spins bonus feature, you have the potential to win even more when the 243 ways to win jumps up to a whopping 7,776 ways to win (I took their word for it, I didn’t count!). Every free spin offers the ability to win up to 1,716x your stake, so mega cash can be won playing this slot title.

Enjoy all that Phoenix Sun has to offer via desktop, mobile and tablet devices.

You will encounter many symbols on the reels of the Phoenix Sun slot, these include Cleopatra, Tutankhamen, Anubis, Scarab, two wilds and standard card values 10, J, Q, K and A also making an appearance.

During the base game, the maximum wins will come from spinning in five of a kind of the Tutankhamen symbols, this will award 400.00 on a 100.00 stake. Big wins will come during the free spins feature where there is eye-watering cash up for grabs in every spin.

There is one big feature that makes up the Phoenix Sun slot machine, and that is the free spins feature. But there are more to be had from this slot too, including;

The slot machine itself is a 3×5 grid with 243 ways to win in every spin. Based on Egyptian mythology, the reels hide a substantial wealth that can be won. According to ancient legends, the phoenix rose from the midst of the flames to be reborn. The reels are set within a hot sandy desert with sky-scraping pyramids glistening in the background. The reels are placed in what looks to be a statue made purely from gold and its what’s beneath the surface that can boost your bank balance; drastically.

For a medium variance slot machine, you can expect to be playing for long periods of time before triggering a decent win or the bonus features, but the returns offered are well worth the wait. There is a return to player (RTP) percentage of 96.01% with this online slot machine. If you can trigger the free spins bonus, you are guaranteed to win some big amounts of cash, and the winning potential and possibilities are further extended with the 7,776 ways to win on every spin. The possibility of wining 1,716x your stake on every free spin has the potential to return 171,600 on a 100.00 stake!