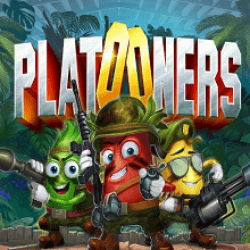 Platooners slot is a fun new game from Elk Studios set in a film studio and following a group of action heroes known as the Platooners. These stars are locked and loaded and ready to fight off evil snakes and help you win money. It’s a good concept and helps the game stand out from sometimes rather boring and repetitive themes like the ones based on Ancient Egypt such as the recently reviewed Tut’s Twister slot. There’s certainly a lot to like here and the idea is an interesting one, but is it worth your time?

Let’s start off with the display and I have to say the graphics are top notch. Everything’s bright and colourful where it needs to be and there’s quite a lot of detail too. There are some good animations as well that help bring the game to life and make things more interesting. The mechanics of the game are really what set it apart though with a brilliant bonus feature that has you really interact with the game and turn it more into a video game rather than a slot, but I’ll go into more detail on that soon. Platooners slot has a 5×4 layout with 178 paylines and can be played at a minimum of 20p and a maximum of £100. The RTP is a pretty healthy 96.3%. To play the game is pretty simple, you need to try for a winning combination using the base symbols from left to right. These are listed as follows, ranked in ascending order based on their value: 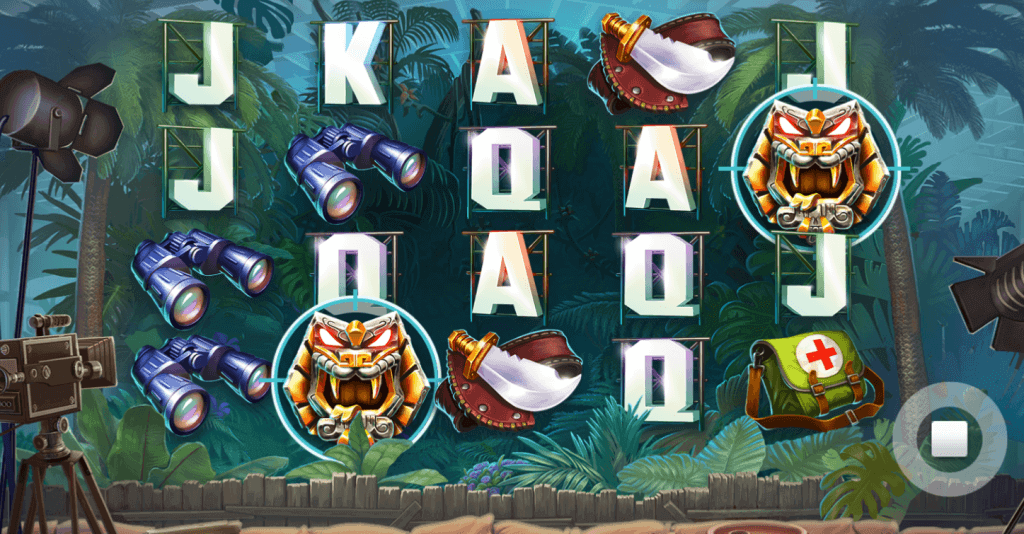 One of the interesting things about Platooners slot is the Action Spins! feature which triggers randomly in between spins. One of the Platooners may appear and fire their weapons at the reels to start them spinning again, with each having a unique effect on the reels:

Red Platooner. Armed with grenades, he will throw them all over the reels and create random Wilds for the next spin.

Green Platooner. This guy fires his rockets at reels 1 and 3 filling them with identical symbols to give you a better chance of a win.

Yellow Platooner. Using a heavy machine gun, bullets are fired at reels 2 to 5 once the first reel stop to give you at least one 5 of a kind. This could lead to you triggering the bonus feature Snakes of Fortune if you’re lucky.

Snakes of Fortune. This is triggered by 3 or more Bonus symbols anywhere on the reels. You start off with 15 rounds of ammunition. The game is split into 3 levels where you must fight a snake and defeat it in order to progress up a level which will be more difficult but have higher rewards. Each Platooner takes turns in attacking the snake and every Bonus symbol above 3 which triggered the bonus will provide additional attacks at the start of the level. Once you advance to the next level, the Platooners weapons will upgrade doing more damage, with the ability to activate more Platooners and increase ammunition during the bonus. You can also unleash bombs if you’re lucky doing good damage to the snake. Level 3 is challenging but can give you some very big rewards. 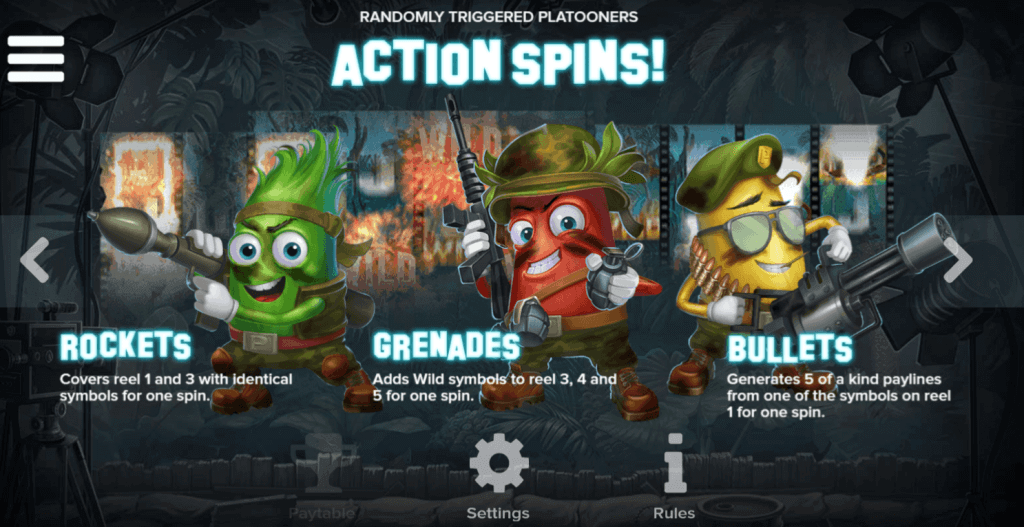 All in all then, Platooners slot is really quite impressive and I think it’s great what Elk Studios have done to come up with something original. Ok, maybe not completely unique as we have seen some similar slots before but it definitely strays from the often monotonous themes and bonuses and that’s what I think a lot of people will appreciate. It’s a medium variance slot with a maximum win of 2500x bet which, when coupled with an RTP of 96.3% also makes this game fairly appealing from a profitable point of view. I’m certainly going to recommend you give it a go, especially if you’re becoming bored with the more traditional slots.