First, let’s talk about the theme and design. The first thing you’ll notice is probably the 6×6 layout which is pretty unusual compared to most games, many of which still use 5×3 grids. I like this and I wish more slots would use different layouts too. The graphics as a whole are fairly average; nothing exceptional but it doesn’t look bad either. There’s not really much in the way of animations which is a shame though. When it comes to the game’s features, there’s really only the Free Spins Bonus which isn’t bad as I’ll explain shortly, but it would have been nice to see more. To play the game, you just need to spin the reels to try and get a winning combination from left to right using the base symbols which I’ve listed as follows, ranked in ascending order based on their value:

There are some additional symbols in Primal Megaways slot that have unique properties, potentially making them quite valuable. The Paw Print symbol serves as the Wild symbol in the game, substituting for all the symbols in a winning combination apart from the Bonus symbol. It can appear on reels 2, 3, 4, 5 and 6 only. The Fire symbol is able to reveal all of the aforementioned base symbols. 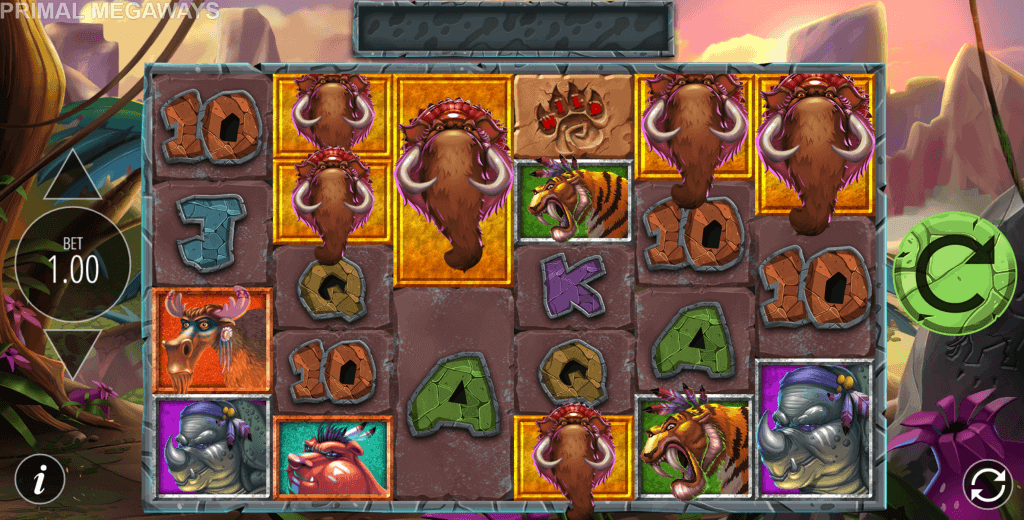 Primal Bonus. This is a relatively straight-forward Free Spins Bonus type game where the Bonus symbol will award you with a number of free spins as well as multipliers that are assigned to Wild symbols. This works as follows:

Furthermore, to make the Bonus more interesting, if you land the Green Bonus symbol on reels 2, 3, 4, 5 or 6 during the Primal Bonus you’ll be given another 5, 10, 15, 20 or a maximum of 25 additional free spins. It’s also useful to know that there’s a guarantee that the Bonus will award you a minimum of 10x your total bet, so you can be sure to come away with a decent payout at the very least. If the Bonus ends with a payout of less than 10x your total bet, it will be retriggered. 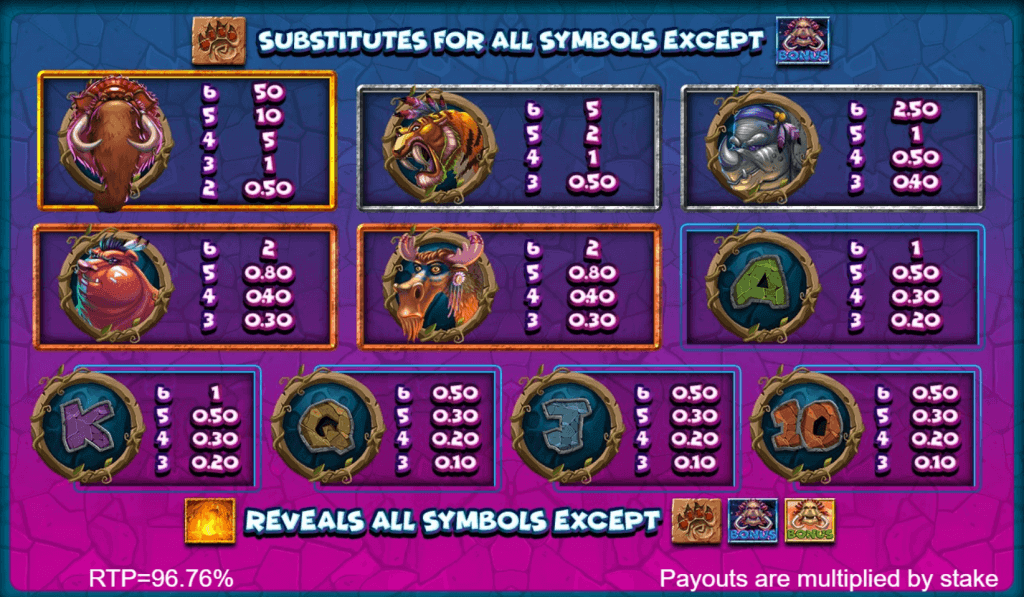 Primal Megaways slot from Blueprint is another one of their games to use Megaways and that’s not a bad thing by any means. With a whopping 46,566 ways to win there’s certainly a lot of appeal to play the slot. The Primal Bonus is pretty decent, offering quite a few free spins as well as multipliers for the Wild symbols to improve payouts, but that’s basically all the game has to offer. I get the feeling that Blueprint are relying too much on the ways to win aspect rather and neglecting other important features like game design or other bonuses. Primal Megaways slot is definitely a good game overall, but I think they could have done more here to really make it exceptional.