Pumpkin Patch slot from Habanero is a new game in time for Halloween but unlike some of the previously reviewed slots such as Zombie Circus slot, it’s far less spooky and creepy. Instead, the only real resemblance is that it revolves around pumpkins and there’s a slightly strange looking Pumpkin Man involved. All in all though, I think Pumpkin Patch slot is a decent looking game that certainly won’t win any awards with its revolutionary graphics and isn’t really Halloween focused but looks just fine to me.

The gameplay and features are of course the most important aspect to any slot, and I’m pleased to say there are some interesting features involved here, but I’ll go into more detail on them shortly. For now, you just need to know that you have a 5×3 grid with 25 paylines, and more importantly these pay both left to right and right to left, something that seems pretty uncommon in slots. Essentially though, you just need to spin the reels to try and get a winning combination using the following base symbols, ranked in ascending order based on their value: 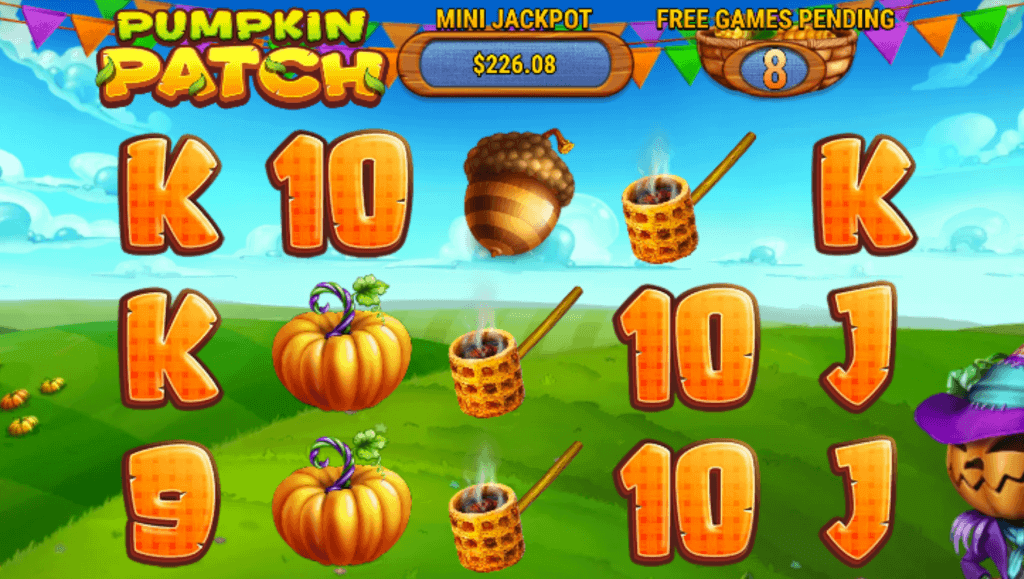 Both the Pumpkin Man and Wild symbol substitute for all other symbols in a winning combination, just like you’d expect, but the Wild symbol does not substitute for the Pumpkin Man which is used for a bonus (see below). They are also the most valuable symbols in the game when they form their own winning combination, which could be a mixture of the 2.

Pumpkin Feature. You can’t have a pumpkin slot without a pumpkin feature, right? Unlike you’d normally see from other games out there, Pumpkin Patch uses the regular base symbols in their features so there are no special Scatter symbols in the game. Instead, if a Bird symbol appears adjacent to a Pumpkin symbol on the screen, the Pumpkin symbol will expand into Wild symbols to cover all the positions on the reel before pays are awarded. In a similar fashion, if a Squirrel symbol appears next to a Pumpkin symbol, then the Pumpkin will turn into a Wild symbol before pays are awarded, but the symbol will not expand. An easy way to remember which does what is that the Squirrel symbol is less valuable and so has less of an impact on the feature. Multiple combinations on the screen are performed randomly.

Free Games Bonus. If 3 or more Pumpkin Men symbols appear anywhere on the Screen, excluding Wild symbols, then the Free Games Bonus is triggered. During the Bonus, all payouts are tripled to give you some much-improved wins. Naturally, bets are played at the bet of the game which triggered the bonus. If you manage to land 3 or more Pumpkin Men symbols during the bonus, you’ll be given another 8 free games to work with. Furthermore, if any Sweetcorn symbol appearing as part of a winning combination during the BASE GAME, these will be added to the Free Games Pending count. If you manage to collect a rather steep 30 of these in the base game, the Free Games Bonus is also triggered. If a Sweetcorn symbol appears in a winning combination during the Free Games, these will be added to the Free Games Left count and are saved for each bet configuration, starting at 8. 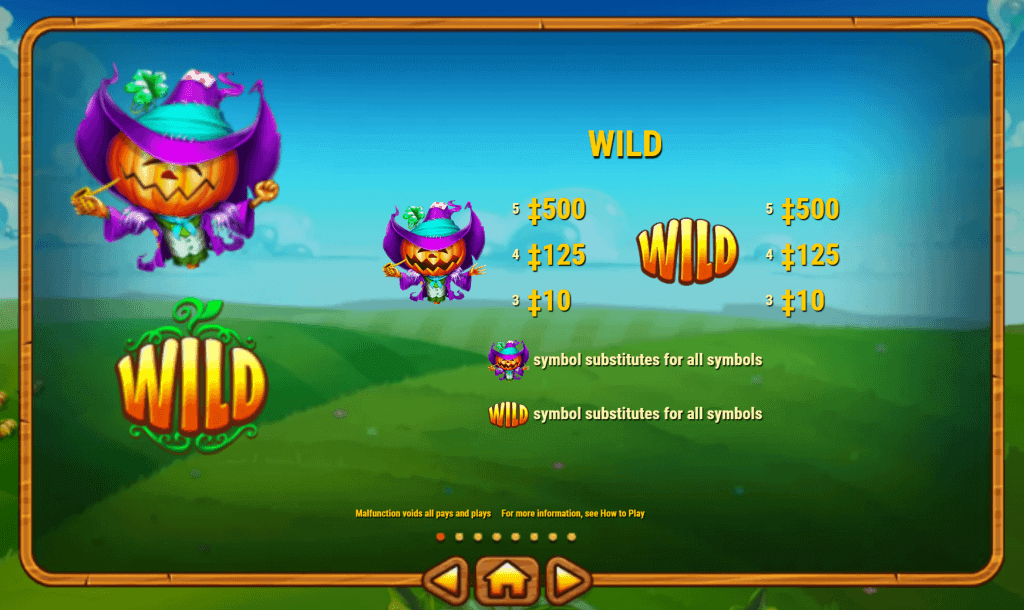 Pumpkin Patch slot from Habanero isn’t really a Haloween slot, at least it’s not spooky. Instead, what it is is a bit of fun with some pretty simple features that are surprisingly effective. The Pumpkin Feature is a nice way to offer additional Wild symbols at random to hopefully give you some extra wins. The Free Games Bonus can be triggered in 2 ways which I quite like and can be continuously triggered by landing more Pumpkin Men on the reels. The best thing about this feature is, of course, the multiplier of 3x applied to all wins. And lastly, this slot is one that pays both left to right and right to left, something you don’t see very often but is of course more than welcome. You also have a progressive jackpot which no-one can have a problem with. All of these things together make for an enjoyable and rewarding slot that is easy to recommend.